In ‘Heart of the World,' a legendary scientist and outdoorsman confronts a fatal diagnosis 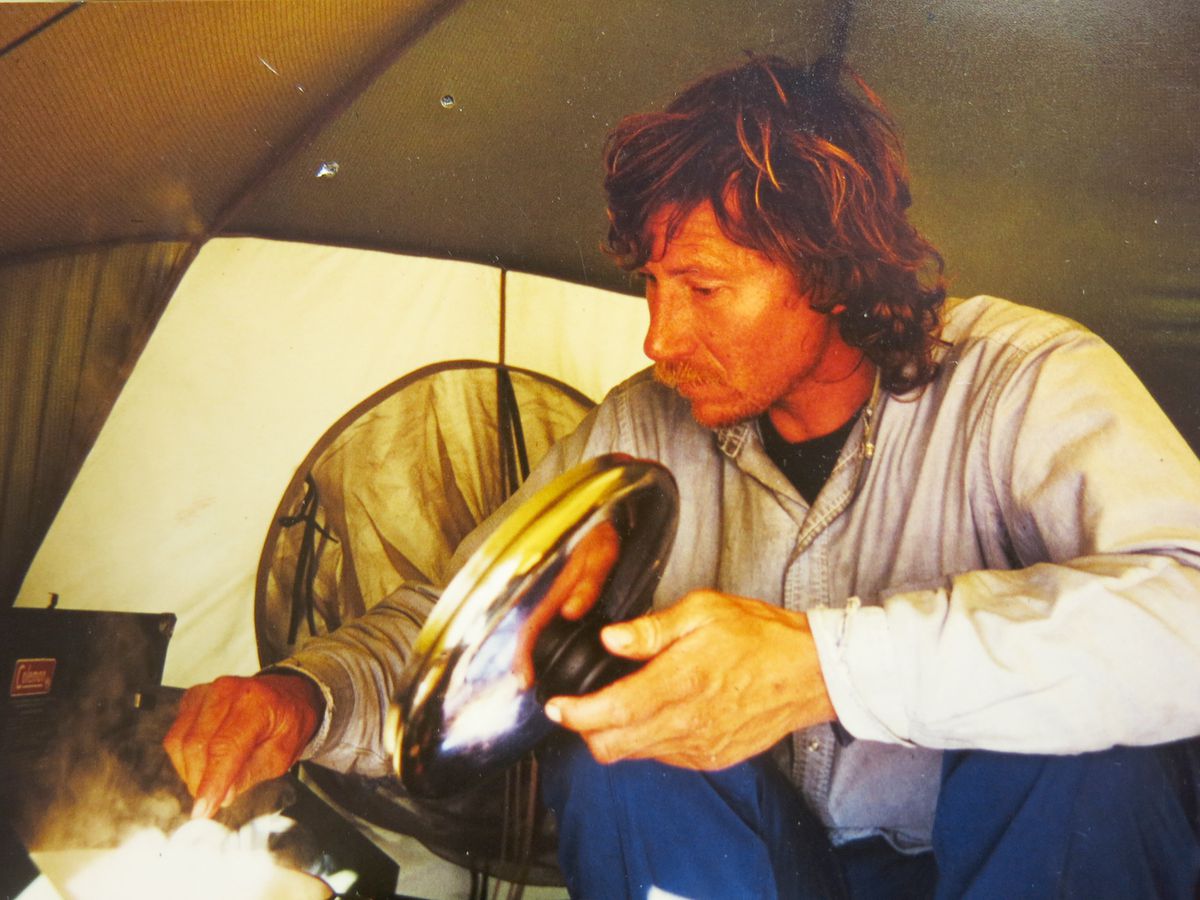 The Heart of the World: The Life and Death of a Glacier Pilot

By all rights, Keith Echelmeyer could have died any number of ways. A professor of geophysics at the University of Alaska Fairbanks, Echelmeyer was a climber and backcountry maniac who gladly took risks to reach summits and cross landscapes. Falling off a peak or getting swept into a river wouldn’t have been surprising. Nor would dying in an aviation mishap. He was a glacier pilot who crashed at least four times.

Instead, Echelmeyer died peacefully at home after fighting brain tumors for eight years. And in his drive to live as fully as humanly possible in the face of impending demise, he became an inspiration to pretty much all who knew him. He died as he had lived: by his own rules.

Ned Rozell, the longtime author of the weekly Alaska Science Forum column produced by the UAF Geophysical Institute and published in newspapers statewide, was one of those who watched in awe as Echelmeyer showed through his death how to live. In his latest book, “The Heart of the World,” Rozell introduces readers to a man he knew, and shares with readers the lessons to be drawn from Echelmeyer’s passage through and out of this life.

Rozell acknowledges late in this book that prior to Echelmeyer’s diagnosis, he had always been a bit intimidated by the man. Though no slouch himself in areas like climbing, wilderness racing and distance running, Rozell could never keep pace. Apparently no one could.

“He was the hardass academic and field advisor to my graduate student friends,” Rozell writes. “They could not match his intellect, nor endure cold as well as Keith, nor carry as much on their backs. And he let them know it.”

Echelmeyer was one of those people who could do it all well, and who couldn’t understand why others lacked the same magic. And yet, Rozell explains, that same aptitude for confronting any hurdle as a challenge rather than a setback is what drove him to keep reclaiming every inch of ability — both physical and mental — that cancer stripped from him. And along the way Echelmeyer softened too. He came to embrace others more thoroughly than ever.

“He always had a smile and opened his arms for a hug,” Rozell writes of his encounters with Echelmeyer during his final years. “That hit me in the heart every time. Who is this new guy? And how can he be so happy after losing so much?”

Those questions have never left Rozell, and now, nearly a decade after Echelmeyer’s 2010 death, he shares some of his answers.

As a pilot and scientist, Echelmeyer studied glacier activity, devising ways of taking measurements that helped clarify the rate of ice loss in Alaska. The finding that cemented his legacy was contained in a 2002 paper that showed how ice melt in Alaska over the half century preceding publication had contributed twice as much to global sea level rise as runoff from the Greenland ice sheet.

This paper, the capstone of Echelmeyer’s professional career, more or less coincided with his diagnosis. In that same year, he flew his plane to Yakutat for a conference and, shortly after arrival, suffered seizures, which abruptly ended his piloting days. He was rushed to Anchorage for tests, a large tumor was discovered in his brain, and life as he had always known it was over.

As an author, most of Rozell’s work has been in the form of short articles that tell complete stories capturing the full who, what, when, where, why and how that journalists are trained to uncover. He’s one of Alaska’s most skilled writers in this regard, and his approach is carried over into this book. Rather than write a birth-to-death biography of Echelmeyer, Rozell has captured certain scenes from his life and made these short stories in themselves which, added together, tell the longer tale.

Thus we don’t get a whole lot about Echelmeyer’s childhood, although we do learn of his strained relationship with his father (the elder Echelmeyer developed and died from bone cancer in the years between his son’s own diagnosis and death). We also don’t learn a lot about his education and formative years as a scientist.

What readers get instead is what Rozell does best: They get taken along for rides. Rozell’s column approach, where he tags along with scientists in the field and introduces them and their work, is replicated here. What Rozell does in his columns, when presenting a individual to readers, is offer a few anecdotes that capture the character of this person, leaving readers feeling as if they had met him or her, and with an understanding of how these individuals interact with their jobs and the broader world.

Thus in one chapter we join Echelmeyer and a pair of associates taking measurements from a Piper PA-12 flying over glaciers in the Chugach Mountains, where Echelmeyer’s aloofness creates a bit of tension. In another chapter we find him and an assistant throwing spruce trunks on the West Fork Glacier to measure glacial flow, and learn why so many students decided flying with Echelmeyer was too big of a risk.

Post-diagnosis, Rozell follows Echelmeyer onto the trails north of UAF, where he succeeded at regaining his skiing skills despite severe balance issues wrought by the tumor. Then we’re transported several years later to the Canning River, the scene of Echelmeyer’s final attempt at a backcountry excursion, where his wife, Susan Campbell (who has hand-drawn the maps in this book), had to accept that Echelmeyer’s tumors (by then he had two) were finally cutting him down.

These scenes and others give readers a feel for who Echelmeyer was and why the manner in which he died — at home and on his own terms — was so in keeping with how he lived. Rozell has said that he feels Echelmeyer died as good of a death as possible, and it’s this lesson that he conveys in this short but moving account of one man’s living and dying.