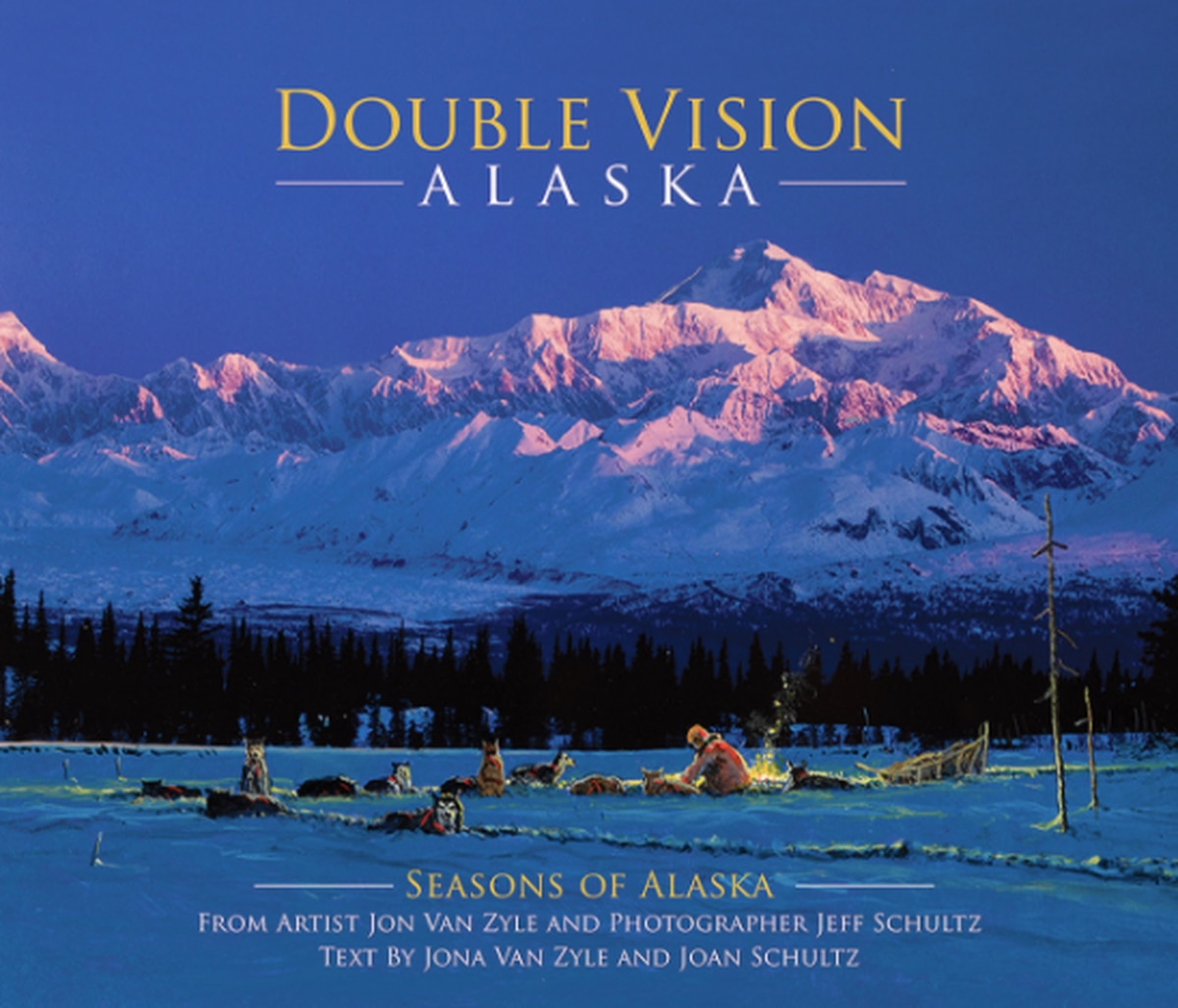 Painter Jon Van Zyle and photographer Jeff Schultz are well-known and commercially successful Alaska artists who are also friends. In this beautiful large-format book, they’ve collaborated to share the four seasons of Alaska through their imagery. Their wives have joined them in the project with texts that further illuminate Alaska life as well as circumstances surrounding the making of the art.

Van Zyle is particularly known for being the official Iditarod Trail Sled Dog Race artist since 1979; his posters capture the romance of the trail and the lives of mushers and their dogs. He’s also known for his Alaska landscapes and wildlife portraits and as the illustrator of more than 40 children’s books. Schultz has been the official Iditarod race photographer since 1982 and has otherwise built an impressive career documenting the natural beauty of Alaska. Both men — and their wives — have traveled the state widely, and their work is filled with scenes of glaciers, bears, eagles, fields of fireweed, auroras, log cabins with chimney smoke and other iconic imagery.

“Double Vision Alaska” is organized around the four seasons, beginning with spring light and migrating birds, and proceeding through the year. The lay-out most often situates complementary imagery on facing pages. For example, a Schultz photo of a sleeping sled dog on one page pairs up with a Van Zyle painting of a sleeping dog team opposite it. These pairings truly do provide viewers with a sort of “double vision” for contemplating the romance of Alaska. Sometimes one needs to look closely to determine whether a particular image is photograph or painting.

Most unique in the artistic partnership and the resulting book is what the artists call “creative combination pieces.” In this collaborative process they choose a Schultz image — most often including dramatic distant mountains — and then brainstorm how the image might be enhanced. Van Zyle sketches possibilities —usually foreground figures — and after the two merge their concepts, he paints directly on the photo paper. The book cover is one of these, with sunlit snowy mountains and spruce forest as the background (photo) and a musher with his dogs camping by a sparking fire in the foreground (painting.)

Another of the combinations starts with a photo of the Palmer Hay Flats Refuge and Pioneer Peak and includes a painted pair of nesting swans in the foreground, with painted vegetation overlapping with that in the photograph. In yet another, the photograph is a close-up of dogs sleeping on straw and partially covered with snow. Van Zyle has added food bowls and ravens, a small musher in the distance, and a log cabin with a lighted window.

The short texts by Jona Van Zyle and Joan Schultz that accompany each artwork are both informative and entertaining. They identify locations and often share facts about the subject matter — how many moose live in Alaska, how hoarfrost forms, the edibility of fireweed, why you should not feed birds in the summer — or the inspiration or technique behind a work.

In a “winter” pairing, Joan explains how the photo, which might have been a static scene of low sun and frosted branches, was brought alive when her husband accidentally stumbled into a tree and set loose a “snow” of falling ice particles. He then set up a shot and purposely bumped another tree to create the “magic” he wanted to invoke. About the painting on the opposite page, Jona writes, “Jon also likes to experiment with capturing different weather conditions in his art. It was a risky move to cover his detailed painting of a musher and his dogs with blobs of white paint, but it worked.”

Elsewhere Joan explains her husband’s technique of “turning the sun off” with a very dark natural density filter that allows longer exposures. This gives water a soft, “silky” look. The photo discussed is of a lake with icebergs and a single yellow aspen leaf placed by Schultz for its color.

Van Zyle’s work here includes his 2005 Iditarod print of nine huskies lounging on and around a living room couch. Jona comments about this one: “Our dogs happily posed, spending long hours on the sofa. The most amazing part to me was that Jon was able to recreate many of his earlier Iditarod posters in miniature to hang on the wall as background.”

Regarding one of Van Zyle woodpile paintings, which includes a fluffed-up redpoll sheltering beside snow-dusted logs, Jona explains that when the woodpile series was exhibited in Europe, Swiss men seemed most interested in the fact that the wood was not cut and stacked as neatly as it should have been.

“Double Vision Alaska” will be treasured by the many fans of these two artists, not just for the examples of their individual art and collaborations but for insight into how the two experience and frame their worlds. It will also delight anyone anywhere who might appreciate the natural and artistic beauty we’re so lucky to find around us.