Reviving the Haida language through film in Canada 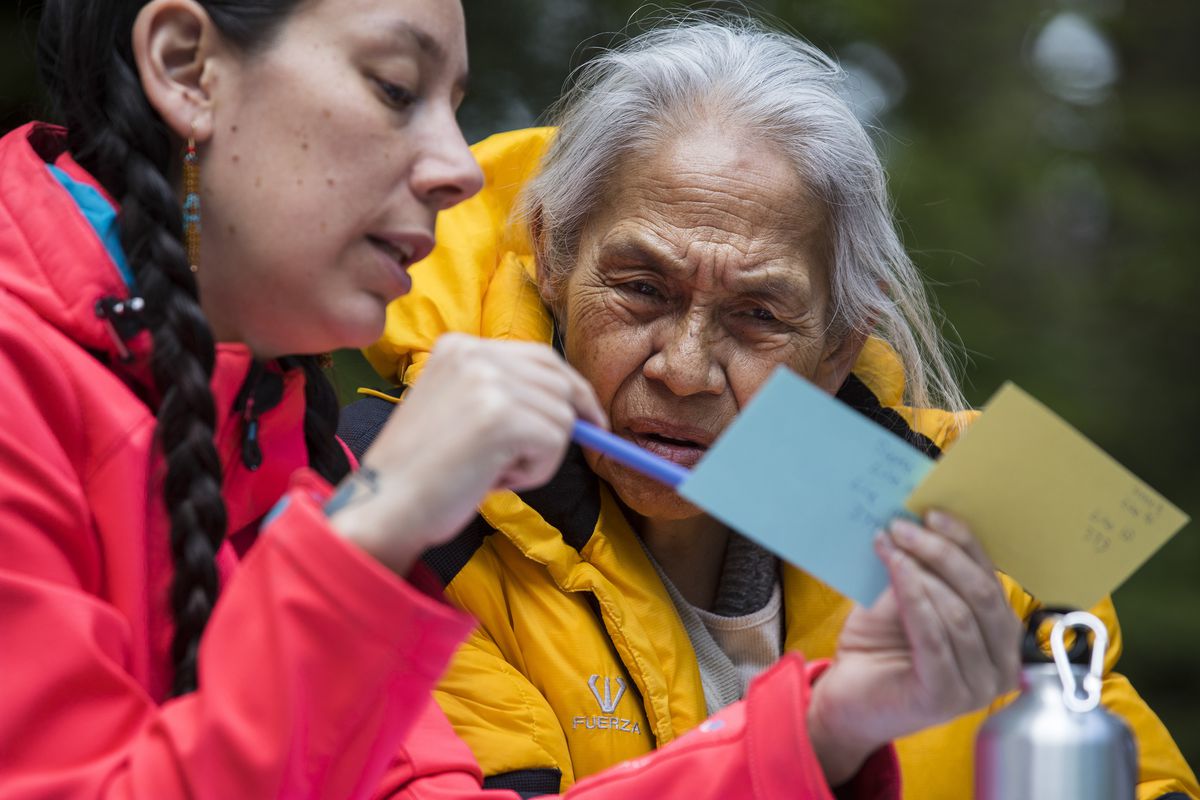 Sphenia Jones, 73, gets language help from Erica Ryan-Gagne, while rehearsing lines for “The Edge of the Knife,” on Graham Island, British Columbia in Canada, April 20, 2017. Like 150,000 indigenous children across Canada, Jones was sent far from home to a residential school to be forcibly assimilated into Western culture. (Ruth Fremson/The New York Times)

Sphenia Jones, 73, gets language help from Erica Ryan-Gagne, while rehearsing lines for “The Edge of the Knife,” on Graham Island, British Columbia in Canada, April 20, 2017. Like 150,000 indigenous children across Canada, Jones was sent far from home to a residential school to be forcibly assimilated into Western culture. (Ruth Fremson/The New York Times)

HIELLEN, British Columbia — Speaking Haida for the first time in more than 60 years looked painful. Sphenia Jones' cheeks glistened with sweat, and her eyes clenched shut. She tried again to produce the forgotten raspy echo of the Haida k', and again she failed. Then she smiled broadly.

"It feels so good," Jones, 73, said. "Mainly because I can say it out loud without being afraid."

Like 150,000 indigenous children across Canada, Jones was sent far from home to a residential school to be forcibly assimilated into Western culture. There, any trappings of her native culture were strictly forbidden. When a teacher caught Jones learning another indigenous language from two schoolmates, Jones said, the teacher yanked out three fingernails.

It worked: Jones spoke nothing but English, until recently, when she began learning her lines in the country's first Haida-language feature film, "Edge of the Knife."

With an entirely Haida cast, and a script written in a largely forgotten language, the film reflects a resurgence of indigenous art and culture taking place across Canada. It is spurred in part by efforts at reconciliation for the horrors suffered at those government-funded residential schools, the last of which was closed only in 1996.

Restoring the country's 60 or so indigenous languages, many on the verge of extinction, is at the center of that reconciliation.

The loss of one language, said Wade Davis, a University of British Columbia anthropology professor, is akin to clear-cutting an "old-growth forest of the mind." The world's complex web of myths, beliefs and ideas — which Davis calls the "ethnosphere" — is torn, just as the loss of a species weakens the biosphere, he said.

A Haida glossary dedicates three pages to words and expressions for rain.
"English cannot begin to describe the landscape of Haida Gwaii," the Haida homeland, Davis said. "There are 10,000 shades of nuance and interpretation. That really is what language is."

Fewer than 20 fluent speakers of Haida are left in the world, according to local counts. For the Haida themselves, the destruction of their language is profoundly tied to a loss of identity.

"The secrets of who we are, are wrapped up in our language," said Gwaai Edenshaw, a co-director of the film, who like most of the cast and crew grew up learning some Haida in school but spoke English at home.

"It's how we think," he continued. "How we label our world around us. It's also a resistance to what was imposed on us."

Edenshaw was a co-writer of the script for the 1.8 million Canadian dollar ($1.3 million) film, which is set in Haida Gwaii — an archipelago of forested islands off the west coast of Canada — during the 1800s. It tells an iconic Haida story of the "wildman," a man who is lost and becomes feral living in the forest. In this version, the wildman loses his mind after the death of a child, and is forcibly returned to the fold of his community in a healing ceremony.

The script was translated into two remaining, distinct dialects of the language: Xaad Kil and Xaayda Kil. None of the stars are conversant in either dialect. The crew held a two-week language boot camp in April so cast members, who also have little or no acting experience, could learn to pronounce their lines before filming started in May.

"I'm not used to using my mouth like that," said William Russ, 37, who sat on the floor of a long house.

At his feet was a black speaker, which replayed the recording of a Haida elder saying a line that in English seemed to capture his predicament: "You are so careless, Aditsii. Everything is crumbling around you."

In Haida, it was twice as long, and included a series of G's, meant to echo from the back of the throat.

"It's like we learned from the ravens and birds — all those clicking sounds," Russ said.

That the Haida language is so threatened might surprise Canadians, as the Haida are nationally known for their political and cultural strength. They formed their own local government in 1974, and in 2002 filed a land claim for the entire archipelago in a Canadian court. (A trial date has still not been set.)

But that political and cultural resurgence has not spread to the Haida language, despite many grass-roots efforts.

"The language was dying before me," said Diane Brown, 69, the archipelago's best-known language advocate, who started to teach Haida in schools in the 1970s. "The elders would say: 'What will we call ourselves, if we don't speak Haida? Who is going to talk to the ancestors?'"

In 1998, Brown helped found the Skidegate Haida Immersion Program to teach the southern dialect, but the program's focus quickly shifted to preservation, drawing elderly speakers to record commonly used phrases and lessons onto thousands of audiotapes.

Each death meant one fewer person to practice with. But tentative learners have also faced local resistance, said Jaskwaan Bedard, who has worked for 14 years to be "approaching fluency." She is finishing her degree to teach Haida-as-a-second-language classes in local high schools.

"How the language was lost was very traumatic," she said. "That's one of the barriers — working through the trauma."

The experience shows how difficult it is to regain a language, once it is silenced. The Haida language is particularly hard for English speakers to learn, according to Marianne Ignace, director of the First Nations Language Center at Simon Fraser University in Burnaby, British Columbia.

Unrelated to any other language, its grammar is complex and its structure polysynthetic; a verb conveys not just action but a wealth of other information. Then there is basic pronunciation. Haida has some 35 consonants and two tones. There are 20 sounds that do not exist in English.

"If you don't speak it, you lose the hollow in the side of your cheek," Jones said, inserting the lid of a pen into her mouth so she could produce the Haida "hl."

The film would seem cripplingly ambitious if not for the record of the executive producer, the Inuit director Zacharias Kunuk. He made his name with "Atanarjuat" ("The Fast Runner"), which depicted an Inuit folk epic and starred untrained Inuit actors speaking their traditional language, Inuktitut.

That film won the Caméra d'Or at the Cannes Film Festival in 2001, and is still considered one of the best Canadian films of all time.

But the casts of "Atanarjuat" and of Kunuk's subsequent films were fluent in Inuktitut, one of three indigenous languages still widely spoken in Canada.

"We financed enough to produce the film," said Jonathan Frantz, the producer and director of photography, who works for Kunuk's production company, Kingulliit Productions. "There's no extra money for language-learning. That is a $100,000 multiyear project on its own."

If delivering the lines proves too difficult for some cast members, he will resort to adding them in later, he said. But ultimately, the movie is "about sustaining the language and culture through authentic representation."

In Haida Gwaii, the film is a desperately needed boost to the economy on the reserves, where unemployment is estimated at 70 percent.

Local builders constructed a long house on the site of an old traditional village where the film is being shot. Local weavers made the costumes. A Haida artist tattooed clan crests on the chests and arms of willing actors in the traditional stick-and-poke fashion.

A local musician, Vern Williams, was hired to create songs for the film. During the evenings of the language camp, he pulled out his guujaaw — drum — and filled the long house with his low, mournful voice.

"I don't call this reconciliation," he said. "Something was taken. We are taking it back."

Canada's Truth and Reconciliation Commission released its damning report two years ago, shocking Canadians with haunting accounts of sexual abuse, physical abuse and neglect that indigenous children suffered in the residential schools over more than a century. The report outlined 94 recommendations — "calls to action" — which various governments, institutions and citizens across the country are grappling with, particularly this year, Canada's 150th anniversary.

The commission called on the government to invest heavily in the revitalization of indigenous languages, noting it spends just CA$9.1 million on programs supporting dozens of them each year, compared with CA$348.2 million on the country's two official languages, French and English.

In December, Prime Minister Justin Trudeau's government increased annual funding for indigenous languages to CA$23 million and promised to introduce an Indigenous Languages Act to protect them. To date, that has not happened.

"This is fundamental to our survival as indigenous people," said Perry Bellegarde, national chief of the Assembly of First Nations, which represents 634 reserves in Canada. He was optimistic that the law will be introduced in next summer, and come with "as much resources to promote the languages as they did to kill them."

After a long day of stumbling over pronunciation, Russ, one of the actors, sat by the wood stove with his script open on his lap, enjoying Williams' music for a moment. He had circled every line he found difficult, which were all 37.
His relaxation did not last long. "I'm starting to feel overwhelmed," he said, heading outside to practice.

Two weeks was not enough to learn pronunciation, let alone memorize his lines. Then, he had to learn how to act.