‘Edge of Alaska’ is back, with farmsteading and snowmachine rescues in McCarthy 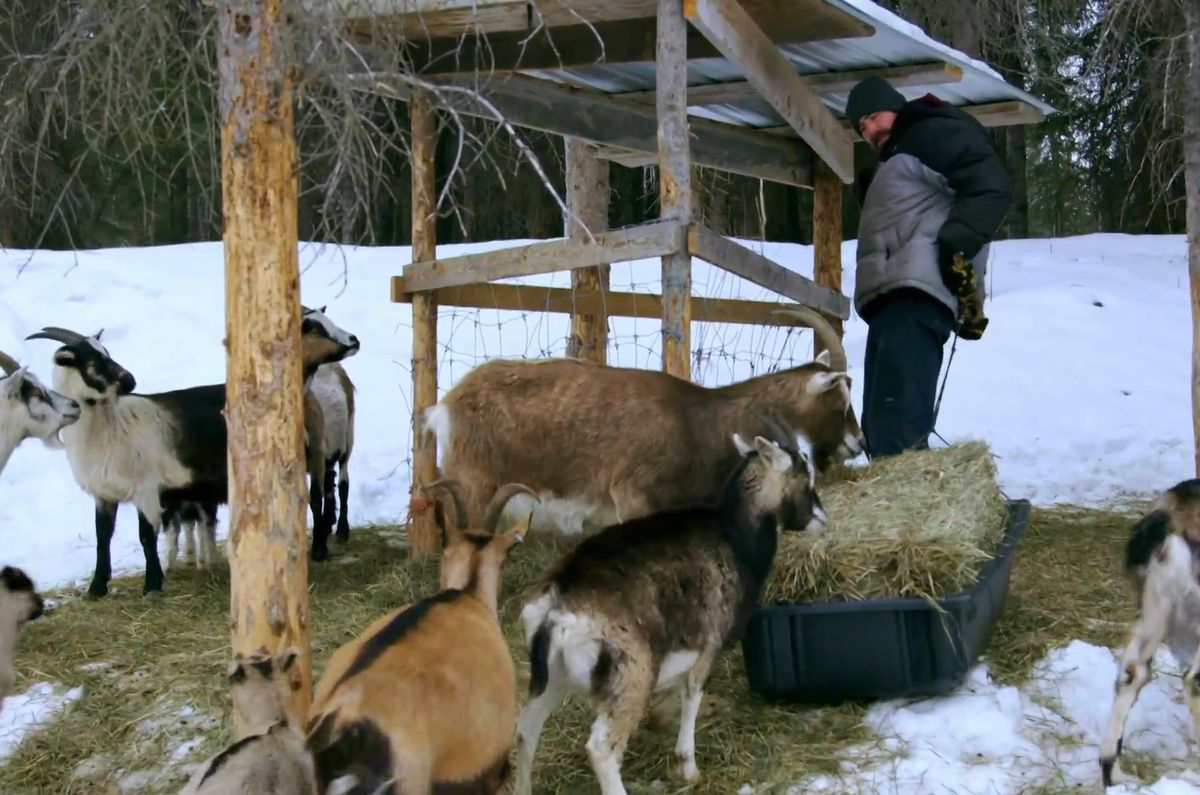 Jeremy Keller and his goats in McCarthy (Screen capture via Discovery)

Jeremy Keller and his goats in McCarthy (Screen capture via Discovery)

"Edge of Alaska" is back on the fiber-optic cables and off to a familiar start. It appears to be spring in McCarthy, since there is both ample snow and daylight.
The season four premiere starts with Jeremy Keller and his family having a wholesome day climbing trees on what the Discovery Channels refers to as the Kellers' "farmstead."

What is a farmstead? Some quick, "let me Google that for you" detective work leads first to the dry Merriam-Webster definition that it's "the buildings and adjacent service areas of a farm." But further research indicates this is more of a hipster "movement." Basically, homesteading (being completely self-sufficient and off the grid) + farming (producing food for profit) = farmsteading (making food for monies AND to be self-sufficient). Thanks, internet. Now back to "Edge of Alaska."

The Kellers are on a mission to find an old broken-down bulldozer that has been chilling in the woods since the 1970s. With the help of the local "cowboy in the sky" (aka, pilot with a Western hat), Gary Green, the Kellers find the bulldozer. After Jeremy teaches his kids how to dig using a snowshoe, the old tractor starts for the first time in more than 40 years. More importantly, while trying to start the bulldozer, Jeremy laughs at his kid's fart jokes and answers millions of questions about sticks, fire and snow. Killing it as a dad suits him better than fighting with the Warren Buffett of McCarthy, Neil Darish.

Neil, the show's resident plot driver and owner of 90 percent of McCarthy's businesses, is meeting with old-timer Tim Mischel to see if he can buy some mountaintop property from him. Neil needs the property for his newest idea of building a ski gondola from the Kennecott Mine to the Mother Lode Mine with a halfway point at Tim's property. Tim says he can buy it for four times what Neil was anticipating on paying and/or $500K. You gotta spend money to make money, Neil. But also, more money, more problems. And other platitudes about tough financial decisions.

['Edge of Alaska' gets into the Mother Lode mine]

Next, we have Mark Wacht, who starts the episode off by shooting a battery because it no longer works. We meet recent Kentucky import/Mark's future wife, Livvi, as the two set out on a spring adventure. They snowmachine out to an ice arch and kiss a lot. Mark and Livvi get some "Reality Check" points (which can be redeemed for absolutely nothing) for having the behind-the-scenes crew intervene after they have a snowmachine wreck.

And that's about it for episode one of "Edge of Alaska." The show airs on Sunday nights on Discovery Channel.

Also airing Sunday nights on Discovery Channel is the latest season of "Alaska: The Last Frontier." This season promises some big things. 1. Jewel is back on the homestead, but this time with a chainsaw. 2. Jane yells at Otto on a boat, all "Real Housewives"-like. 3. Someone builds a giant fire way too close to a house with children in it. 4. The Kilchers herd a pack of wild buffalo, maybe with a helicopter. It's unclear if the helicopter is for production of the TV show or herding giant animals.