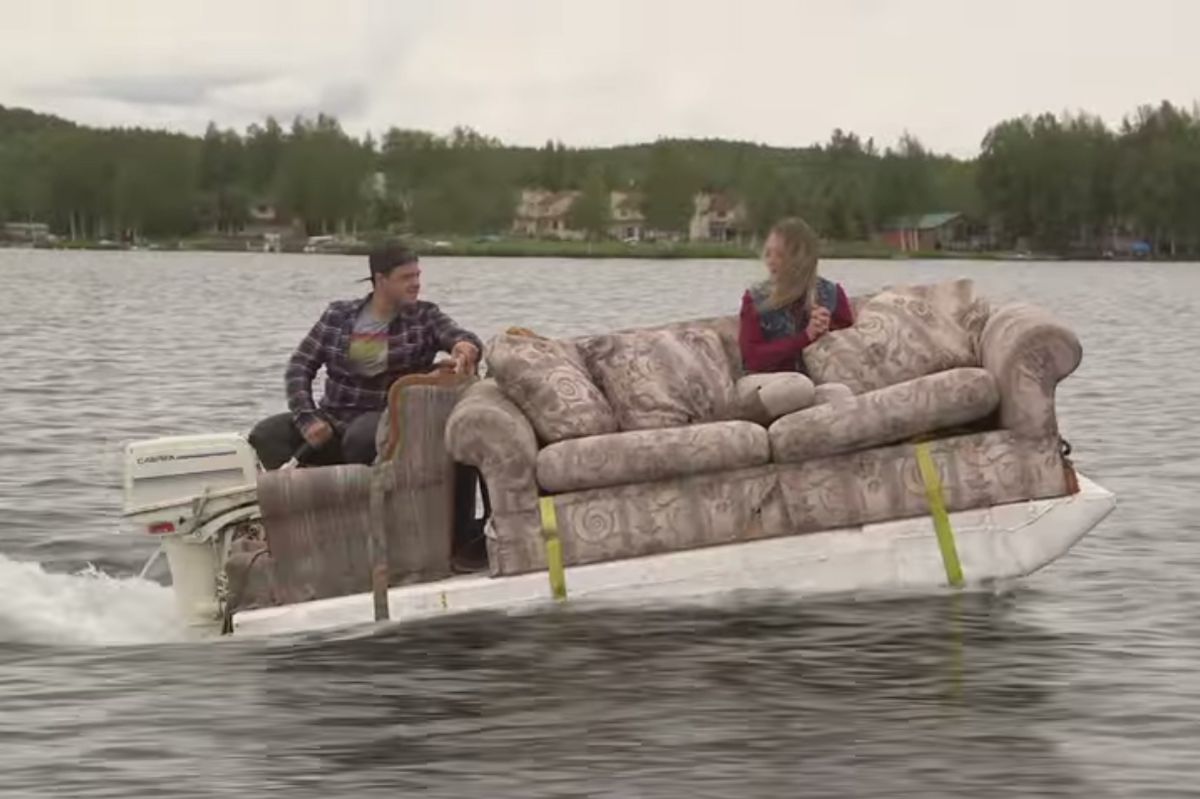 Cast members on MTV’s “Slednecks” cruise on a boat made from a couch. (Screen grab from a promotional video released Aug. 24, 2014)

Cast members on MTV’s “Slednecks” cruise on a boat made from a couch. (Screen grab from a promotional video released Aug. 24, 2014)

Last week I sat down to write a column and the only Alaska reality TV show airing new episodes was "Alaska: The Last Frontier."

They chose to focus on tertiary characters to keep things fresh. As I watched girl-next-door/cool Olympic wrestler/homesteading professional Tela complete tedious home projects, I searched for moments to dissect and mishaps to snark about. Then I realized that the entire episode was a symbol for the state of Alaska Reality TV. It's moved from Iditarod champion Dallas Seavey racing attractive, famous Navy Seals in the Alaska backcountry to watching a neighbor of the Kilchers help her mom out.

Back when Alaska Reality TV was in its heyday, it didn't matter if you were a vodka distiller, veterinarian, big machine repairman, trooper, gun store owner, taxidermist or Sarah Palin's hairdresser — someone would put you on TV. It was a time when TLC (The Learning Channel) would fly a bunch of single Alaska ladies to Miami to find husbands. There were competition shows that were unironically entertaining. Everyone was moving to Nome to mine for gold and ratings, and even youth culture (MTV) was looking to Alaska to find its next hit.

But after five years and 60-plus TV shows, I'm retiring.

In my very first column for this publication in 2013, I publicly confessed that I have a deep, deep love of lowbrow television starring regular people trying to be famous. It's a genre I've watched since I was a child watching a reality TV show about a kids summer camp on the Disney Channel.

So I decided to look through my columns to find some favorite moments from the last five years.

I remember reading the very first press release about "Alaskan Bush People," and learning there was a human in the world named Merry Christmas Catherine Raindrop Brown. And now she's old enough, and more importantly, famous enough, that I follow her on Instagram.

"Alaskan Bush People" also filled me with joy as I wrote about the Brown men-children trying to find wives by asking girls if they liked to climb trees. And it gave all of us the greatest suggestion for a trash-bear problem in the history of bears: "What we need to do is find a baby bear and raise it, and then we'll have our own bear that's on our side."

I got to do an in-depth character study of Trevor Hash, a star of "Slednecks," who for some reason decided to go through life always wearing a helmet and wanting his car to smell like green apple. Of all my interviews over the years, he had maybe the most insightful comeback when I asked him about how much Alaskans hate Alaska reality TV shows: "A lot of people are like 'your show is so scripted and fake.' And I'm like, 'you can't fake being drunk.'"

I heard one of my favorite TV stories from Brian Catalina, an executive producer for National Geographic's "Ultimate Survival Alaska." He was traveling down the Yukon River filming, when he came upon a remote fish camp.

He stopped at the fish camp thinking it would be perfect for his cast to interact with the fishermen. When he asked if they could film the men at the fish camp, one of the men said "I've got a deal with Discovery Channel for a show, and I'm exclusive to them."

That show would become "Yukon Men," and even on one of the most remote rivers in Alaska, everyone had a TV show in the works.

I was pitched a show about a shaman who brings back mammoths and has to save them from trophy hunters; I became a temporary but intense fan of the Barrow high school football team; I was teased with the promise of Sarah Palin presiding over a made-for-TV court room; and I studied where this all began with the OG Alaska show, "Looking for Love: Bachelorettes in Alaska," 15 years after it aired.

It's been a wild, sometimes boring*, ride, but above all it's been "real."

*Remember when "Railroad Alaska" aired a several hour Thanksgiving special that was just footage from the train?