Review: It’s a long shot that rom-com ‘Long Shot’ will entertain you 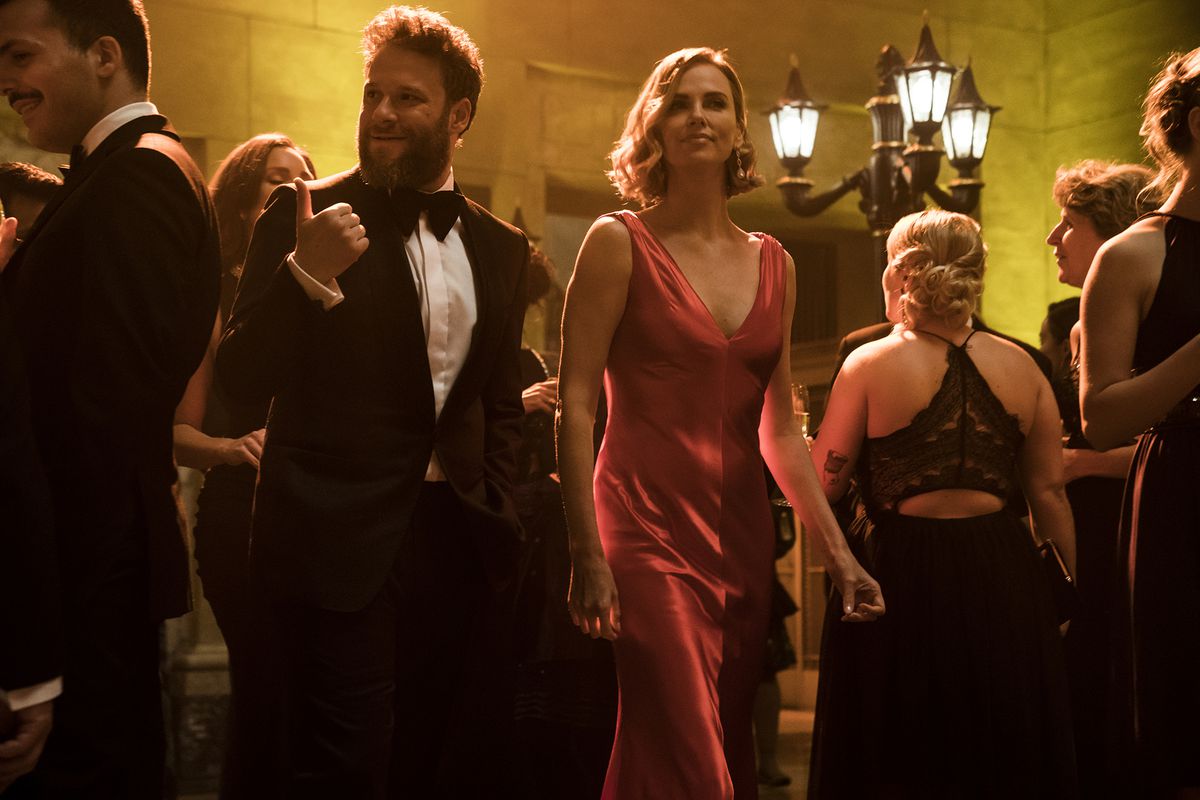 “Long Shot,” a fantasy-fueled romantic comedy starring Seth Rogen and Charlize Theron, establishes its reality-adjacent ethos from the jump: In its tensely amusing opening scene Rogen’s character, an investigative reporter named Fred Flarsky, has infiltrated a neo-Nazi group and is undergoing an initiation, giving halfhearted “Heil, Hitlers” and keeping the sarcastic patter going as he prepares to get a swastika tattoo.

The sequence plays like "BlacKkKlansman's" goofball cousin, made all the more ludicrous when Fred escapes the escalating mayhem by jumping out a window and bouncing off a parked car with nary a scratch. Welcome to the raucous, cheerfully preposterous world of "Long Shot," where slapstick physical comedy, coarse sex jokes and amusingly on-point political commentary are expected to coexist as happily as the self-righteous, adamantly inelegant Fred and Charlotte Field, Theron's pragmatic, sleekly fashionable secretary of state who falls in love with him.

You don't have to suspend disbelief to enjoy "Long Shot." You have to jettison it entirely, along with any sentimental attachments to archaic fundamentals such as sparkling dialogue, organic structure and genuine sexual chemistry. Directed by Jonathan Levine from a script by Dan Sterling and Liz Hannah, this is an awkward, uneven, occasionally very funny amalgamation of traditional rom-com tropes and the kind of sophomoric sight gags that have come to pass for comedy in recent years. The mash-up works only to the degree that viewers are totes OK with letting a bunch of random things happen in no particular order, for no discernible reason other than there might be a punchline at the end.

The success of "Long Shot" also depends on one's tolerance for Rogen, who delivered his finest performance in Levine's touching "50/50" and here reverts to a familiar type: a slightly shambolic guy whose modesty, self-deprecating humor and refusal to conform are supposed to be charming but thinly mask a form of immature arrogance at his core. Rogen's Fred is the Cinderella in "Long Shot." He has harbored a lifelong crush on Charlotte since she babysat him as a kid, and he can't believe his good fortune when she hires him to punch up some speeches for an upcoming international tour.

But unlike some of the laid-back dudes he's played in Judd Apatow movies, here he's the uptight one, expecting ideological purity from Charlotte while she tries to perfect the art of the possible while looking impeccable and not threatening her vapid boss, a TV star turned president played with deadpan smarminess by Bob Odenkirk.

Despite its hit-or-miss satirical aspirations, "Long Shot" has none of the edgy, observational bravura of "Veep." But the movie sneaks in as much side-eye as it can toward the perilously narrow knife-edge powerful women are expected to dance on as if no one is watching. Charlotte, who wants to run for president, is forced to confront poll numbers that question her likability and sense of humor. Her hand-wave is all wrong, and when she needs to grab a bite at a public event, she must crouch down behind her handlers while they form a protective scrum. A running bit in the film involves a Rupert Murdoch-like kingmaker who runs a television network whose perky "Fox and Friends"-like pundits tease upcoming spots like "Are women mentally unfit to hold office?"

Still, for its well-intentioned insights - not to mention the sight of Rogen dressed in a foppishly absurd Swedish costume that makes him look like "Cap'n Crunch's Grindr date" - "Long Shot" ultimately can't escape its male wish-fulfillment roots. Fred might learn to loosen up, and his best friend, played by O'Shea Jackson Jr., manages to shoehorn in a lesson in liberal smugness, but his character still plays like a self-congratulatory archetype. Theron's Charlotte, meanwhile, is the one who makes the most dramatic concession, by way of a Damascus moment that coincidentally centers on a graphic joke reminiscent of late 20th-century Farrelly Brothers. "Long Shot" may not expect to be believed, but it still desperately wants to be laughed at - whatever it takes.