Review: We’re buying what Kirsten Dunst is selling in ‘On Becoming a God in Central Florida’ 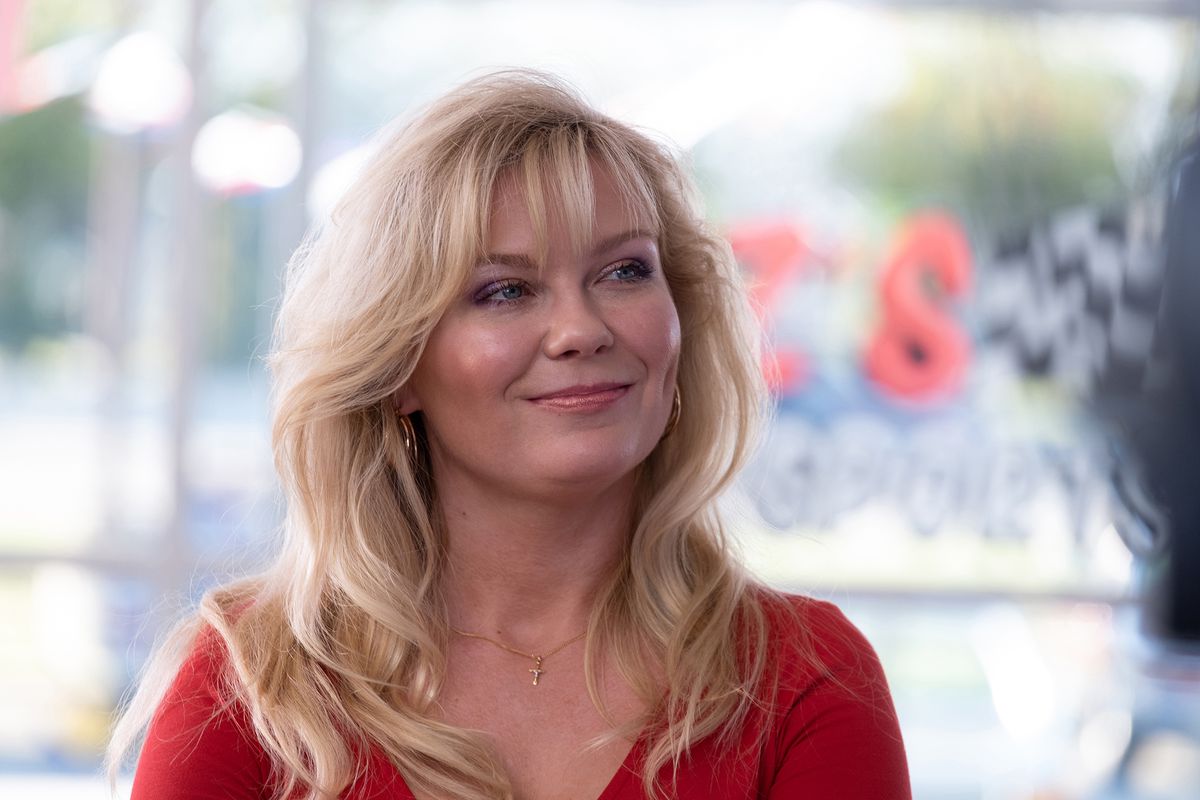 Friends, have I got a TV show for you. True, it has a sort of lame and unnecessarily pretentious title - “On Becoming a God in Central Florida” - but I’m here to tell you it will clean your floors, shine your shoes, organize your closets, brighten your kitchen and, most importantly, enrich your life beyond your wildest dreams.

Or it won't. Still, as darkly comedic dramas about the sorry state of the human condition go, "On Becoming a God in Central Florida" (premiering Sunday on Showtime) is a delectably weird and compellingly realized misadventure tale that makes a spot-on point about the inescapable degree of fraud that infests American-style capitalism and promises shortcuts to making millions.

Although it is set in an "Orlando adjacent" town in 1992, "On Becoming a God" is very much of a piece with all the snake oil being sold to us in 2019: the robocalls asking for your Social Security number; the relentless me-first entrepreneurism that boasts disruption as its primary virtue; the predatory lending; the cultish, $45 spin-cycle classes; and even a flimflam president who is deathly afraid of sharing his tax returns. This show, which shares both the outre mood of AMC's superb "Lodge 49" (currently in its second season) and the criminal lure of FX's "Fargo," is drenched in the idea that life is one big sham. Amid so much TV escapism, I adore its steadfast and believable cynicism.

Travis is utterly suckered into the strategy of selling FAM-branded household goods while recruiting gullible others (known as "downliners") to join the sales force, motivating them to order more stock and recruit still more salespeople, while brainwashing them with costly, FAM-generated cassette tapes that contain lectures of self-determined gobbledygook.

Hounded by his obnoxious "upline" supervisor, Cody Bonar (Théodore Pellerin), an exhausted and delusional Travis finally falls asleep at the wheel and meets an untimely demise when his car plunges into a swamp and he's devoured by an alligator.

That's not a spoiler so much as a setup, as a grieving and now-penniless Krystal turns her rage first toward the alligators (shooting them and then butchering and storing their meat in her spare freezer) and then toward the phony-baloney FAM and the surplus of its merchandise that's stacked in her garage.

Once derided by Travis as a "stinker thinker" for her skepticism about FAM, Krystal belatedly discovers that Travis lost all their money and took out a second mortgage to elevate his status in the program's vaunted clique of sales tiers. At the center of the scheme, a guru named Obie Garbeau II (Ted Levine) is blindly worshiped by Cody and other top sellers.

Krystal, a former Miss All-Terrain Vehicle pageant winner and outspoken employee at a fading water park, tries to mitigate her losses with a FAM-stocked yard sale, but she's quickly shut down by Cody, who informs her the merchandise can only be sold through official FAM protocols. Facing foreclosure on everything from her house to the braces on her teeth (which she removes with nothing more than a bottle of Scotch and a pair of needle-nose pliers), Krystal decides to join FAM rather than fight it.

But even here her ingenuity is thwarted, when FAM shuts down her efforts to recruit her downliners to her jubilant water-aerobics classes at the park. As Cody tries to lure Krystal further into FAM, she decides to take control and thwart the company from within. She's a fierce and fascinating antihero, willing to do just about anything to keep a roof over her head and her baby daughter fed.

In a fit of resentment, Krystal unwittingly recruits her sweet next-door neighbor and manager at the water park, Ernie ("Getting On's" Mel Rodriguez), into FAM, and he, in turn, elevates Krystal and Cody's status by recruiting Spanish-speaking members of his church. Rodriguez gives an achingly beautiful performance, fully expressing the range of Ernie's private anxieties and outward hopefulness. Beth Ditto, who plays Ernie's wife, Bets, just about equals his performance, and together their characters give the series both a moral anchor and a place to unload our sympathies - something that so many similarly twisted TV dramas forget to do.

As both a period piece and a sendup of a certain Floridian soullessness, "On Becoming a God" (created by Robert Funke and Matt Lutsky, with Esta Spalding as showrunner) has a masterful sense of authenticity and restraint. The 1990s are a welcome sight after countless recent TV shows set in the '80s. The timing seems right, as do the atmospheric details - there's even a brief appearance from a glad-handing Vice President Dan Quayle (Joe Knezevich) in full re-election campaign mode.

As I readily binged the entire season's worth of episodes (10 in all), I kept thinking of that strange man whose infomercials used to haunt late-night TV in the '90s, as he would babble on about real estate and "tiny, classified ads." Yes, Don Lapre. I had to Google him to fully recall. He's dead - cut his own throat in jail in 2011, awaiting trial on federal fraud charges.

"On Becoming a God" wallows in that sort of world, and while it gets a tad shaggy toward the finale (which exits on a convincing bid for a second season, without being a cliffhanger), a strong theme of distrust and suspicion carries through, along with a warning: Beware the charlatans in your lives. Unfriend the Facebook acquaintance hawking her "pharmaceutical grade" essential oils. Say no to the sales pitch. Scrutinize the Sunday sermon. Don't answer calls from unknown numbers. Steer clear of gurus. Check your credit. Avoid Florida.

Better yet, avoid everything. Snakes are out there and always have been.

“On Becoming a God in Central Florida” (45 minutes) premieres Sunday at 9 p.m. Alaska time on Showtime.