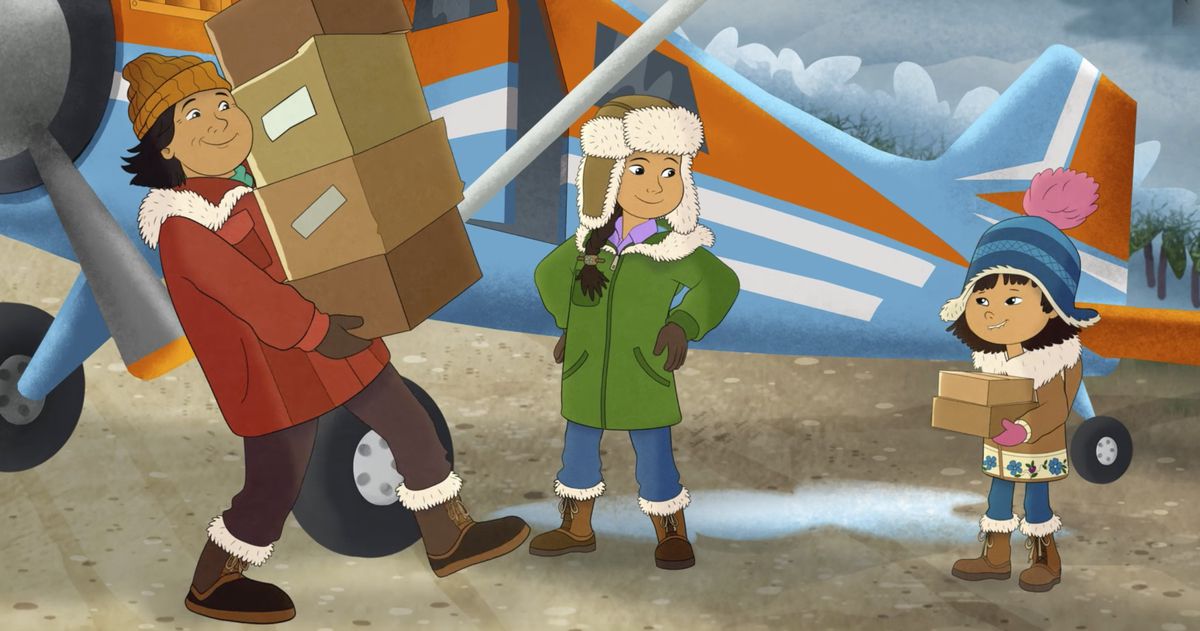 From right, Molly, voiced by Sovereign Bill, her mother, voiced by Jules Koostachin, and father, voiced by Ron Harris, in a scene from the animated series "Molly of Denali." (PBS via AP)

From right, Molly, voiced by Sovereign Bill, her mother, voiced by Jules Koostachin, and father, voiced by Ron Harris, in a scene from the animated series "Molly of Denali." (PBS via AP)

Charitie Ropati watched the pilot episode of “Molly of Denali” in her Columbia University dorm room, huddled around a computer screen with friends.

“We were crying,” Ropati said. “We realized we finally had positive representation.”

"Molly of Denali" is the first cartoon series with an Alaska Native character as the lead. It premiered nationwide on PBS Kids in July.

For many, it is more than a cartoon.

“Watching the show is a way for my Native friends and I to bond,” said 18-year-old Ropati, Yup’ik, who had just moved to New York City from Anchorage and was feeling homesick when the pilot aired. “PBS did such a good job. It is like my siblings, Native youth and myself can see ourselves in it.”

The series, in its first season, has indigenous input at all levels of production, Indian Country Today reported. It includes 38 episodes, a podcast series and a collection of paperback books.

Dorothea Gillim is the series' executive producer, a position she also held on "Curious George." After working in the industry for many years, she says this program is special.

"I've never worked on a show where people tear up on a regular basis," Gillim said.

Gillim says she recently heard about a non-Native family who wanted to make a trip to Alaska after watching the show. They called the Fairbanks Chamber of Commerce to learn more about Alaska Native languages to prepare for their trip.

Her job as executive producer is multifaceted. She raises money for the show while leading a close-knit team. And she was also involved at the earliest moments of the show to choose writers, producers, animators, and voice actors.

One of the talents she gathered was Princess Johnson, Neets'aii Gwich'in. Johnson is the creative producer of "Molly of Denali."

Part of Johnson’s job is to advocate for indigenous representation at every level of the creative process. This means making sure things are done “right” in every episode, interstitial (a short-program shown between episodes that features Alaska Native children), online tools, games and podcast. She also ensures Alaska Natives are included as writers, actors and producers.

There are serious implications to many non-Native people creating media about Native people, a 2018 IllumiNative report says. "The story they adopt is overwhelmingly one of deficit and disparity," the report states. "This narrative can undermine relationships with other communities of color."

Many say "Molly of Denali" challenges that.

More than 60 Alaska Natives participate in the production of the series as writers, producers, voice talent, advisers and musicians. They are from every region of Alaska where the show takes place. For every character who is Native, their voice actor is Native too.

Vera Starbard, Tlingit and Dena'ina, is a writer for "Molly." She says she has worked on many artistic projects that involve Alaska Native people. "I've never experienced this level of dedication to getting it right," she said.

"Usually my job comes with emotional labor of having to educate others," Starbard said. "This time ... my job is just to write."

Starbard says something surprising is how much work happens behind the scenes.

Here's a little bit of how the process works: Writers think of a potential story they pitch to a producer. If their pitch is accepted, they work through many rounds of edits. Writers must decide who the characters are, where the story takes place and what informational text will go into an episode. They have to write every word that a character speaks including where they chuckle or show forms of expression.

After a script is approved and "polished," it is sent to directors and animators. "And then I don't see the story again until it airs," Starbard says.

This entire process takes a while. Starbard's first episode took 18 months before it aired. Because the show is in its first season, animators are tasked with creating entire new towns, characters and worlds.

Starbard has written four episodes so far. She says her life experiences inspire her story ideas. When writing "New Nivagi," an 11-minute story that follows "Molly" while she gathers items to make her grandpa's secret ice cream recipe, she says it reflected an experience she knows.

Starbard grew up in Alaska and says she had to be "pretty creative" to make recipes because sometimes it is hard to find ingredients. So she wrote an entire episode where "Molly" does the same.

Producers of the show use other liberties to showcase Alaska’s diversity. One of “Molly’s” best friends is Tooey Ookami, a 10-year-old boy who is Koyukon, Yup’ik and Japanese. The other is Trini Mumford, a 7-year-old African American girl.

"We wanted to reflect the true diversity of Alaska and the public media," said Johnson. Alaska is home to 229 tribes.

Johnson says it is especially heartwarming to hear about people's reaction to the show.

Johnson remembers being in Anchorage when a young girl's mother approached her to say they recently went to a "Molly" screening. After it was over, her daughter was looking through her closet to find her kuspuk (a hooded shirt with large front pockets) because Molly wore her kuspuk in the show.

Another time Johnson remembers being at a children's museum when a mother said her son was showing interest in his Inupiaq culture because of the show.

"That is the ultimate goal," says Johnson. "It is a joy to see that sort of reaction."

And the reactions are from non-Native people too. Johnson heard a story from a friend's son who watched the show and asked what an ancestor was.

"When I go back to the beginning when I first heard of the show I knew the potential impact that the show could have," said Johnson. She says it has been worth it because of that.

During Halloween, the show released a graphic informing viewers how to dress like "Molly." They were especially cognizant of not telling people to wear her traditional regalia. Instead they encouraged viewers to wear a brown coat and boots, blue jeans and pink mittens. The graphic received traction on social media. It was liked more than a thousand times on Twitter.

Professionally, the opportunity to play a part in the production has opened doors for writers like Starbard. She says she was established in Alaska before "Molly" and now she's considered a national writer.

Starbard said: “This is the definition of a once-in-a-lifetime opportunity.”