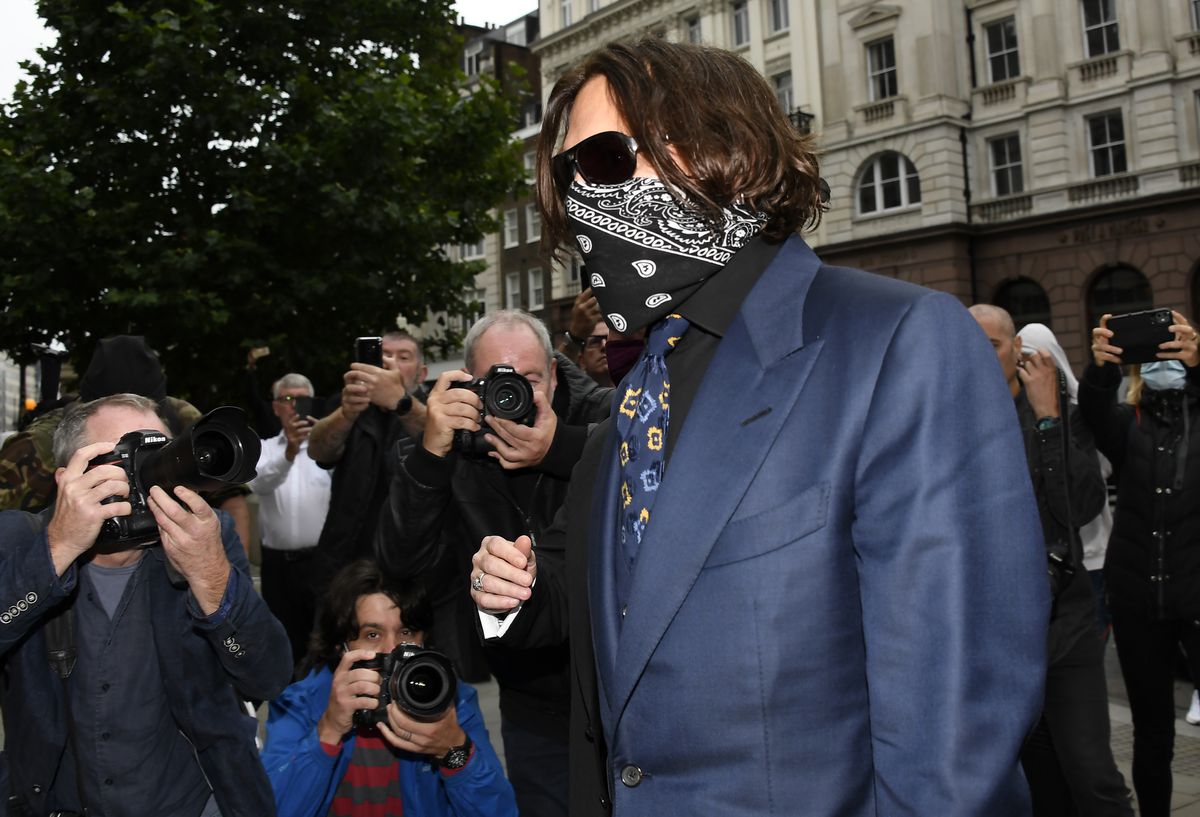 Johnny Depp arrives at the High Court in London, Thursday, July 9, 2020. Johnny Depp is back in the witness box for a third day at the trial of his libel suit against a tabloid newspaper that called him a “wife-beater.” Depp is suing News Group Newspapers, publisher of The Sun, and the paper’s executive editor, Dan Wootton, over an April 2018 article that said he’d physically abused ex-wife Amber Heard. He strongly denies ever hitting Heard. (AP Photo/Alberto Pezzali)

Johnny Depp arrives at the High Court in London, Thursday, July 9, 2020. Johnny Depp is back in the witness box for a third day at the trial of his libel suit against a tabloid newspaper that called him a “wife-beater.” Depp is suing News Group Newspapers, publisher of The Sun, and the paper’s executive editor, Dan Wootton, over an April 2018 article that said he’d physically abused ex-wife Amber Heard. He strongly denies ever hitting Heard. (AP Photo/Alberto Pezzali)

LONDON — Johnny Depp said Thursday that his relationship with Amber Heard was “a crime scene waiting to happen,” but denied assaulting his ex-wife during a drug-fueled rampage in Australia while he was filming a “Pirates of the Caribbean” movie.

The Hollywood star was giving evidence for a third day in his libel suit against a U.K. tabloid newspaper that called him a "wife-beater."

Depp is suing News Group Newspapers, publisher of The Sun, and the paper's executive editor, Dan Wootton, over an April 2018 article that said he'd physically abused Heard. He strongly denies the allegation.

Under cross-examination by The Sun's lawyer, Sasha Wass, Depp depicted a volatile relationship with Heard, during a period when he was trying to kick drugs and alcohol, and sometimes lapsing. He said he came to feel he was in a "constant tailspin" and recalled telling Heard several times: "Listen, we are a crime scene waiting to happen." But he denied being violent.

Depp rejected Heard's claim that he subjected her to a "three-day ordeal of assaults" in March 2015 in Australia, where Depp was appearing as Capt. Jack Sparrow in the fifth "Pirates of the Caribbean" film.

"I vehemently deny it and will go as far as to say it's pedestrian fiction," he said.

Depp and Wass sparred over disputed details of the Australia episode, which ended up with the couple's rented house being trashed and Depp's fingertip being severed to the bone.

Depp accuses Heard of cutting off his fingertip by throwing a vodka bottle at him. She denies being in the room when the digit was severed.

According to Heard, Depp snorted cocaine, swigged Jack Daniels from the bottle, broke bottles, screamed at Heard, smashed her head against a refrigerator, threw her against a pingpong table and broke a window.

"These are fabrications," he said.

He denied taking drugs but agreed that the couple had argued and he "decided to break my sobriety because I didn't care anymore. I needed to numb myself."

Depp agreed with the lawyer that the house was "wrecked" after the couple's argument, which he said was triggered by Heard's unhappiness about being asked to sign a postnuptial agreement.

The court was shown photographs of graffiti-covered mirrors, which Depp acknowledged he'd written on by dipping his bloody fingertip in paint.

But he said Heard was responsible for most of the damage to the house.

"That is completely untrue," Wass said.

"Thank you, but it's not," Depp replied.

Wass also alleged that Depp had lashed out at Heard during an attempt to break an addiction to the opioid Roxicodone on his private island in the Bahamas in 2014.

Wass said that at the time Depp praised Heard's efforts to help him get clean. The lawyer read from a message Depp sent to Heard's mother, saying "your daughter has risen far above the nightmarish task of taking care of this poor old junkie" and speaking of her "heroism."

Heard alleges that Depp became violent towards her. He denied physical violence, but said Heard's claim that he was "flipping" and "screaming" might be accurate.

"I was not in good shape. It was the lowest point I believe I've ever been in in my life," he said.

Depp accused Heard of telling "porky pies" — slang for lies — about his behavior. He acknowledged striking out at objects, saying it was better than "taking it out on the person that I love."

Depp has admitted in court that he may have done things he can't remember while he was under the influence of alcohol and drugs. But he denied he could have been physically abusive and not remember it.

"There were blackouts, sure, but in any blackout there are snippets of memory," Depp said.

The Sun's defense relies on a total of 14 allegations by Heard of Depp's violence between 2013 and 2016.

The case is shining a light on the tempestuous relationship between Depp, 57, and Heard, 34, who met on the set of the 2011 comedy "The Rum Diary" and married in Los Angeles in February 2015. Heard, a model and actress, filed for divorce the following year and obtained a restraining order against Depp on the grounds of domestic abuse. The divorce was finalized in 2017.

The former spouses now accuse each other of being controlling, violent and deceitful during their marriage.

In a text message to his doctor after the Australia altercation, Depp called Heard "malicious, evil and vindictive" and said she was "desperate" for fame, adding "that is probably why I was acquired."

Heard has claimed Depp felt threatened by her career and was jealous of her male co-stars, including James Franco and Billy Bob Thornton.

On Wednesday Wass read the court an email to Depp that Heard had composed in 2013 but never sent, saying he was "like Dr Jekyll and Mr Hyde. Half of you I love madly, and the other half scares me."

Depp accused Heard of compiling a dossier of "hoax" abuse claims and said her claim that drugs and alcohol made him a monster was "delusional."

He also denied claims he hit Heard when she laughed at one of his tattoos, dangled her Yorkshire terrier, Pistol, out a car window and threatened to put the dog in a microwave.

Wass alleged to Depp that by the waning months of the marriage in December 2015, "you were routinely using violence against Ms. Heard when you were intoxicated and when you were angry."

She said that during one fight at the couple's LA penthouse, Depp trashed Heard's closet, slapped her and headbutted her, causing two black eyes.

Depp claimed Heard was the aggressor, and he had only tried to restrain her "to stop her flailing and punching me."

Heard is attending the three-week trial and is expected to give evidence later.