Alaska is the setting of ‘The Great North,’ a new animated comedy from Fox 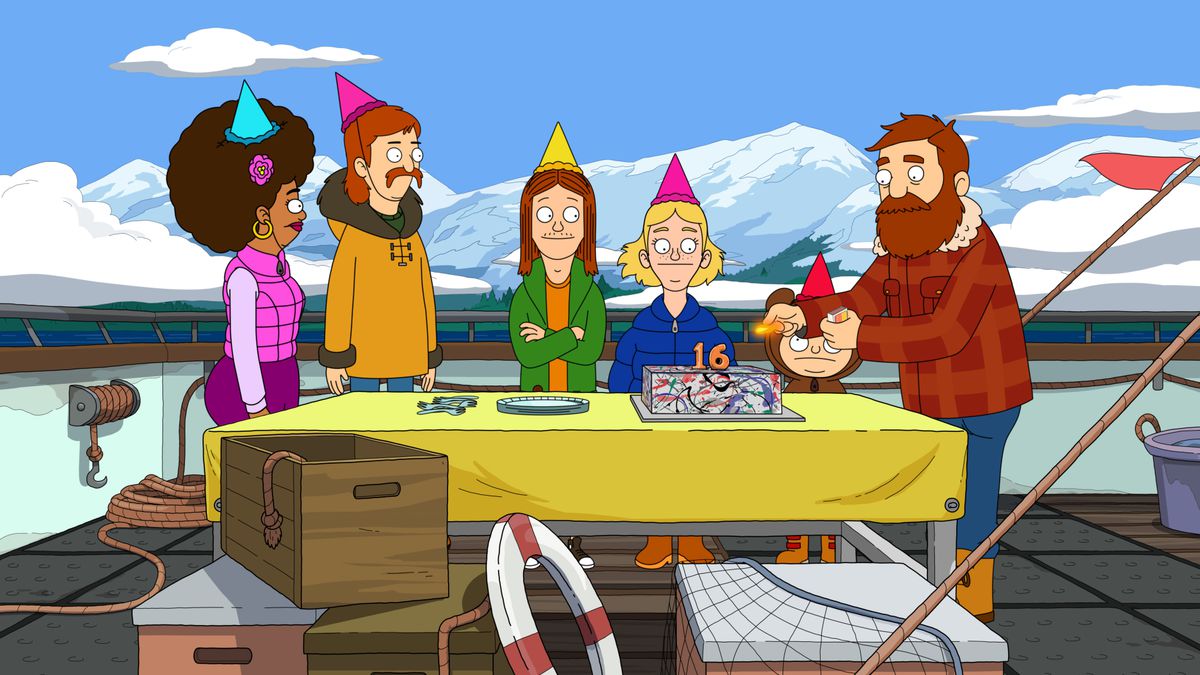 In a preview episode of "The Great North," the family plans Judy's 16th birthday on their fishing boat, but things go awry after a moose breaks into their house. (Image from Twentieth Century Fox Film Corporation)

In a preview episode of "The Great North," the family plans Judy's 16th birthday on their fishing boat, but things go awry after a moose breaks into their house. (Image from Twentieth Century Fox Film Corporation)

“The Great North,” a new animated series set in Alaska from the writers of “Bob’s Burgers” now showing on Fox, has some big names attached to it, including Nick Offerman, Will Forte, Megan Mullally and Alanis Morrisette.

Alaska has set the scene for plenty of reality television, from “Slednecks” to “Deadliest Catch” and “Ice Road Truckers.” Some feature films have even been filmed in state, like “Big Miracle” and “The Frozen Ground.” While PBS launched the children’s show “Molly of Denali” in early 2020, fictional television set in Alaska — especially animated shows — are a rarity.

Offerman (best known for the role of Ron Swanson in NBC’s “Parks and Recreation”) plays single father Beef Tobin, who lives in Alaska with his sons, Moon and Ham, and daughter Judy (Jenny Slate), who talks to her aurora-borealis-inspired imaginary friend Alanis Morissette (voiced by Alanis Morissette). Also in the house is Beef’s oldest son, Wolf, played by Will Forte, and his fiancee HoneyBee, voiced by Dulcé Sloan.

In the first episode, Beef hosts Judy’s 16th birthday on the family boat but gets distracted beforehand by a moose that unexpectedly enters the house. He ends up falling head over heels for Judy’s new boss, Alyson — played by Offerman’s real-life partner Megan Mullally (”Will & Grace,” “Parks and Recreation”).

The show was created and produced by sisters Wendy Molyneux and Lizzie Molyneux-Logelin, who have written for “Bob’s Burgers” since 2012, along with Minty Lewis.

“I have been to Alaska a handful of times to visit my husband’s side of the family and we’ve also attended the Iditarod on a few occasions,” Molyneux-Logelin said in an email. “It is a completely different world up there and the experiences one can have are truly unique.”

The family lives in the seemingly rural, fictional town of Lone Moose, which is surrounded by tall peaks and lies near the ocean, where Beef operates his fishing vessel.

Lone Moose is “the sort of community where everybody values their individuality and privacy, but they also value the mid-sized mall and its myriad retail opportunities,” wrote Daniel Fienberg in a Hollywood Reporter review.

The show features some Alaska talent, including actress Ariel Tweto of Unalakleet, whose family was featured in the reality show “Flying Wild Alaska.” She makes an appearance as Judy’s best friend and schoolmate, Kima, who is obsessed with “Judge Judy” and all things cable television.

“I’ve done six episodes so far. One is a musical, that one was scary,” Tweto said.

Tweto says she had done some voiceover work in the past prior to “The Great North.” She has yet to watch the first episode but says working with the Molyneux sisters has been a learning experience.

“The Great North” debuted on Jan. 3, although the official premiere isn’t until Feb. 14. The series has been renewed for two additional seasons on Fox and can be streamed on Hulu.