In Iceland, a village basks in the glow of an Oscar-nominated song 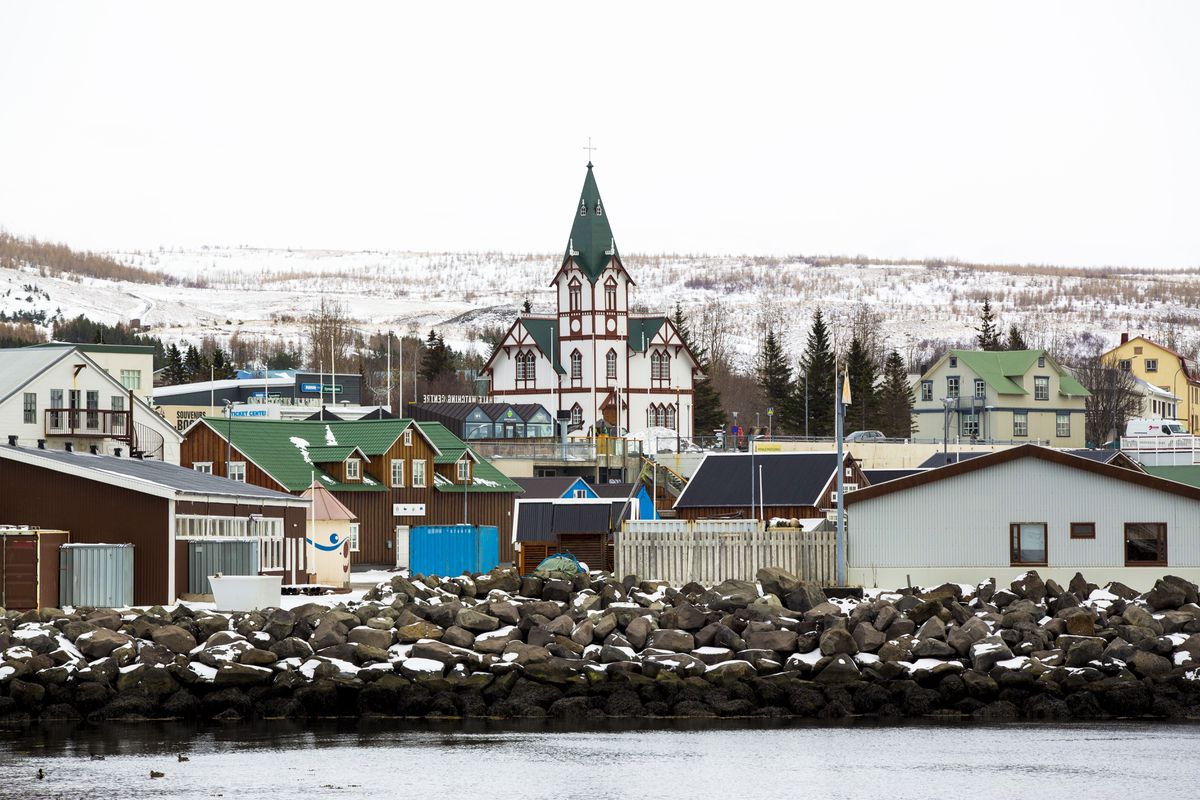 A view of Húsavík, Iceland appears on Thursday, April 8, 2021. "Húsavík (My Hometown)", a song from the film "Eurovision Song Contest: The Story of Fire Saga," is nominated for an Oscar for best original song. The people of Húsavík, a town of only 2,300, have staged a grassroots Oscar campaign on behalf of the song and adopted it as a de facto local anthem. (AP Photo/Brynjar Gunnarsson)

A view of Húsavík, Iceland appears on Thursday, April 8, 2021. "Húsavík (My Hometown)", a song from the film "Eurovision Song Contest: The Story of Fire Saga," is nominated for an Oscar for best original song. The people of Húsavík, a town of only 2,300, have staged a grassroots Oscar campaign on behalf of the song and adopted it as a de facto local anthem. (AP Photo/Brynjar Gunnarsson)

HUSAVIK, Iceland - This is a little folk tale with otherworldly elements, like elves. And gleaming golden statuettes. It is also about some nice things that happened to a tiny town in Iceland, which improbably found itself the setting for a major Hollywood film - and now the namesake for an Academy Award nomination for best original song.

The 2020 Netflix comedy “Eurovision Song Contest: The Story of Fire Saga” isn’t high art, for sure. A review of the reviews by critics on the website Rotten Tomatoes gave it 63 percent fresh rating. Robbie Collin in the Telegraph newspaper pronounced it, “Not a film so much as two hours of lump-free, vaguely film-like audiovisual paste.” It’s not “Nomadland.”

But if the movie is silly, it is also sweet, and audiences gorged on it, sitting on their couches in the middle of a pandemic.

The film tracks the arc of musicians Lars Erickssong and Sigrit Ericksdottir (“probably not” siblings, reread their last names), played by Will Farrell and Rachel McAdams, who hail from the real but fictionalized fishing village of Husavik (population 2,300) on the north coast of Iceland (population 341,243).

After a ship explodes with Iceland’s most popular singers aboard, Lars and Sigrit are chosen to represent their country at Eurovision, the sequined Olympics of kitsch and the over-the-top musical extravaganza that is the most watched non-sporting event in the world, though mostly ignored by Americans.

The movie’s tear-jerker finale features McAdams lip-syncing the Oscar-nominated song “Husavik (My Hometown),” belted out big-time by Swedish performer Molly Sandén, with lyrics such as:

“Where the mountains sing through the screams of seagulls/

“Where the whales can live ‘cause they’re gentle people/

An Oscars pre-show Sunday will include a recording of Sandén singing “Husavik” in the real Husavik. And the townspeople have high hopes for a win. They have produced - and star in - spoofy promotional videos about their town and “what may be the most important night in the history of Husavik.”

“Everybody of course makes fun of us. But we make fun of ourselves, so there is no problem,” Orlygur Orlygsson, who owns a hotel and runs the Exploration Museum in Husavik, told The Washington Post. “We loved the film and we loved the song.”

[Is this an ‘Asterisk Oscars’ or a sign of things to come?]

What is the real town like? “It’s tiny,” Orlygsson said. “Everybody knows everybody.” He said this in a good way, but added the town has long, cold, dark winters, and was in lockdown because of the coronavirus, and there were no visitors. “I think people felt down,” he said.

There are a couple of drinking establishments and a few small hotels in Husavik, and some of the movie stars visited the hot springs on the mountainside that look out over the sea. “We usually wear bathing suits,” he said.

The town once made its living from fishing but now it relies on tourism and whale watching. It was visited in the 1960s by the Apollo astronauts, who trained for their mission there. Why? “NASA was looking for a place that looked like the moon and they picked us,” Orlygsson said.

Steingrimur Hallgrimsson, 73, a retired truck driver, grew up in Husavik. “I’ve never wanted to live anywhere else,” he said. “This is the navel of the world for me.” He said he hasn’t seen the movie yet, but loves the song, which includes a few lyrics in Icelandic.

Sigurdur Illugason is a longtime player in the town’s theater troupe and did in a scene in the movie, which was cut. But he stars in the promo videos as Oskar Oskarsson, “at the moment the only Oskar in Husavik.”

“I tried to live in Reykjavik for two years,” he told The Washington Post, “but was just homesick and moved back home.”

Kristny Geirsdottir, 20, who works at a hotel and in theater, said living in Husavik is “like a bubble, so it feels kinda weird to go to other places.” She marveled: “Imagine that somewhere in Japan or Poland or somewhere in the world somebody is watching this movie and now they know what Husavik is - it’s a lot of fun.”

Solveig Kristjansdottir is a priest in town. “This song is a blessing,” she said. “Something that has made us proud, even though, to be honest, we haven’t really done anything.”

All the kids in town can sing the song, in Icelandic and English. “We are aware of the humor,” she said.

Outsiders think it’s funny that people in Iceland may still believe in elves. “It’s true. It is our heritage. Now, young people ask, has Grandpa really seen an elf?”

The priest said everyone in town will stay up into the early hours, Iceland time, to see if the song prevails.

“If we don’t win, it won’t break our hearts. How do you say? We have already won,” she said. “It brought the town together during difficult times.”