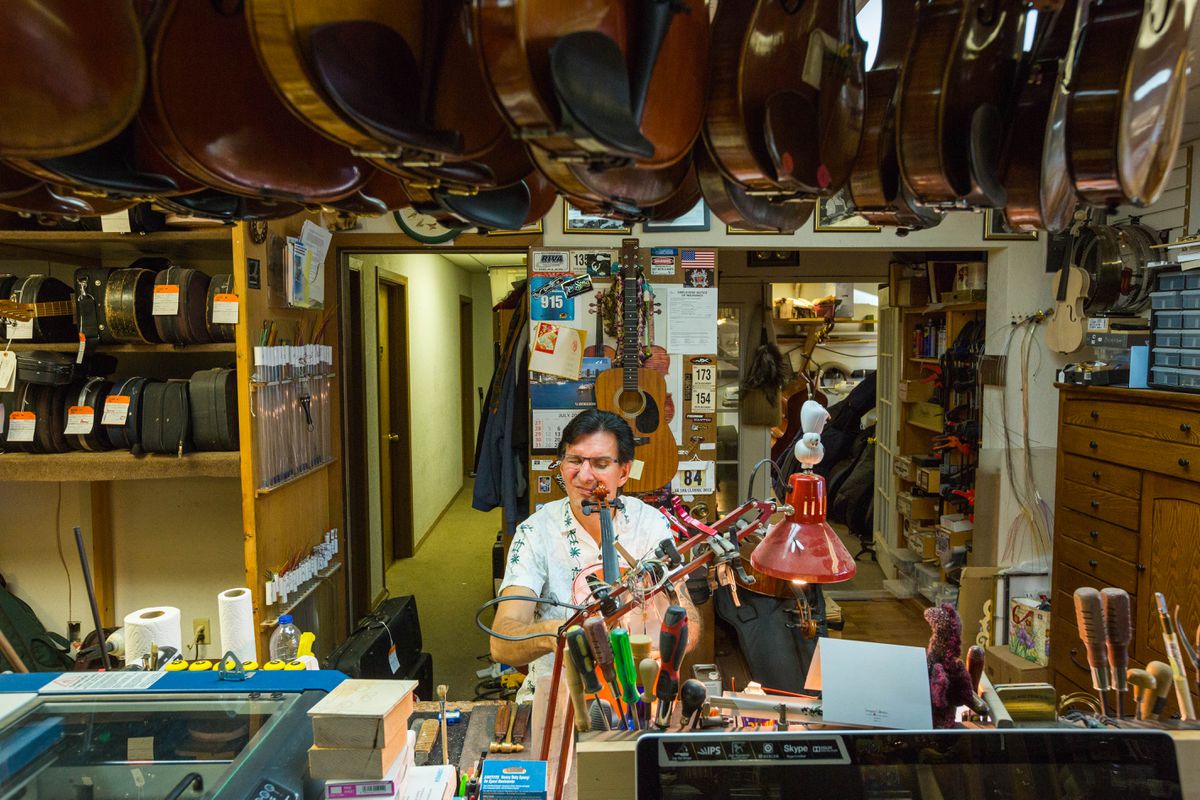 Petr Bucinsky adjusts the bridge of a violin at his violin shop on Tuesday, Aug. 30, 2016. (Loren Holmes / Alaska Dispatch News)

Petr Bucinsky adjusts the bridge of a violin at his violin shop on Tuesday, Aug. 30, 2016. (Loren Holmes / Alaska Dispatch News)

What is likely the oldest man-made object in Alaska still able to fully perform the purpose for which is was built hangs in a shop in Fairview, a meticulous assemblage of dark wood a little more than a foot long and weighing no more than 1 pound, if that.

It's a violin made in Rome by Joannes Dominicus around 1570. That's really old, even by old violin standards. The oldest existing violin in the world predates it by only five or six years.

"Dominicus chose good wood and applied a beautiful brown finish," said Petr Bucinsky, owner of Petr's Violin Shop. "He followed the pattern used by Amati and his instruments have a beautiful tone."

When he bought it in Europe, the violin needed major restoration. Fortunately, it had found the right owner. Bucinsky is a luthier, a builder of instruments, an expert in the mechanics and history of stringed instruments who loves what he does.

The job is visible everywhere you look — hundreds of fiddles, guitars, ukuleles, banjos, etc. line the walls and shelves. Boxes of bridges and pegs sit under the main workbench. Tail hairs from Siberian stallions used to make bows dangle from hooks.

Even before you walk into the shop you know what the main product is. An oversize facsimile of a violin decorated with sunflowers stands on the roof. A connex has portraits of different people playing different instruments. Bucinsky's F250 Super Duty truck with tires suited for mud-bogging is painted with violins. When customers open the door a guitar pick strums the strings of a violin positioned overheard to alert the staff that someone has entered.

The 1570 violin may be the oldest wonder in Petr's Violin Shop, but it's not the only one. Obscure African and Asian instruments are also on display, an Egyptian oud, a Japanese samisen, a Gambian banjo made with lizard skin, lutes, mandolins and a viola d'amore. Violins from China with elegant carvings on their backs. Clear-bodied acrylic electric violins that light up when played.

After tuning up a 1720 violin for a college student late last month, Bucinsky showed off other 18th-century fiddles on hand. They would be considered antiques if they were any object other than violins. A 300-year-old violin can be considered in its prime.

"Look at this! It's like a woman!" Bucinsky said, referring to an exceptionally alluring violin made by Johann Eberll (or Eberle) in 1751 in Prague. The violin was invented, he points out, to imitate the sound of a woman's voice.

To most people, one violin looks pretty much like any other violin. To Bucinsky, each is as individual as a person's face, with subtle — sometimes obvious — differences in shape, color, grain, finish, curves, joins and internal construction. He has a library of books that specify what to look for when trying to determine whether an instrument is English, German, a genuine Stradivarius or a knockoff.

"There are three things you do in this business," he said. "You make violins, restore violins and identify violins."

The overwhelming majority of instruments marked as Stradivari, for instance, are frauds. Sometimes very good frauds.

Among the tools of the trade are a knowledge of how the violin has changed over time. On that subject, Bucinsky is an encyclopedia.

"The interesting thing is the evolution of the instrument," he says.

In its modern form, with four strings and no frets, the violin was invented around 1555 by Andrea Amati of Cremona, Italy. The men who mined cinnabar in the Czech town of Luby neither knew nor cared about the newfangled instrument from the south. But when the Thirty Years War brought mining to halt in the region, hundreds of out-of-work miners began making violins as a way to support themselves. The craft spread through central Europe, to Germany, England and ultimately to Alaska.

Bucinsky was born in Czechoslovakia, leaving for America as a boy shortly before the Soviet Union invaded that country in August, 1968. His family lived in various places around the country until the mid-1970s.

"Then my father heard there was a violin shop for sale in Anchorage, Alaska, and we drove up the highway," he said.

Bucinsky learned the skills from his father, Ivan. Upon graduating from West High School, he enrolled at the Violin Making School of America in Salt Lake City. He still has his "graduation" viola, the instrument he was required to make to matriculate from that institution. He also worked with master luthiers in Europe and with the late Hans Weisshaar in Los Angeles.

Weisshaar is a legend in the world of violin repair; in the 1950s he successfully rescued and rebuilt the 1732 "Red Diamond" Stradivarius after it was recovered from the ocean, waterlogged and shattered. The restored instrument is said to sound better today than it did prior to the accident.

"He was gruff, but fair," Bucinsky said. He recalled how some customers tried to talk him down on the price of a violin. Weisshaar countered by raising the price then, when they agreed to the original price, refusing to sell it.

After studying, Bucinsky returned to Anchorage to take over his father's business. He'd become fond of the Alaska lifestyle, he said. Nowadays, a nice summer afternoon is likely to find him fishing in Prince William Sound or circling Fire Island in his jet-ski.

"I love living in Anchorage," he said.

Such pastimes have a way of sneaking back into the workspace. He discovered that a substance in the interior of Stradivarius violins was residue from sharkskin used to sand the wood. Now he uses the skin of Alaska sand sharks on his own work, but sparingly.

Sanding isn't generally done on the inside of a violin because the dust will clog up the microscopic spaces in the wood, he explained. "Everything has to be carved."

In the room next to the one that holds the violins is the guitar shop. Here, too, one finds rare and one-of-a-kind instruments. There's a 1917 Gibson with an elaborate curl, a reminder of Gibson's beginnings as a maker of harp-guitars. Bucinsky pointed to an acoustic 1947 Epiphone Broadway; a Martin D-45 or two; a ukulele he made from koa wood signed by uke virtuoso Jake Shimabukuro; guitars connected to Chet Atkins, Gordon Lightfoot and other big names; a 1949 Martin made with Brazilian rosewood, an endangered species that can only be imported with special licenses.

Fossilized walrus and mammoth ivory is also used in making guitars and more. When not crafting instruments, Bucinsky uses his tools to make inlaid wood art and cutting boards. He stabilizes and polishes mammoth teeth for creations like bracelets and pistol grips. But his main medium is wood.

"I love wood," he said excitedly as he showed visitors into a big workroom. A large shelf held a virtual log of the rare rosewood. Another box contained driftwood with interesting possibilities, including a chunk off a derelict barge that was washing away when he rescued it from the ocean. Another artifact was wood from a Boeing Stearman open-cockpit biplane.

"Listen to this!" he said as he knocked two pieces together. "It rings like a bell!" Years of vibration has caused the wood to take on a distinct character that he hopes to capture when he turns the scraps into a violin.

"I'm sure that if Stradivarius was working now he'd be using every bit of modern technology he could find," Bucinsky said.

Modern technology is as much an obsession for Bucinsky as traditional violin-making skills. "I'm always trying to take the field a step farther," he said.

To that end he has carbon fiber bows, carbon fiber bridges, ratcheted tuning pegs and his own brand of tuner. He's working on a lighted bow that will switch from red to green when the player is in tune.

Tinkering with improvements is encouraged at the shop. Danny Booth, who works on bass violins, is exploring ways to make a collapsible neck on the tall instrument. Travel is an ongoing headache for bass players. A cello can fit in an airline passenger seat, and many travel on a full-fare first-class ticket. But a bass is too big. A folding neck would make it easier to transport.

The concept is not unheard of; among the guitars in the shop is a Fender with a hinged neck that folds onto the body. It travels in something that looks more like a valise than a typical guitar case. Bucinsky popped the neck into place and gave it a strum. It was decidedly in tune.

Booth first came to Bucinsky's shop as a student in the East High School orchestra.

"Petr put a new neck on the first bass I ever had," he recalled. "When he was done, both of us wondered how I'd ever managed to play the old one."

Booth is among thousands of Anchorage students who have come to the shop over the years. Young performers are sized to match specific instruments, purchase or rent their instruments from Bucinsky and, when something goes wrong, bring their fiddles back to get fixed.

But other patrons are adults. "I get a lot of older people," Bucinsky said. "They tell me, 'I want to take up this instrument again.' If they've played, even for just a year, when they were young, they come back to it pretty easily."

At the end of August the shop had rooms of instruments undergoing repairs in advance of the school year. The connex outside was filled with them. The student business makes it possible for Bucinsky to indulge in more refined pursuits, like acquiring antique instruments.

"I think it's smarter to invest in violins than to invest in money," he said. In fact, the market for rare violins can be quite profitable. The "Lady Blunt" Stradivarius sold for almost $16 million in 2011.

But you have to know what you're doing. And it helps to be able to make repairs, as Bucinsky had to do after he purchased the Dominicus. The top is about 30 percent original, he says. The neck is new. The inside is 70 percent original and the back and sides are the same as Joannes Dominicus produced in his shop in Rome 200 years before the American Revolution.

For all that work, the old violin is approaching its expiration date.

"Violins last 400-450 years," Bucinsky explained. "The wood had oil. Over time the oils crystallize and the violin breaks down. Playing them is self-destructive. Everything is always moving."

Even the glorious Stradivari will someday lose their precious tone.

"They will all wear out," Bucinsky said. "Not right away, but eventually, eventually."