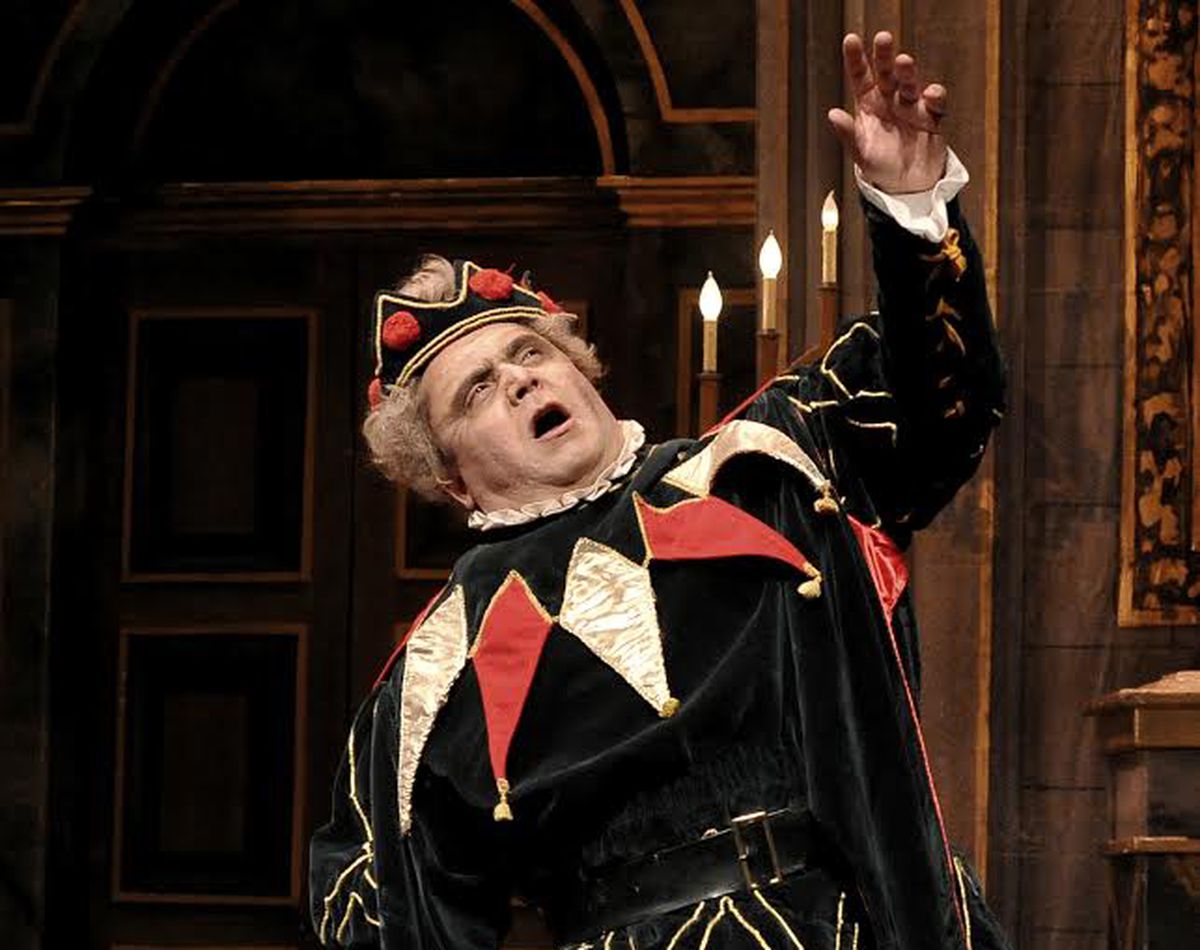 Guido Le Bron in the title role of “Rigoletto” at Tri-Cities Opera, 2014. (Photo by Randy Cummings)

Guido Le Bron in the title role of “Rigoletto” at Tri-Cities Opera, 2014. (Photo by Randy Cummings)

Anchorage Opera opens its season with Verdi's "Rigoletto." The lineup includes Guido LeBron in the title role. LeBron sang the role of the toreador Escamillo in last year's production of "Carmen." The conductor of that show, Brian DeMaris, will be back at the podium for "Rigoletto."

At a meet-and-greet held at Alaska Public Media studios last Sunday I met the two singers cast as the womanizing Duke of Mantua and his victim, Rigoletto's naive daughter Gilda. Peter Scott Drakley and Rachel Policar, both making their first trips to Alaska for this production, are at the dawn of their careers. Policar has performed her role on stage only once before, last year in Ashville, North Carolina, and Drakley is singing his first Duke ever.

Policar, a native of Issaquah, Washington, said she's "mildly less terrified" of the role than she was the first time around. "The experience has allowed me to get that next layer of color choices and emotional reasons in there. Gilda is sung by so many different singers. I've been able to identify areas where I tended to sing with other voices and get a better idea of how to pace myself."

The emotional rollercoaster of the opera also requires some management. "After the first time, I needed 24 hours to recover," Policar said.

The main female role in the opera, Gilda is first seduced by the Duke, then kidnapped by his henchmen to have his way with her. She's sometimes described as a clueless girl, but Policar says that concept is too simple.

"We can't understand today what it would be like to live her life," she said. "She's lived in the dark, not allowed out of the house except with a chaperone. Not even allowed to know her father's name. Then she has this person come into her life who wants to pay attention to her. All she knows is to follow her instincts and emotions. All she wants is to have the love her mother had for her father."

Although this will be Drackley's first Duke, he allowed that he's sung excerpts at plenty of auditions, competitions and concerts. Drackley, who has a certain physical resemblance to the young Pavarotti, talked about "Rigoletto" as a transitional piece. "It's full of this bel canto singing from his early operas, but points to where he went next," the heavy drama of "Simon Boccanegra," "Aida" and ultimately "Otello."

Conductor DeMaris (a native of Lancaster, Pennsylvania, as is Drackley), is also coming to the opera for the first time, sort of. "I've accompanied it on the piano before," he said. But this will be the first time with an orchestra.

"Verdi's orchestration is so transparent," he said. "After the brass at the beginning it feels a lot like Mozart with a lot of rubato."

DeMaris also spoke briefly about the staging. "It's a traditional production," he said, as opposed to some "Rigolettos" set in Las Vegas or in outer space. "But one interesting thing is that the walls move." This accommodates the script, which often has two different things happening simultaneously in two separate places.

Moving sets can sometimes create problems. The onstage ships at the beginning of "The Flying Dutchman" in Atwood Concert Hall some years ago never quite worked as planned. But, Drackley said, an opera singer has to be ready for anything. He recalls a colleague who had to sing her entire part while hanging upside down. "It led to a case of hiccups that wouldn't go away," he said.

"That's the joy of live theater," Policar said. "I was in one show where my co-star split his pants at least once a week. It really affected our choreography."

You can meet the cast of "Rigoletto" onstage at a reception with food and spirits from Alaska Distillery at 6 p.m. Thursday, Oct. 27. Tickets are available at www.anchorageopera.org or by calling 907-279-2557.

The opera will be presented at 8 p.m. Friday and Saturday, Oct. 28-29, and 4 p.m. Sunday, Oct. 30, in the Discovery Theatre. Tickets are available at centertix.net.