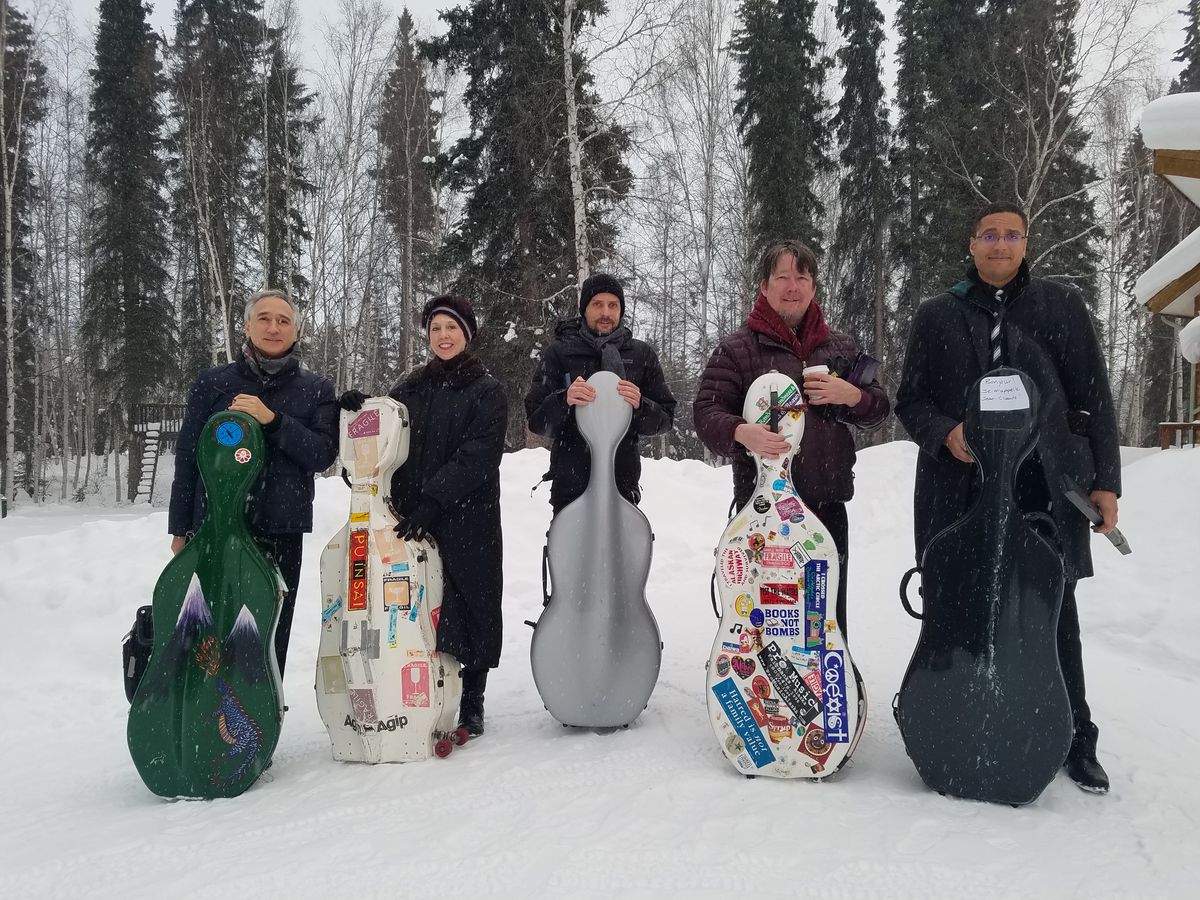 Portland Cello Project is in Alaska with an album based on the season of breakup. From left to right: Gideon Freudmann, Diane Chaplin, Douglas Jenkins, Skip vonKuske and Kevin Jackson. (Courtesy of Robert Stewart-Rogers)

Portland Cello Project is in Alaska with an album based on the season of breakup. From left to right: Gideon Freudmann, Diane Chaplin, Douglas Jenkins, Skip vonKuske and Kevin Jackson. (Courtesy of Robert Stewart-Rogers)

The last time the Portland Cello Project played in Alaska, the musicians became captivated by the season of spring breakup. Artistic Director Doug Jenkins even jokingly promised that the group would create a "breakup" album inspired by the annual procession of melt, muck and revival.

The last time Annalisa Tornfelt returned home to Alaska, she suffered a literal break, fracturing her wrist when she slipped on the ice while walking her family's dogs.

In the year since that fall, Portland Cello Project made good on Jenkins' promise, with Tornfelt serving as its native narrator.

Tornfelt teamed up with the Portland Cello Project's Gideon Freudmann to write the six compositions for the EP, "Spring Breakups: Songs for Alaska," set for release later this month.

In crafting the songs, Tornfelt used impressions from last year's spring break trip to her hometown of Anchorage. It was a trip that left her unable to play her primary instrument, the violin, as she started working with Freudmann on the songs.

"It was an hour after I got off the airplane," she said. "I called my mom to pick me up and we went to the ER. I was standing there letting it cool and thinking about how I could reset it myself. I remember looking over Point Woronzof — everything was shifting and cracking and here I was with my broken wrist. I'd come back home and really needed my family."

The album's opening song — "Fog on a Glacier" — is the musical animation of that slow shifting and awakening.

Local audiences may know Tornfelt best for her time in the Alaska bluegrass band Bearfoot. But in Portland, she has made a name for herself as a solo artist and with Black Prairie, an eclectic band founded by members of The Decemberists.

Freudmann, a founding member of Portland Cello Project, is known for his ability to deftly move from genre to genre as both a cellist and composer.

Both Freudmann and Tornfelt said the collaboration was fertile from a writing perspective and at times almost too prolific.

"We hadn't worked together (before)," Freudmann said. "When we met up to work together, everything fell together. Instead of struggling to find common ground, we were writing too fast and too many for the album and we had to pare down and find the ones that worked best."

During the early stages, Tornfelt was still unable to play her fiddle and was limited to strumming a few guitar chords and singing. But letting Freudmann take the lead on song structure allowed Tornfelt to focus on melody and lyrics.

"It was so easy and fun and exhilarating for me to work with someone where I could just sing and not have to rely on playing an instrument because I couldn't," she said.

"Gideon is an incredible cellist and he has ideas all over the place. He's really creative and can do any style."

Still healing from her injury, Tornfelt would hum melodies in the car or on walks. Tornfelt's propensity for humming led to the soaring vocals of the album's signature song, "Pep and Sway."

"He had that melody already figured out and we put together an arrangement of the song," she said. "We thought it was going to be an instrumental. I listened and was jotting down some lyrics. I was just humming it to myself and he really liked it. That was one we wrote while we were demoing it."

A rare winter snowstorm in Portland allowed for a video to accompany the song that had an Alaska feel, with Freudmann and Tornfelt wandering through the city's white, deserted streets.

"It doesn't snow in Portland very much and this winter was really unusual from that perspective," Freudmann said. "In Anchorage it might not seem too dramatic."

Tornfelt, who is due to deliver a child this month, wasn't able to travel to Anchorage to perform with Portland Cello Project.

But the show will have plenty of surprises.

Vocalist Kat Moore, best known for her work with the Super Saturated Sugar Strings, will stand in with group. And Momentum Dance Collective will give the performance an added visual dynamic. Similarly, Portland Cello Project teamed up with the Alaska Cello Intensive for a show in Fairbanks earlier this week.

"That's really something we've done all along," Freudmann said. "We travel around and work with different folks. This is a particularly fun opportunity to work with dancers."

And while the album plays some on the more conventional breakup songs, the performance focuses on Alaska's unique transition from winter to spring.

"The theme for me is the circle of life," Tornfelt said. "When I think of breaking up, I think of the new that comes from that opening and release. When you think of the ice melting, everything that's underground is being released."