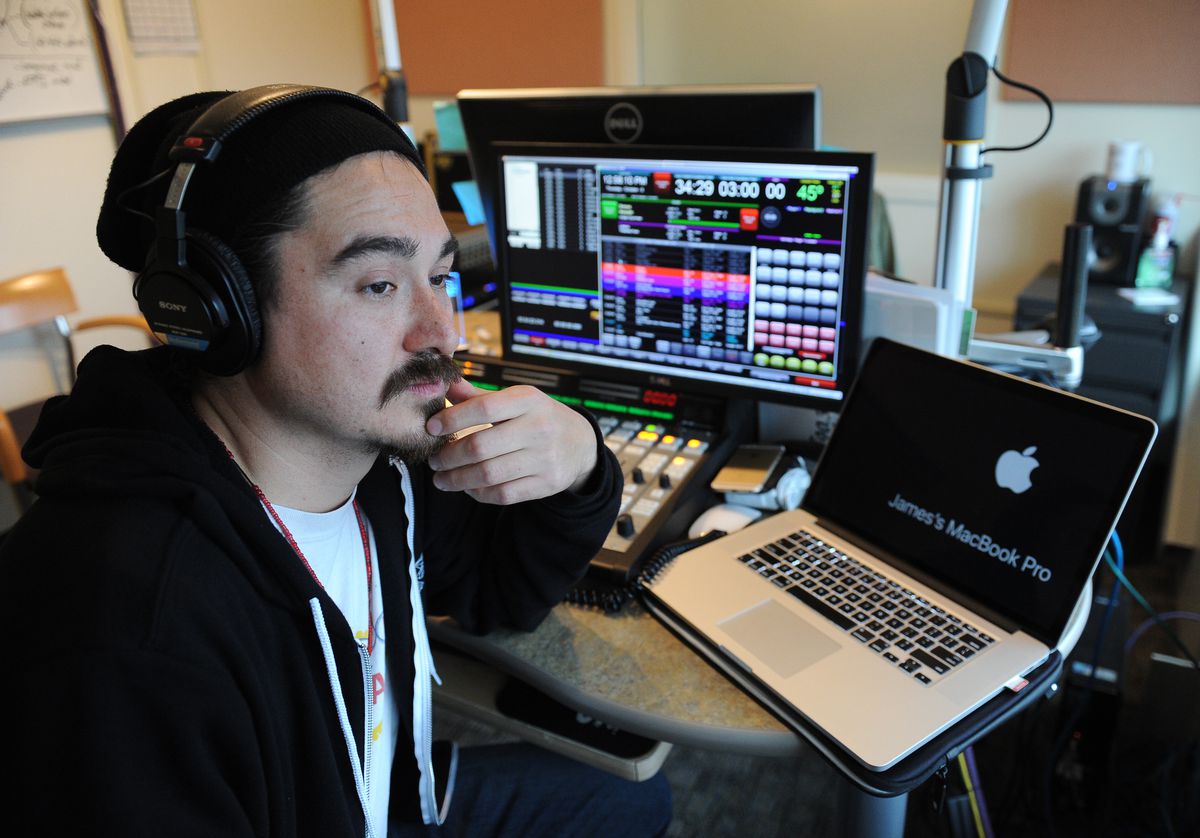 Those are the lyrics to one rap song you would have heard if you were tuned in mid-morning Thursday to the RIVR (therivr.net), a new online radio station launched at the end of September by Anchorage's Koahnic Broadcast Corp.

The RIVR, an acronym for Rising Indigenous Voices Radio, aims to be a go-to source for modern Alaska Native, Native American and First Nations music that otherwise might be tough to find.

That song — in which Native American rapper Red Eagle continues on with a repeating line: "it feel good to be indigenous" — was sandwiched between tracks by Kendrick Lamar and experimental Canadian Inuit vocalist Tanya Tagaq. The station streams 24/7, and work by Native artists is interspersed with mainstream rap, pop and electronic dance music, all with a focus on rhythm.

"So often in the past if we see ourselves on TV or radio, we are mascots. We're the villains. Cowboys and Indians," said James Dommek Jr., a half-Inupiaq local musician and director of the station. "I'm saying, 'We're still here,' and that's important, that we have a station like this for our young Native people."

A few years ago, Alaska Native-operated nonprofit Koahnic started to look for ways to better serve a younger audience. Koahnic's KNBA station mostly serves people over age 35, said Carol Schatz, Koahnic's chief operating officer. A main thrust of the RIVR is to adapt to how millennials listen to music — more with streaming services than FM radios.

The nonprofit commissioned Anchorage research firm the McDowell Group to survey people ages 18 to 35 in Anchorage, Bethel and Juneau about their listening habits and what they wanted to hear. The report, finished in 2015, found demand for streamed programming and interest among both Alaska Natives and non-natives in programming about Native culture.

"There's a lot of listening being done online," Schatz said. "But we also want to provide more than music. And especially to be able to serve Alaska Native and Native American audiences."

"It's important that a station like this exists because it can be listened to in the villages," said Dommek, who is originally from Kotzebue and has lived in Anchorage since 1996.

But finding music to play on the RIVR can involve some digging. Often there's no press for indigenous artists, Dommek said, and it's common to discover a musician who would be a good fit for the station but only has bits and pieces of music scattered here and there across YouTube or SoundCloud.

"It's important to reach out and find those people," said Dommek, who runs the station in a small room at Koahnic with a switchboard and a couple of computers. "A lot of these artists are on reservations or in the villages, or remote places. … They're making this stuff at home. So some of the stuff I'm playing is deeper than underground."

Some of the music can also be challenging to find because of the historical suppression of indigenous culture, Dommek said. Inuit throat singing in Canada, for example, was "banned in the area over 100 years ago by local Christian priests," according to the Smithsonian Institution.

"I think that the people in my generation are becoming more educated and aware," Dommek said, "almost using like this reverse engineering of our culture, working our way back … through the effects of forced assimilation, colonization and being told everything about you was wrong."

Dommek also wants the station to eventually host a variety of podcasts. There's one lined up right now called "Toasted Sister," which will focus on food (interviewing Native chefs, for example, or talking about indigenous food pre-contact). A mobile app is in the works, too.

The station cost about a half-million dollars to develop and launch, Schatz said. The three largest donors were the Rasmuson Foundation, the CIRI Foundation and the Ford Foundation.