12 songs to brush up on before seeing Nas, one of the greatest rappers alive 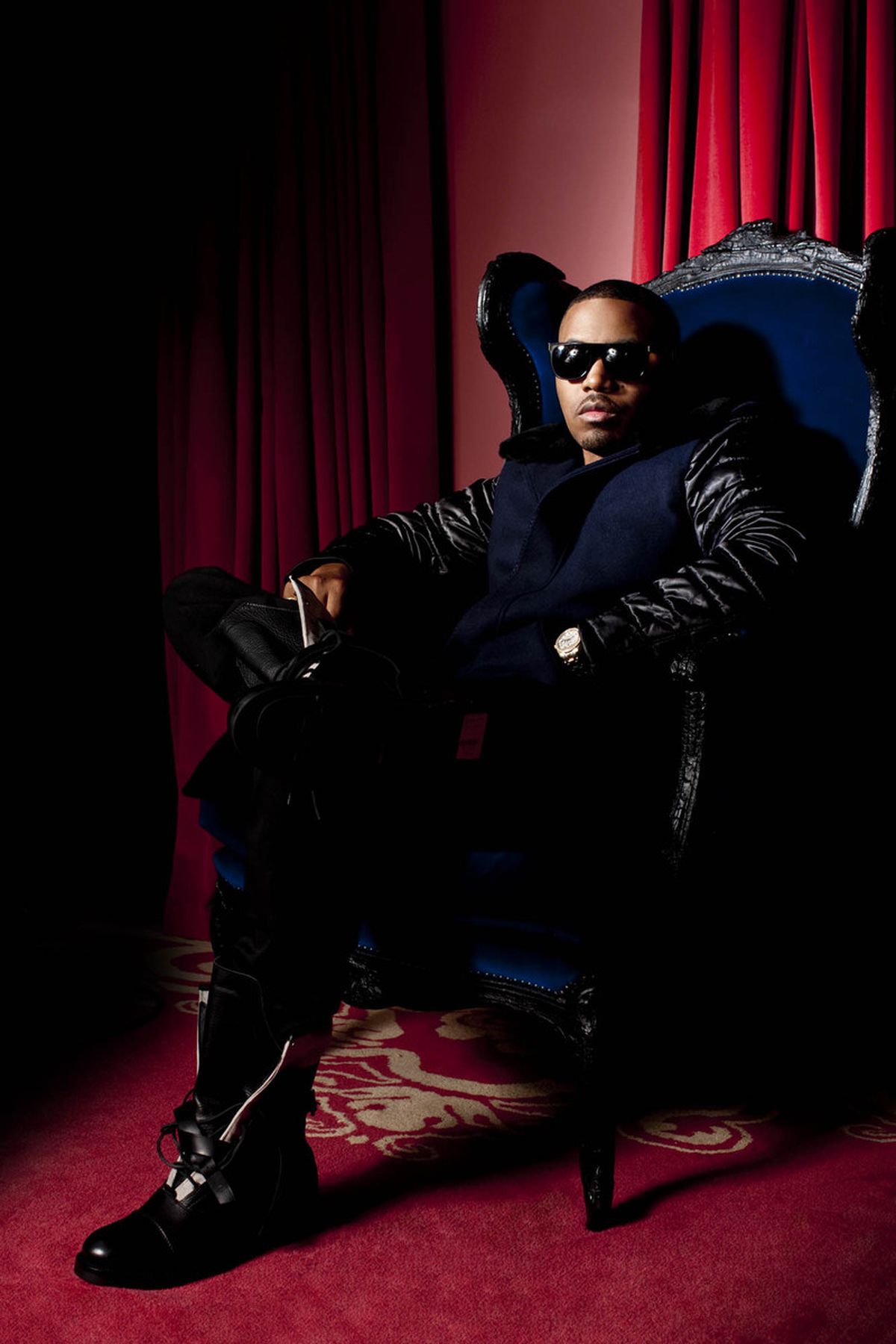 Top five rappers dead or alive? Nasir "Nas" Jones frequently makes that list. Since he debuted on Main Source's song "Live at the Barbecue" in 1991, he's released more than a dozen albums and side projects. Even the most diehard fan would likely concede that his quality of output has been uneven, so if you're catching him this week at the Moose's Tooth and need a refresher or a starting roadmap, here's a list of 12 songs that trace some of the stages in his career.

After several guest verses, Nas' first proper single, "Halftime," arrived in 1992 on the soundtrack of Oliver Stone's "Zebrahead." "Nasty Nas" rode a head-nod-inducing Large Professor beat with a mix of street grit, wordplay and bravado, Two years later the track ended up on his debut album, "Illmatic." It was a natural fit on an LP built on sharp lyricism and tight production. Just under 40 minutes long, "Illmatic" is a lean and mean all-time classic. His live performances pull heavily from its 10 tracks.

Street cred secured by his debut, Nas took aim at the charts on his second album, "It Was Written." Still, even with Lauryn Hill on the hook and a Hype Williams music video, Nas kept it real. You might expect his lines about designer clothes, BMWs and Rolexes on a track called "If I Ruled the World," but Nas also rapped about freeing political prisoners, positive child rearing and electing Coretta Scott King. A crossover success, it charted well and earned him a Grammy nod. You can still hear it on throwback radio shows, and its nearly 70 million plays on Spotify are more than double his next most popular song.

Joining forces with Foxy Brown, AZ and Cormega on the track, "Affirmative Action," Nas laid the groundwork for his next project. "The Firm," was envisioned as a supergroup, but the effort came off overly contrived in many places. It probably didn't help that Cormega was replaced by Nature and the whole thing was named after a John Grisham novel. "Phone Tap," a static-distorted, surveillance-inspired track produced by Dr. Dre, is still worth a listen.

After The Firm's lukewarm reception, Nas reunited with longtime collaborator DJ Premier to lead off his third album. A hip-hop mad scientist, Premier built "Nas is Like" with his signature crisp drums and an obscure sample from a Lutheran minister. The beat sounds like an updated Illmatic track and Nas had the lyrics to match, "Street scriptures for lost souls in the crossroads / to the corner thugs hustling for cars that cost dough / to the big dogs living large taking it light."

Nas pivoted from Premier to Puff Daddy with his next single, "Hate Me Now." The accompanying video features jealous detractors called out with expletives and over-the-top Cristal consumption. In other words, just another '90s TRL staple, until you add Nas and Puff reenacting a crucifixion. Nas said the scenes were a response to backlash over a play with a black Jesus. "I wanted to be crucified like Jesus in the video, to get back at all those people that don't want to see a black man doing his thing."

Nas had a rivalry with fellow New Yorker Jay-Z that came to a head in 2001 with a pair of high-profile diss records. Over a Doors-sampling Kanye West beat, Jay struck first with "Takeover." Nas responded with a firehose stream of insults on "Ether" and was hailed the victor. A decade-and-a-half after it appeared on his fifth album, "Stillmatic," the song's title is now a verb to describe someone getting completely disrespected, e.g. "they got ethered." Jay and Nas later squashed their beef and even appeared together on each other's albums. Listen to "Black Republicans" and "Success" to hear the two trade bars, not barbs.

Not just a fixture in the rap universe, Nas is also known for his high-profile marriage with R&B singer, Kelis. He was a short-order cook in her "Milkshake" video and they appeared together on songs like "Hey Nas" on his sixth album, "God's Son." Things didn't end well, though. She filed for divorce in '09 while pregnant with their son. Just two months ago she revealed new details of their relationship, telling a Hollywood Unlocked reporter, "There was a lot of drinking. There was a lot of physical and mental abuse." Outside of some emojis on an Instagram post, Nas has not responded to the interview.

"Boys and girls, listen up / You can be anything in the world, in God we trust / An architect, doctor, maybe an actress / But nothing comes easy it takes much practice," Nas raps on "I Can." Only part inspirational message, the track also has dark, cautionary tales. With riffs from Beethoven's "Fur Elise" and a call-and-response hook sung by a child, it climbed to 12 on Billboard's Hot 100, Nas' highest ranking as a solo artist.

The Incredible Bongo Band's "Apache" is a breakdance staple and was the backbone to an earlier Nas song, "Made You Look." Producer Salaam Remi went back to the well for "Thief's Theme," using a pitched-down sample of the group's cover of Iron Butterfly's "In-A-Gadda-Da-Vida." The ominous sound is a perfect backdrop for Nas' raps: "Philosophical gangsta with violent priors / going back like black and white TVs with pliers / leaning on broke down cars with flat tires."

Back when Kanye was better known for his production than his raps (or his antics), Nas used one of his beats for "Poppa was a Playa," the last track on "Lost Tapes," a grab bag of tracks that finally got an official release in 2002. They both trade verses on "We Major," off Kanye's sophomore release "Late Registration," and "Still Dreaming," on Nas' '05 album "Hip Hop Is Dead." This April, Kanye tweeted that he "hand produced" a new Nas album that would be releasing June 15.

While Damian and Stephen Marley's channel their dad Bob's reggae vibes in their music, the backbone is often the boom bap of hip-hop drums. The smash on Damian's "Welcome to Jamrock" album was the single of the same name, but tucked away near the end of the LP is a collaboration with Nas, "Road to Zion." Over an eerie sample, Nas raps about the ills of the world. "Sometimes I can't help but feel helpless / I'm having daymares in daytime / wide awake try to relate." The connection between Nas and Damian sparked a full-length project focused on their shared African roots, 2010's "Distant Relatives."

Remi was back behind the boards for "The Don." This time he flipped a sample of "Dance Inna New York." Super Cat's dancehall vocals are layered and looped over booming drums while Nas' raps are slick and rapid fire. It's got an energy that could soundtrack pregame warmups at a blacktop basketball tournament and bass that makes it perfect for a slow cruise with the windows down. The track appears on 2012's "Good Life," Nas' last full-length album and his only release since his divorce with Kelis.

Where: Moose's Tooth Pub and Pizzeria

How much: $60. For more information, go to beartooththeatre.net.

Spencer Shroyer is an Alaska DJ and promoter who performs as DJ Spencer Lee.

Spencer Shroyer is an Alaska DJ and promoter who performs as DJ Spencer Lee.