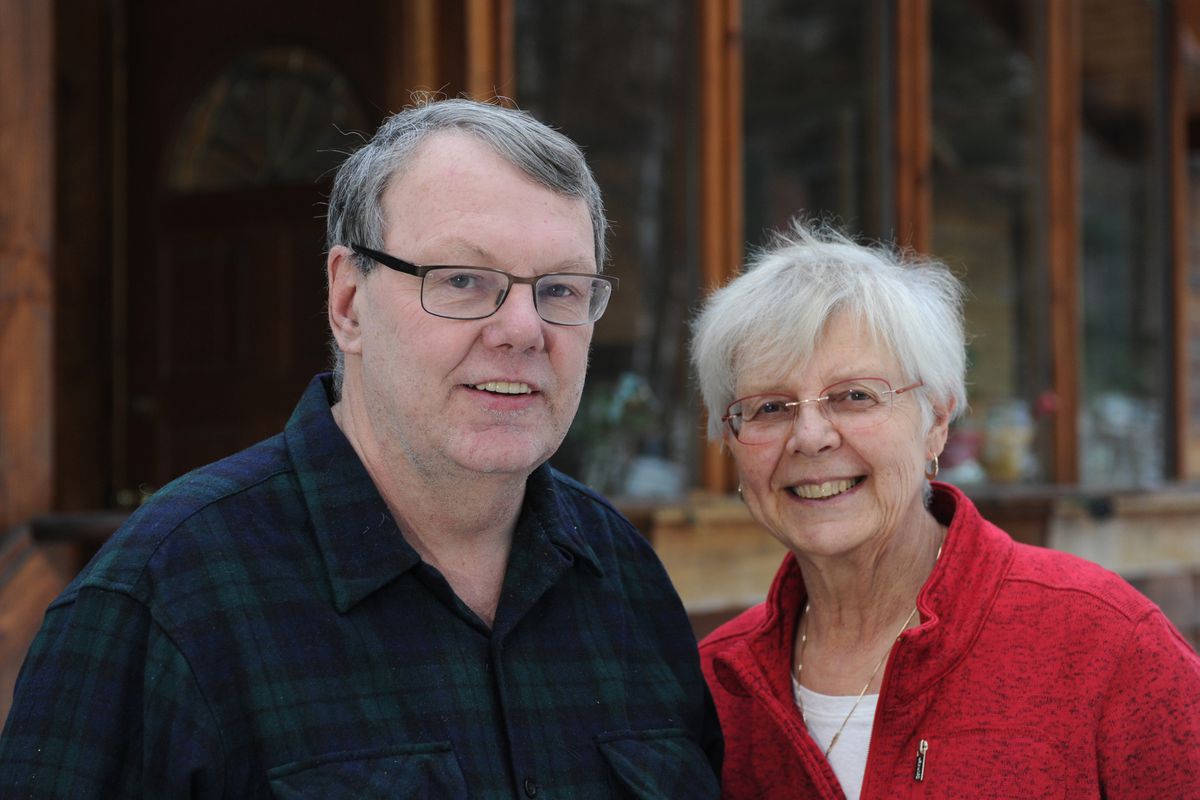 Mike McCormick and Katy Spangler of Eagle River have been promoting concerts in Alaska for 32 years and the past 25 years as Whistling Swan Productions. Sunday, Jan. 27, 2019. (Bill Roth / ADN)

Mike McCormick and Katy Spangler of Eagle River have been promoting concerts in Alaska for 32 years and the past 25 years as Whistling Swan Productions. Sunday, Jan. 27, 2019. (Bill Roth / ADN)

“The best artists are the ones we are passionate about and want to share,” co-founder Mike McCormick said. “Sometimes we even pick artists that we believe in, knowing that even if we sell the show out, we aren’t going to make money. It’s about presenting the art.”

It all started in 1987, when McCormick and his wife, Katy Spangler, hired American folk musician Bill Staines to perform at the 13th annual Alaska Folk Festival fundraiser in Juneau. A few years later in 1990, the couple organized another fundraiser with Staines and other musicians.

By 1994, they had launched their first official show as Whistling Swan Productions, a performance by folk artist Kristina Olsen with local group The Moms as the opener for about a hundred people at the Wilda Marston Theatre in the Loussac Library.

Now, Whistling Swan has booked hundreds of artists in venues across Southcentral Alaska. McCormick and Spangler have brought up iconic musicians such as Arlo Guthrie, Mavis Staples, Ani DiFranco and Judy Collins, who performs at the Discovery Theatre on March 28.

McCormick said the goal is to both bring in performers from outside Alaska and also showcase local talent.

“We really love to bring up people who have bits of musical history. When you hear those artists and get to talk to them, you’re touching history,” McCormick said. “It’s great for me personally to connect to that history, but also greater to help people in Anchorage touch it and hear it.”

The name itself comes with a bit of history. Whistling Swan Productions was inspired by the couple’s love of bird watching, their Irish heritage and its “musical connotations,” according to McCormick.

Whistling Swan Productions aims to make just enough money to keep the shows going. It hasn’t been the couple’s main job either. McCormick worked in the Anchorage School District for 26 years teaching grades four through six. He also worked at the University of Alaska Anchorage, retiring in 2015 after 10 years in student affairs and directing an Anchorage environmental program. Spangler has worked in the University of Alaska Southeast teacher training program for nearly 38 years.

“This has never been our profession, we’re both lifetime educators. It’s just something we do before or after work. It’s a passion,” McCormick said.

McCormick and Spangler offer hospitality and transportation to the artists they promote, which often results in lasting personal connections with the performers.

“If we stop doing Whistling Swan or (the artist) stops touring, we’d still be friends with them,” McCormick said. “Several artists contacted us after the earthquake to see if we were alright. It just makes you feel great.”

Peter Mulvey, a singer-songwriter from Wisconsin, first performed in Alaska with Whistling Swan in the late ‘90s. He has performed over 60 shows in the state since, most recently in October of 2018.

“It’s no surprise that they have been able to thrive this long. (McCormick) is one of the best promoters I know. If everybody was as good at promoting as he is, then I would have a better career,” Mulvey said with a laugh.

Over the years, McCormick watched technology advance, which has affected how Whistling Swan does business.

“When we first started, if I wanted to make an offer to an artist, I had to type it out and mail it and do phone calls,” McCormick said. “That’s all changed now. It’s one of the biggest challenges that everybody gets their information in a different way. It’s really hard to reach people.”

However, McCormick also sees this change as an opportunity for more musicians to emerge in Alaska.

“There’s so much more going on here now than there ever was. There’s much better talent locally, there’s way more reason to go out and get local music and there’s more national music coming,” he said.

For McCormick, running Whistling Swan is a “labor of love” - it’s about making things happen in the community.

“It’s more than just entertainment,” he said. “I feel that music can really move lives. It becomes a part of who you are.”

Whistling Swan Productions’ next show will feature traditional and contemporary folk artist Judy Collins. The performance takes place on March 28 at 7 p.m. in the Discovery Theatre. Tickets are available on centertix.com.