These musical instruments are tough enough for travel in rural Alaska 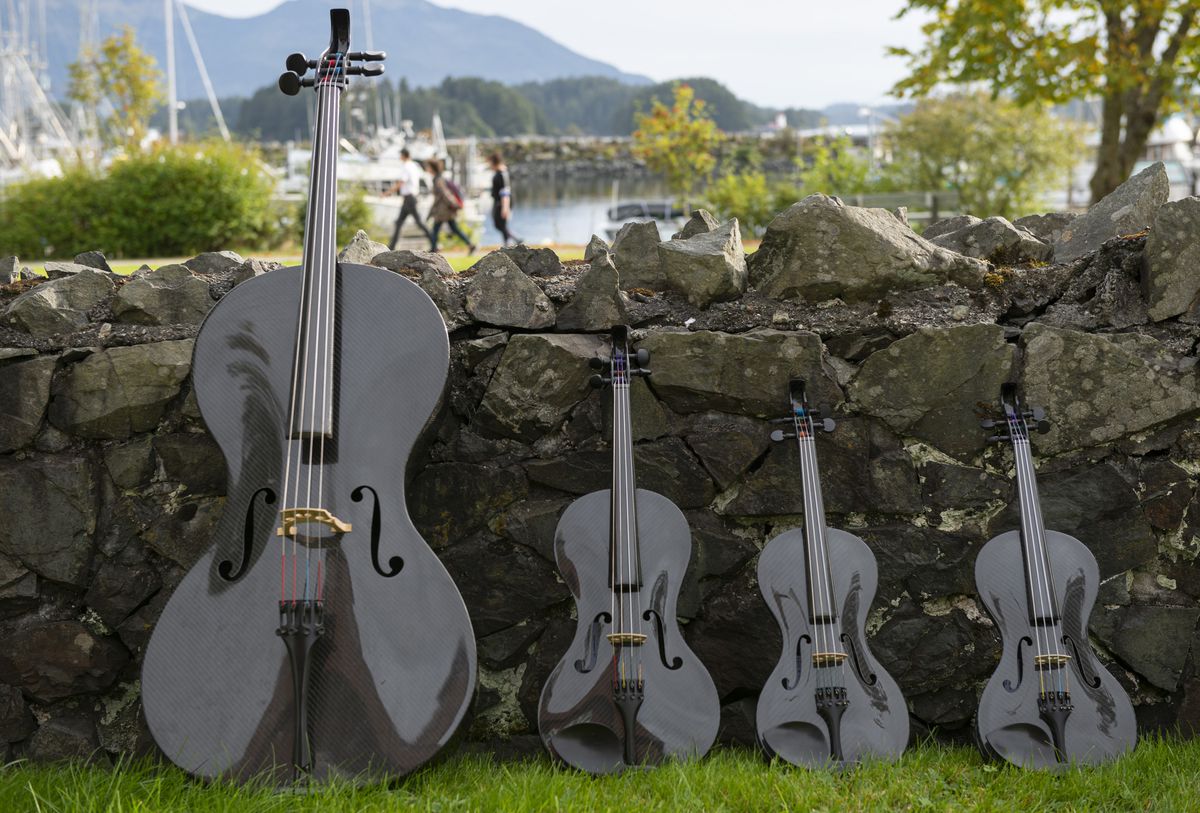 Zuill Bailey had just touched down in White Mountain in Western Alaska and began loading his gear into a trailer pulled by a dogsled.

Bailey, a cellist and the artistic director of the Sitka Music Festival, knew his fingers would feel the sting of the cold as the sled pulled away from the airstrip.

But his instrument would be fine.

Bailey was using a carbon fiber cello that is both incredibly sturdy and resistant to extreme weather. The instrument helped solve a major issue that had dogged the festival as it dispatched world-class chamber musicians to remote locations in Alaska. Using carbon fiber models seemed like a perfect solution.

So the Sitka Music Festival decided to buy some of their own. The classical quartet set -- viola, cello and two violins -- cost $20,000 and was purchased in spring 2018 through fundraisers and with the help of matching funds from donors.

“Basically our mission is to bring the world’s greatest musicians and instruction to the state, throughout the entire year,” Bailey said. “The conditions sometimes hold us back.

“The musicians we are bringing up are some of the world’s finest with some of the finest instruments. We need to ensure many things, that we have no boundaries and that those instruments aren’t damaged.”

Traveling with expensive instruments can also be cost-prohibitive. Generally the festival (and often an individual performer) buys an extra seat on a plane for a cello. And regardless of cost of transport, many of the instruments are delicate and irreplaceable. Bailey’s main instrument, a Goffriller cello, is 326 years old.

And in Alaska, where the festival travels to at least three communities a year, transportation options can often be unpredictable and rides can be bumpy. It’s not unusual to travel in pickups, snowmachines, small boats and even dog sleds, executive director Kayla Boettcher said. Extreme cold and sometimes high humidity or aridity are other factors that can easily damage wooden instruments.

“It’s this precious item that you don’t want to expose to crazy weather or alternative modes of transportation or other things,” Boettcher said.

Boettcher said the carbon fiber instruments are professional quality. But more important, they allow the guest musicians to interact with the audience without fear of damage.

“The (musicians) appreciate them,” Boettcher said. Carbon fiber instruments are "a good quality for the fact that it’s not wood. They appreciate the resonance and the members of the quartet had fun playing around with the different types of tones they could get with this instrument. They’re high-quality instruments.

"When it’s a question of being able to feel more at ease either in a remote area or sharing the music up close and personal with other people it’s great, that trumps everything.”

Bailey is protective of his Goffriller cello and understandably so. He has mentioned in interviews that he won’t play outside or expose it to long doses of sunlight. But with the carbon fiber instruments, Bailey can take it literally anywhere and get audiences intimately involved and interested.

The instruments are sleek, black and eye-catching. They are a curiosity to crowds, according to Bailey, “because they think they look like Batman’s car.”

“We are caretakers of these historic instruments,” he said. “We have these crazy cases and buy seats for them on the airplane and keep our distance from the audience. (The carbon fiber instrument) not only looks like a modern piece of art, you can touch it and have a person put their hands on the cello. Over the years, people have asked to play my cello and of course I couldn’t let them.

Using the carbon fiber cello, "you can see the smile when they are sitting there in the driver’s seat.”

Last winter, members of New York City’s Attacca Quartet were among the first guest musicians who got to put the instruments to the test in remote Alaska.

“We did take them on tour in February to the North Slope," Boettcher said. The Attacca Quartet "went to Nuiqsut and the Alpine oil fields and took these instruments. Some of the transportation was in a pickup truck and they just threw them in back. They even took the instruments out and tried to play them outside.”

The instruments are also light. Boettcher said the closest comparison as far as the composition of the instruments is to a Kevlar kayak. They are light enough that Bailey said he even climbed Mount Edgecumbe to perform with a carbon fiber instrument.

Whether used individually or in groups, the instruments “have created a borderless festival where we can make an impact and not have all the distractions,” Bailey said.

While the instruments won’t be on display for the music festival’s annual fall concert in Anchorage, the high quality of musicianship will be.

The first weekend will feature Alfredo Oyágüez, Bailey and the Vega Quartet. Oyágüez, a pianist, “likes to feature Spanish composers that might not be as well known as German and Austrian composers,” Boettcher said.

The second weekend of the concert series includes performances by pianists Natasha Paremski and Eduard Zilberkant on all four Rachmaninoff piano concertos over two nights.

“You really are in awe of the different sounds and genres and personalities (over the course of the series),” Bailey said. “I try to program what I’d like to hear, what I’d like to go see with my friends and what I think people would like to talk about after.”