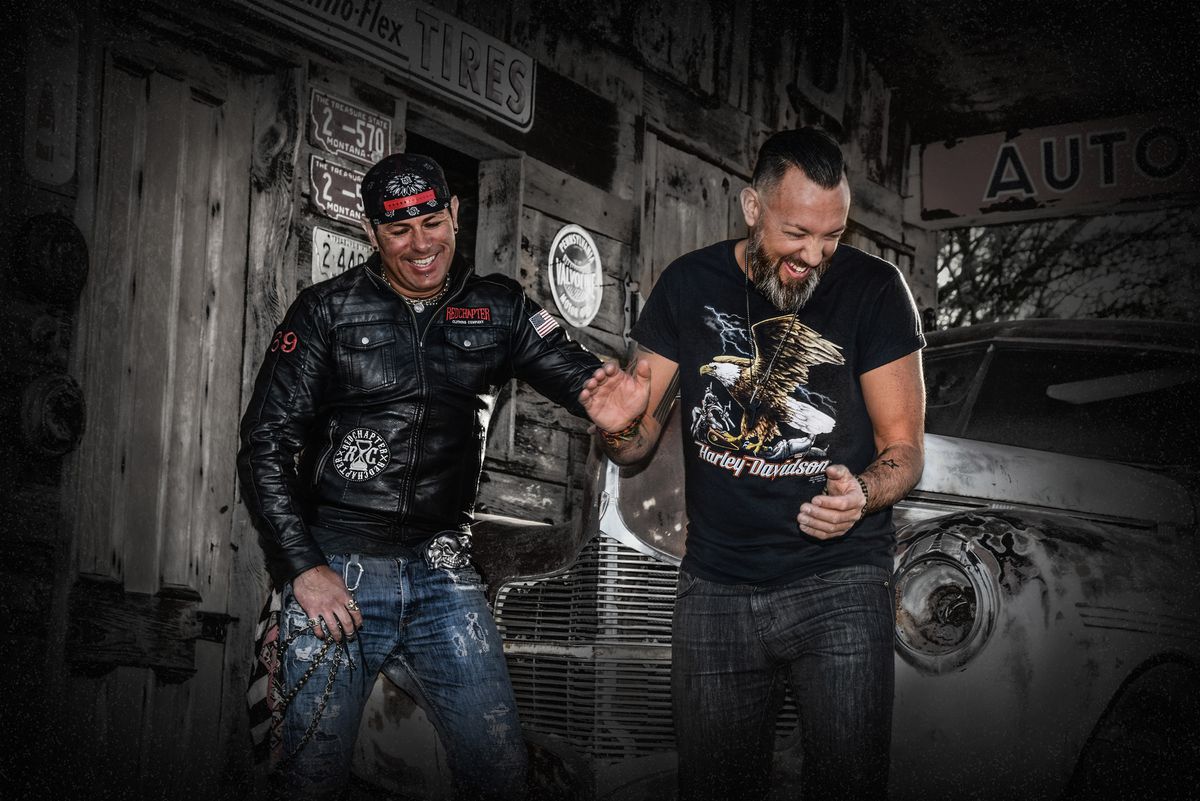 Around 3 a.m. on a late night in 2008, Ben Carey was sitting alone in the legendary Mel’s Drive-In on the Sunset Strip in West Hollywood and waiting for a fellow Aussie he’d just met.

That’s when Bryan Hopkins walked in with Toryn Green, the former lead singer of Fuel.

Carey was not impressed.

“It looked like Halloween and it definitely wasn’t Halloween as far as I knew,” Carey said. “And they’re fully LA rock-starred out, you know, they have the makeup and the hair and the colors and the jackets and the pants and the tassels and I was like, ‘Oh my god, it’s rock pirates.’”

“This procession was headed to my table,” Carey said. “I was fully in judge-a-book-by-its-cover mode and all the stupid things were going through my mind making fun of these guys like, ‘what clowns.’”

Hopkins pulled up the chair directly across from Carey and stuck his hand out.

“Of course you are,” Carey said to himself. “It’s a very American name. I’m in L.A. and you look like this. What the hell?”

Then they started talking and Carey realized he’d gotten Hopkins all wrong.

“It becomes pretty evident and very quickly that this guy sitting across from me was super cool,” Carey said. “He was really nice, and I was such a douche.”

Little did either of them know the meeting was the start of a friendship that would lead to the formation of Elvis Monroe and a special relationship with Alaska, beginning when the duo led an ensemble group for a series of shows at Southcentral high schools as part of the anti-drug and alcohol program in 2011.

Since then the duo has been a favorite at the annual Backyard Country BBQ and Northern Lights Country Series — they wrote their radio hit “Backyard Family Barbeque” in an Anchorage hotel room — and now Elvis Monroe is bringing a full band back to Anchorage for the first time in eight years at Koot’s on Nov. 15.

The show will be a reunion for Carey and Hopkins with the two members of Elvis Monroe who traveled to Alaska in 2011: Ryan MacMillan, the drummer for Matchbox 20, and Daniel Spriewald, a bass player with Phil X and the Drills.

Also joining them is violinist Rahmann Phillip, who first played with them two years ago and has since gone on to join Lady Gaga’s residency show in Las Vegas, where Elvis Monroe is based.

“We are very much the same,” Hopkins said of Carey. “We think the same and he’s truly my best friend. He says ‘no’ to guys like Brett Young and Joe Nichols and all these great friends of ours who constantly want him to go out on tour and play guitar for them. If he does that, then we don’t do what we’re doing because this is a 50-50 deal. And he doesn’t do those things so that we can do all this together.

Although they grew up across the Pacific Ocean from each other in Australia and Oregon, Carey and Hopkins led parallel lives.

Both were star athletes in high school and neither have drank or used drugs.

Hopkins drew the attention of scouts from the Los Angeles Angels and the Cincinnati Reds before his baseball career ended due to a hyperextended elbow, sending him from odd jobs in Ketchikan to acting jobs in Hollywood that included the “Video Yearbook” episode of “Saved by the Bell” when he played leather-clad bad boy Vince Montana.

He left his side gigs behind as his group Paperback Hero gained a loyal following along the West Coast and a residency at L.A.’s famous Panther Club before he met Carey.

But just as Carey was warming up to Hopkins, it was the Paperback Hero singer who started to judge.

‘I don’t really play around here’

Hopkins was immediately skeptical when Carey said he played guitar and offered to help him with a song.

Little did Hopkins know Carey was the lead guitarist for multi-platinum selling band Lifehouse (“Hanging by a Moment").

Hopkins asked where he played around town, but Carey held back.

“I don’t really play around town,” Carey told him. “I didn’t want to be the douche and the clown that says, ‘Yeah, I play the Staples Center, bro.’”

Hopkins got more suspicious the more evasive Carey was and started to think Carey was trying to “ride my coattails.” He tried to change the subject and then Carey asked him who his favorite bands were.

“No,” Carey said. “I’m not. I really don’t play around here. The last time I played here was the Staples Center and the Greek Theater.”

After Carey played a show with Paperback Hero and they got together in the studio to write, he was walking his dog and called Hopkins to tell him he wanted to form a band.

Then Carey got a call from Matt Nelson, the son of Ricky Nelson who along with his twin brother Gunnar formed the rock group Nelson in the late 1980s.

Matt wanted to do a side project with Carey, but Carey told him it was too late.

He still wanted to be involved, but Carey had a playful question first.

“If you want to be in the band, what do you bring?” Carey asked.

Nelson was ready with a combination of the biggest icons of American culture who used to hang out with his famous father.

Hopkins’ and Carey’s lives would never be the same after the Route 91 Harvest Festival in Las Vegas on Oct. 1, 2017.

They’d played the event since it began in 2014, the year that Carey officially left Lifehouse. After performing in 2017 they decided to watch country star and headliner Jason Aldean’s show from the crowd rather than their backstage vantage points.

Just 20 minutes into the set, a shooter began spraying bullets into the crowd from the window of a high-rise hotel. People started falling around Carey and Hopkins, and everyone in the crowd of more than 20,000 began to run.

Hopkins and Carey were quickly separated. Carey was briefly trampled in the rush before getting to his feet and racing in a zig-zag pattern toward the fences.

In front of Hopkins was Nicole Ruffino. They’d met the day before and shared a selfie, and now they were just feet apart again.

Hopkins grabbed her hand and led a group to a refrigerated catering truck backstage as bullets ricocheted in every direction.

When it was all over, 59 people were dead, more than 800 were wounded and everyone was changed forever.

After the mass shooting, Elvis Monroe hit the road playing benefit concerts for victims in Nevada, California and on Oct. 16, 2017, in Anchorage at Williwaw for the families of Alaska victims Adrian Murfitt and Dorene Anderson.

Outside the venue looking in, Carey saw a picture of Murfitt scroll over the screen and realized he’d met him that night and even grabbed his black cowboy hat.

“I felt the finality of the realization of, I was just talking to that kid. I was just giving him a hug. I was messing around putting on his hat and he was standing right behind us literally,” Carey said. “It just all hit me at once.”

Months later after countless interviews and benefits, Carey took charge of his healing after a charity show.

“I sat there after the event and I said to Bryan, ‘I can’t do this anymore. I can’t live in the past. I want to look forward not backward,’” he recalled. “For me personally, (looking back) was just disrespectful for the fact that we were given life. So that was the day for me where I said, ‘Come on. I’m moving forward.’ ”

Hopkins and Ruffino, the woman he’d met escaping the shooting, were able to heal together, sharing their grief and writing poetry for each other in the weeks after.

Still together more than two years later, both have dealt with the anxiety and triggers from that night. Their story was featured in media and shows like “Pickler and Ben” as Hopkins talked his way through the healing process.

The Las Vegas shooting will always be a part of Elvis Monroe’s story, not for the least of reasons that it inspired Hopkins to finish a song he and Carey had shelved titled “The Fight.”

Regulars at the Red Rock in Vegas, Carey and Hopkins became friends with owner and philanthropist Bryan Lindsey, who is a former chairman of the American Heart Association.

Hopkins was touched after meeting some young children facing life-threatening heart conditions. His own brother, Cody, has been battling a terminal heart diagnosis and the pair appeared together on stage Nov. 2 to perform the song they recorded together titled “Forever Family.”

Hopkins even shaved his trademark mohawk in solidarity with Cody, who has long sported a shaved head.

Carey and Hopkins had planned to write a song for the AHA but it never came together despite their good intentions.

Then Route 91 happened. After a few whirlwind days and sleepless nights, Hopkins came to Carey and said he was ready to rewrite it.

Lindsey, an organizer of the Las Vegas Strong benefit, didn’t hesitate to give his blessing when they asked about using the song as a tribute to the victims and the survivors.

“‘The Fight’ is about that struggle. It’s not about October 1. It’s about being human and helping the person next to you, standing up and fighting for them because they can’t.”

Correction: This story has been updated to correct the spelling of Ryan MacMillan’s last name.