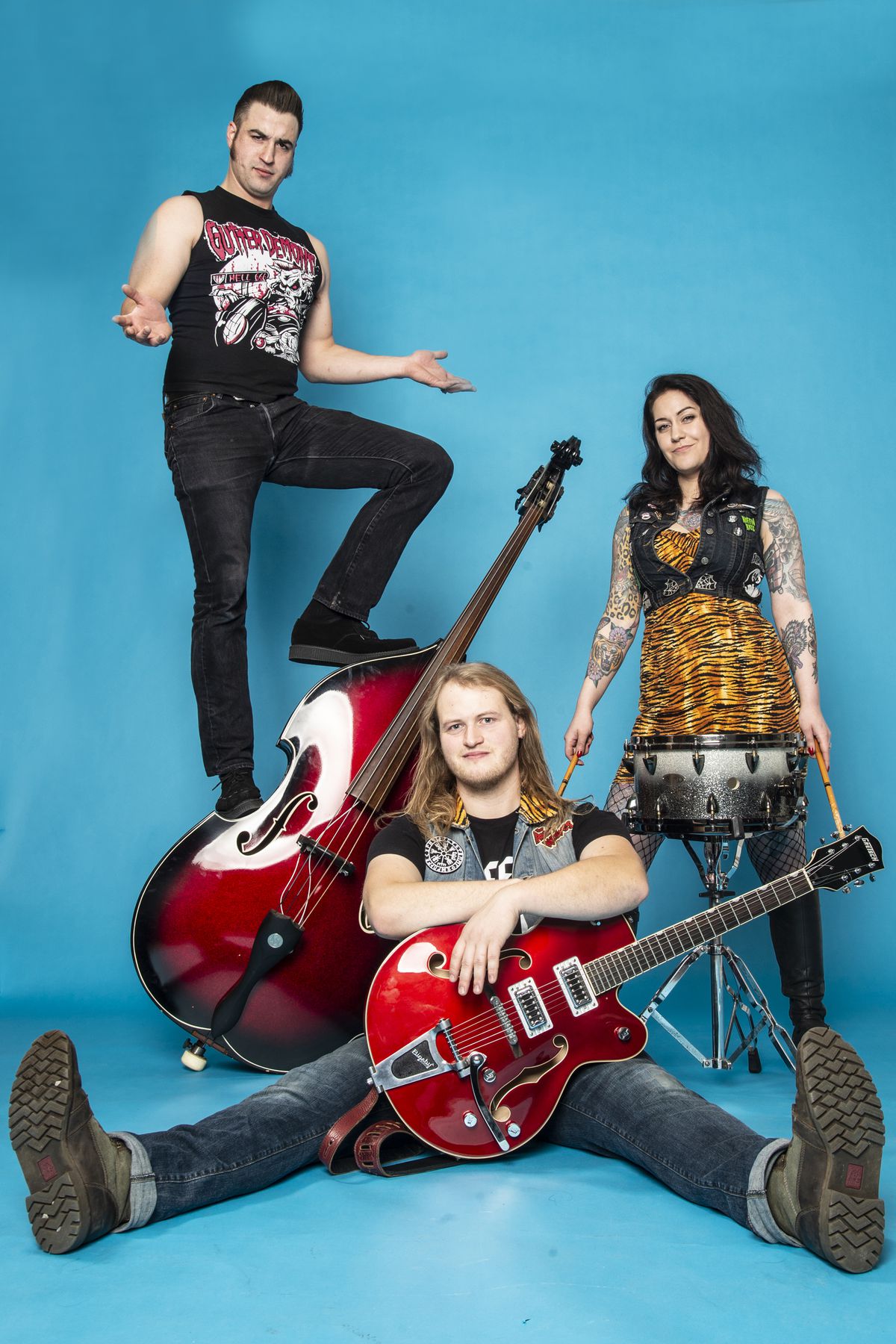 A crisp $5 bill at the door opened a curtain on a world that is equal parts nostalgia and an assault to the senses. Punctuated by stripteases from local burlesque performer Bunnicula Blanc, the bar was a frenzy as Fairbanks-based psychobilly rockers The Avery Wolves took the stage.

Peppered with harrowing musical stunts, The Avery Wolves’ live shows are as much a visual spectacle as a musical one. It’s not uncommon that you’ll see singer-bassist Nathan Harris deftly turn the standup bass on its side, allowing him to slap it with the heel of his boot. Former metal guitarist Jeremy Larson will precariously balance on the backend of the bass, playing his guitar one-handed and sipping a beer, before leaping into the mosh pit.

“[Psychobilly] is obviously influenced by horror, but we’re not trying to be that gothy, scary band. There is a lot of camp that goes into it because you know, there are only so many serious songs you can write about werewolves,” says Harris, the band’s founder.

Infused with campiness, The Avery Wolves’ history also has a dose of the macabre. When Harris and Jason Dahlke left their hardcore band to form The Avery Wolves in 2010, they made the Fairbanks funeral home where Harris both worked and lived their practice space.

"It made for a great location because it was quiet and sterile," jokes Harris.

The solitude proved to be the perfect place to launch, as both Harris and Dahlke attempted to learn a new style of music — and new instruments.

Both had been guitarists, “but neither of us wanted to play guitar anymore,” Harris says. “Initially, we tried to find a bass player but couldn’t so I went out and bought a standup bass so I could learn how to play it and Jason [Dahlke] decided to play drums.”

The only drum kit they could afford was a free one salvaged from the junkyard and supplemented with cheap add-ons from friends.

“We pretty much had to practice with a kick drum, a snare and some $20 cymbals we found,” says Harris.

Undeterred by the duct tape holding their instruments together, Harris and Dahlk prepared for their first gig — a battle of the bands with the opportunity to open for nationally touring act Everclear awaiting the winner.

To Harris’ surprise, they won (Everclear, however, ended up canceling).

A few months after that, the band was invited to compete in another battle of the bands in Fort Wainwright — this time with a $3,000 prize on the line. The Avery Wolves won again.

Finally armed with functioning equipment, The Avery Wolves began work on their first EP, “Wreckin’ with the Wolves” in 2011. An ode to the band’s quirky beginnings — and empty wallets — their first EP was recorded and produced entirely in the basement of the mortuary the band called home.

For the next five years, The Avery Wolves continued to hone their sound while playing gigs around the state. But in 2015, a series of misfortunes — including the departure of Dahlke — threatened to end the band.

“When Jason [Dahlke] decided to relocate to Texas, I knew they were going to break up if they didn’t get a drummer,” says Avery Wolves’ current drummer, Barbie Keller.

A self-proclaimed “Avery Wolves’ fangirl” with aspirations to be on stage, Keller was married to the band’s guitarist. Although she had kicked around as a bassist for a Fairbanks punk band, Keller hadn’t had much experience behind a drum set.

“When I told Nathan [Harris] I wanted to be their drummer, he was kind of over the band because he was sick of teaching members how to play their instruments. Even my husband didn’t think I could do it, but I told him there was no way I was going to quit,” says Keller.

With Keller on drums, the band slowly began working on their first full-length album "Call of the Wolf.” Then Keller and her husband decided to divorce.

“I just remember thinking, ‘great, we just got the band back together and now my drummer and guitarist are getting divorced,” says Harris.

Then, shortly after the divorce papers were finalized, Keller’s ex-husband suffered a stroke and could no longer play.

For Harris, it seemed like the final nail in the band’s coffin.

“I mean, you can only annually and creatively reanimate Frankenstein’s monster so many times,” says Harris.

But though she was only three months into her tenure as The Avery Wolves’ drummer, Keller refused to allow the band to fade into oblivion. Over the course of a weekend, the band recorded the bass, guitar, and drum parts at Surreal Studios in Anchorage before returning to Fairbanks.

Three years later and armed with seasoned metal guitarist Jeremy Larson, the band is still rocking out and recording for “Call of the Wolf" has finally concluded.

With fingers crossed, Keller says the tentative release date for the album is early 2020.

But for now, the only way to enjoy The Avery Wolves’ music is also the best — live.

The Avery Wolves will make the journey down from Fairbanks on Friday, Dec. 13, for a performance at Van’s Dive Bar (1027 E. Fifth Ave.) with Anchorage bands Saucy Yoda, Hoss and Icky Nikki. The show begins at 9 p.m. and is free to attend.