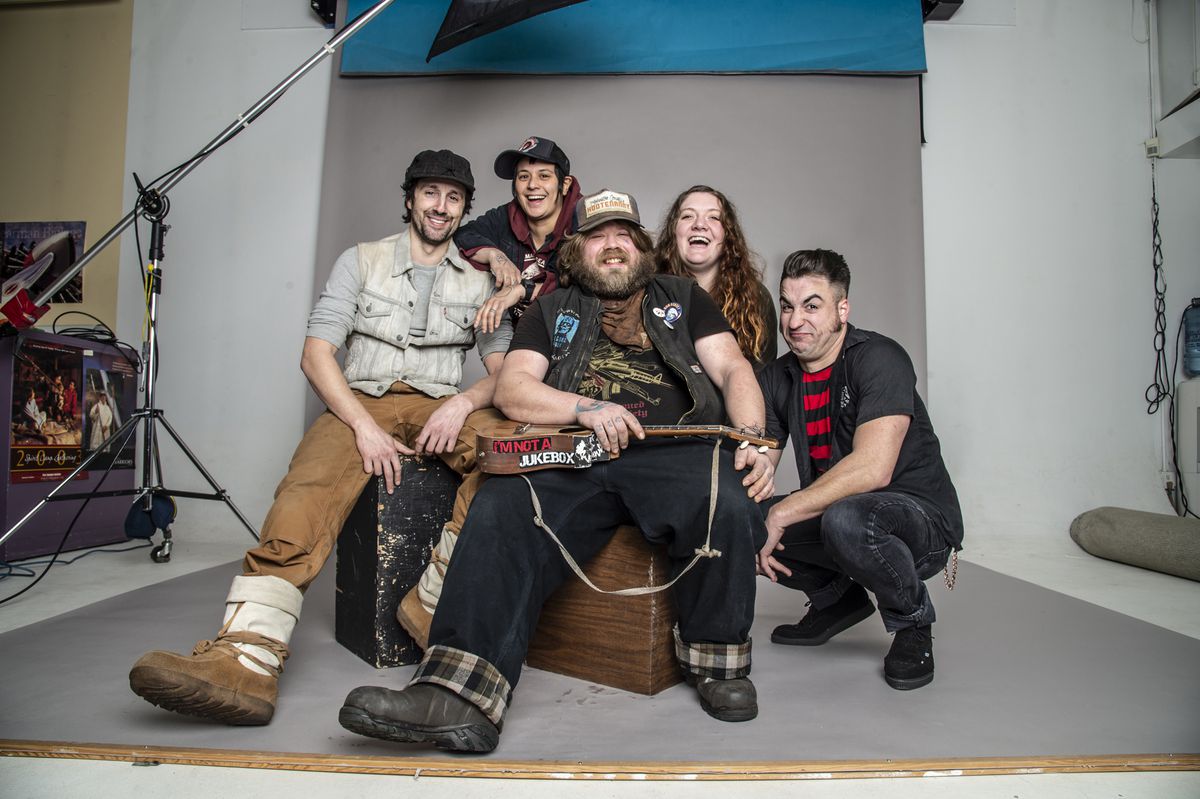 It’s been a long road for the Shoot Dangs to get their music into recorded form. The Alaska band will release its debut album, “Drunk as Folk,” this week after about a half-dozen years playing in the state.

In 2019, the band tried for much of the year to complete a recording session that started in Fairbanks under the haze of a few too many beverages.

And of course there was an initial attempt to record in 2014 that never developed into a full album -- you could call it the “Maytag Tapes.”

“Technically it’s our first professionally recorded album,” said banjo player Timmy Johnson. “We recorded in a laundry room in Midtown Anchorage (in 2014). It was in the backside of a duplex. The guy recording us was doing his laundry.”

Fast-forward six years, and the guy from the laundry room, local musician Matt Brenna, now has a studio in Anchorage where he recorded the Shoot Dangs earlier this year.

“We went in there and knocked it out over a day,” Johnson said.

The group formed in 2013 with a slightly different lineup but a similar sound to what’s on display in the album, with galloping banjo and frenzied, punk-style ukulele.

When it came to naming the band, the Shoot Dangs won out over a number of other exclamations like the Gosh Darns and the Gee Whizzes.

“We played our first few shows as The Gutter Sheiks (Johnny Lungs’ old band)," Johnson said. “After that, our old tap-dancer (Josie Wallace) and I were sitting on her back porch one night with a couple of beers and a half-torn piece of notebook paper randomly blurting out nonsense and writing down all kinds of names ... the list was probably 50 names long. The Shoot Dangs made it onto that list, and it was the one that called to us. The rest of the crew gave the thumbs up on the name and the rest was history.”

The band’s sound has evolved over the years with both changing members and instrumentation. At one point, the band featured a pair of banjos, but that’s been whittled down to one. Johnson said especially the addition of Moraes’ accordion and Corral on steel guitar gives the sound an added dimension. But throughout, Johnson said the band has considered its music “bluecrass,” a mixture of punk and bluegrass.

“We’re trying to go for the most full sound we can," Johnson said.

As much as the style of their music, the Shoot Dangs are known for their onstage antics, generally a high-intensity, foot-stomping performance with some tomfoolery mixed in.

“We’re kind of goofy,” Johnson said. “We’re just like messing around and have a playful stage presence. At least it gets that way as the night goes on. It’s fun to make the audience feel like it’s part of it. We’re all in it together, I suppose.”

With the exception of “Long Black Veil,” made famous by Lefty Frizzell and later, Johnny Cash, the album is all original songs written by the group.

“We’re excited to get some new material out,” Johnson said. “People have been asking about it for a while.”