Will the show go on? For professional musicians working in the midst of pandemic, the stakes have never been higher. 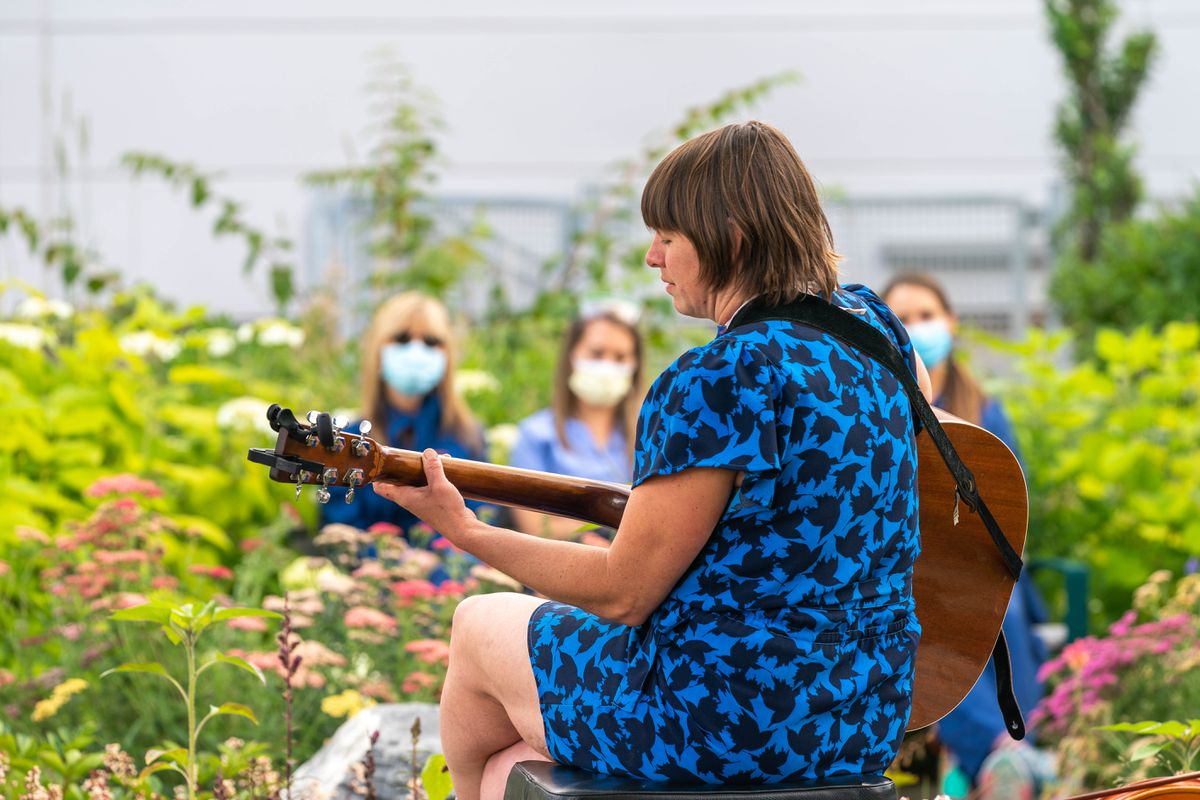 Kat Moore performs as her solo act The Forest That Never Sleeps for the Cardiac and Pulmonary Rehabilitation team in the healing garden at Providence Alaska Medical Center on Wednesday, Aug. 12, 2020. The pop-up concert was facilitated by the Anchorage Concert Association, which has partnered with Moore on five of the events, which they are tentatively calling "Play it Forward.". (Loren Holmes / ADN)

Kat Moore performs as her solo act The Forest That Never Sleeps for the Cardiac and Pulmonary Rehabilitation team in the healing garden at Providence Alaska Medical Center on Wednesday, Aug. 12, 2020. The pop-up concert was facilitated by the Anchorage Concert Association, which has partnered with Moore on five of the events, which they are tentatively calling "Play it Forward.". (Loren Holmes / ADN)

As Anchorage-based musician Kat Moore drove to Palmer in early June for an outdoor performance, her anxiety climbed.

Moore, like many musicians, hadn’t performed since bars and restaurants closed in March due to the COVID-19 pandemic.

The number of new cases had remained low for weeks statewide. She’d carefully considered the venue’s precautions — the show was outdoors, masks were advised and she and her band, the Lateral Lines, were not advertising the performance in order to keep down the guest count.

That show went on. Still, Moore knew it’d be her last for some time.

“I was feeling really weird about like whether or not it was okay to be doing this, and when I got there I realized that no matter how much the venues can do their best to take care, when you’re eating and drinking there can’t be facial coverings all the time. And with the addition of alcohol ... things get relaxed,” she said.

“So for me, I just realized that if I couldn’t create a safe venue space for the most vulnerable person there, then I didn’t think I could do shows anymore.”

It was one of the most difficult decisions of her life, she said.

Michael Howard, a local musician and the president of Alaska Independent Musicians Initiative, said those are the tough issues most of the music community has been grappling with amid the pandemic. AKIMI is a nonprofit organization that connects Alaska musicians with opportunities to perform and collaborate.

Professional musicians want to perform and need to make money. But if a large group shows up, there’s the potential of an outbreak sparking, especially if people neglect to keep their masks on or social distance.

“Musicians are concerned that by getting out and performing they’re basically saying to the public ‘this is a safe place for you to be’ and encouraging people to come out to a show.”

Mayor Ethan Berkowitz closed all indoor Anchorage venues in early August for four weeks to curb the spread of the virus, but outdoor gatherings and performances have continued, and venues in other portions of the state remain open.

Many musicians in Alaska work other jobs as well, some of which have also been impacted by the pandemic, and the abrupt loss of income from performing is taking a toll on the entire music community, Howard said.

Moore said as soon as venues closed, she and other musicians turned to the internet. It was challenging to learn how to make performances sound good online and look interesting, even when they’re made at home in isolation.

It’s a different way to connect with people, but it’s more important now than ever to use music to unite the community and bring joy and comfort to those on the other side of the screen, Moore said.

Juneau-based singer/songwriter Marian Call said she’s been lucky to have a supportive online fan base. She’s used the time away from performing to finish producing her latest album, “SWEARS!”, which was released late last month. Call said she obtained CARE funding to help recover from the loss of income.

“I would recommend that other musicians look into processes like that because they might feel like, even if it’s a part-time gig, they might feel like ‘I’m not eligible for any help for my business,’ but if you have a business license and you’ve been treating your music like a business, there is some help available,” Call said.

All three musicians said people wants to make the right decision, but that can mean something different for each performer or band.

“I have been on calls with bands who are trying to decide and saying, ‘Look, I don’t know if I can make my rent, I really need to play this gig and the venue wants me to play a gig. I’m asking this for my safety, but there’s gonna be people drinking alcohol there, so I don’t know whether that’s enforceable or what I can do if they break it,’ ” Call said.

“It’s also up to the venues to keep people safe, but unfortunately the venues are desperate too. And they feel like they need to get as many people in as they can. That’s dangerous. It’s a bad situation for everyone.”

Things might look different after the pandemic. Call said she worries about the number of music venues that will close permanently due to the economic hit of the pandemic.

But music brings people together, Call said, and there is always going to be a need for community — especially during trying times.

[‘I can’t afford to shut the doors again': Anchorage restaurants and bars face another round of COVID-19 restrictions]

“Money in it or not, nobody can stop the arts from happening,” Call said. “People are gonna find a way to make it work (after the pandemic). No one can stop bands from getting together in a garage band or some kids clicking around with drum machines or some old folks get together in a bar and playing old-timey music. No one’s going to be able to stop that.”

Support from fans is what will help individual musicians survive the pandemic, Call said, whether that means a financial donation, tuning in to a live online show or sharing a song on social media.