40 years after his Manhattan murder, John Lennon lives on as a quintessential New Yorker 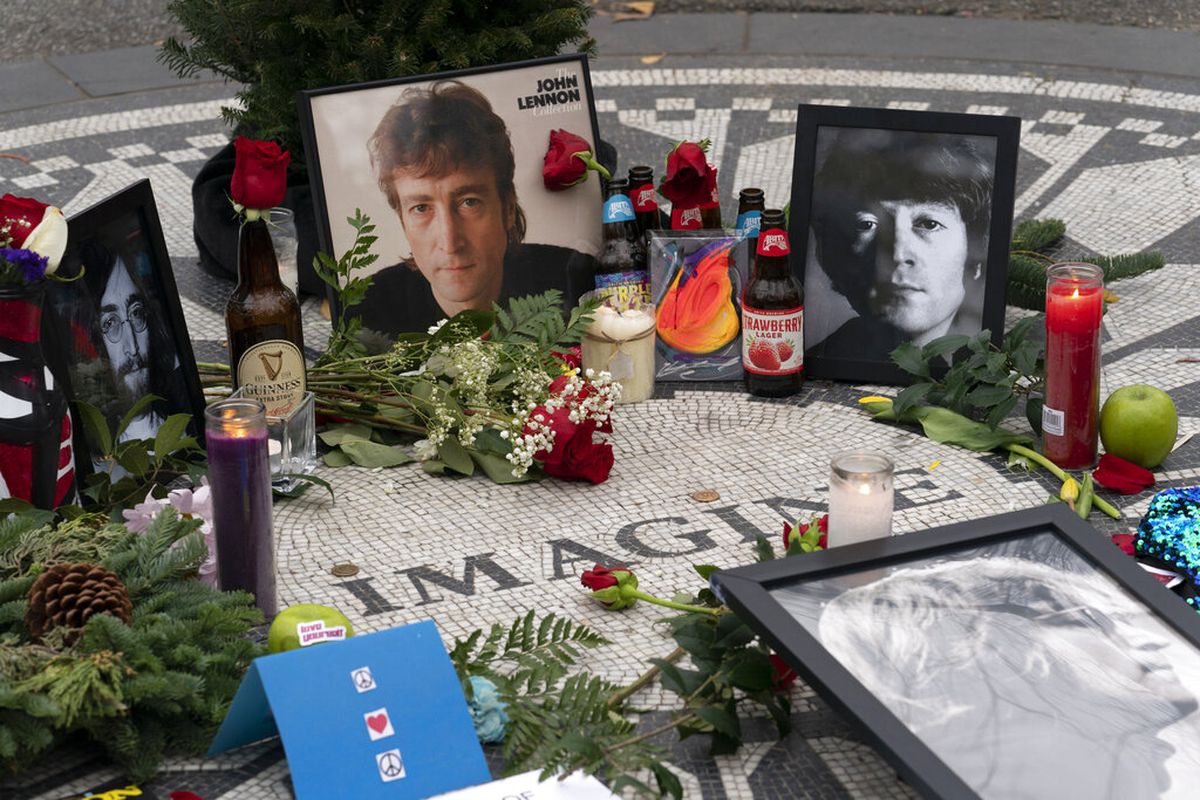 Photos, flowers, and candles have been left at Strawberry Fields in New York's Central Park to remember John Lennon, Tuesday, Dec. 8, 2020. The rock star and former Beatle was shot to death outside his New York City apartment building by a fan on Dec. 8, 1980. (AP Photo/Mark Lennihan)

Photos, flowers, and candles have been left at Strawberry Fields in New York's Central Park to remember John Lennon, Tuesday, Dec. 8, 2020. The rock star and former Beatle was shot to death outside his New York City apartment building by a fan on Dec. 8, 1980. (AP Photo/Mark Lennihan)

NEW YORK -- John Lennon sat chatting and spinning his favorite records with a DJ from his favorite Manhattan radio station, an ex-Beatle comfortable at last in his own skin and his recently adopted home: New York City.

“One of me biggest kicks is just going out to eat or going to the movies, you know?” said Lennon during his two-hour visit with WNEW-FM host Dennis Elsas on Sept. 28, 1974. “And doing things I couldn’t do when I was in the middle of the Beatles stuff. I really get off on that.”

In his last decade of life, the man who wrote “Imagine” accomplished the unimaginable: The worldwide rock star became just another guy on the Upper West Side, finding a cozy existence amid his fellow New Yorkers. He started his days at a favorite coffee shop, strolled freely through Central Park, chatted up the locals and shopped for clothes at the Charivari 72 boutique.

And Lennon, liberated from his oppressive Fab Four past in the midst of America’s most densely populated city, relished every minute.

“He liked all the things that the people who live here like,” recalled friend and photographer Bob Gruen, who shot his last Lennon photos just two days before a crazed Beatles fan killed the revered rocker. “John and Yoko felt a real freedom in New York to be who they were, to ride bicycles through Greenwich Village.

“People allowed him to be a lot freer in New York.”

The Liverpool native became a fixture on the streets surrounding his W. 72nd St. apartment in the Dakota. He visited the since-shuttered Cafe La Fortuna most mornings, sipping coffee and doodling on his newspaper without intrusion.

“People didn’t bother him,” remembered NYPD officer Tony Palma, who often saw Lennon on out and about in the years before responding to the Dakota when the rock star was killed on Dec. 8, 1980. “He felt comfortable in New York.”

And New York felt comfortable with the ex-mop top turned solo artist, house-husband and father. The Rock and Roll Hall of Famer, while British by birth, became a New Yorker by choice.

“You know, I should have been born in New York, man,” Lennon proclaimed in a 1971 interview with Rolling Stone magazine. “That’s where I belong!”

Lennon, who would have turned 80 on Oct. 9, has now been dead as long as he lived. But he endures in the memories of those who encountered the songwriting genius in and around his beloved last stop.

Elsas, a note of disbelief still in his voice, remembers the rainy Saturday afternoon when Lennon — toting four of his favorite 45s — followed up on an invite to pop in for an interview. Elsas recalls that Lennon took a taxi to the station’s Fifth Ave. offices, and casually rode up with two friends in the elevator.

“Inside I’m screaming, ‘It’s John Lennon!’” recalled Elsas, still DJing today on WFUV-FM and Sirius Radio. “I think he came because he liked doing radio. It was not so blatant as ‘I’ll go on and play my new record (’Walls and Bridges’). He was so charming, so disarming.”

Elsas made time to ask about Lennon’s ongoing battle with the Nixon Administration and U.S. immigration authorities to remain in his New York City home.

“I love it, you know, and that’s why I’m fighting to stay here,” explained Lennon. “Maybe they could just ban me from Ohio or something, you know? Nothing against Ohio!”

Lennon dodged deportation and won the right to stay in 1975 — the same year his son Sean was born and Lennon left the public stage until his 1980 return with the chart-topping “Double Fantasy.”

A 1974 Gruen photo of Lennon flashing a peace sign with the Statue of Liberty as his backdrop remains among the most iconic photos of the brilliant songsmith.

Lennon found his comfort zone quickly after landing in a Greenwich Village sublet apartment in 1971. Nervous photographer Brian Hamill recalls arriving for a photo shoot expecting a phalanx of hair and makeup people, publicists and assorted rock and roll hangers-on.

Lennon answered the buzzer himself.

“He was like a regular guy from the neighborhood,” recalled Hamill, bestowing the highest praise any Brooklyn guy could offer. “I asked if he was up for taking a walk about the neighborhood, I wanted to see how he behaved around other people.

“So we walked around Greenwich Village with Yoko. So nice to other people. John listened to every question! And humorous. Always very funny.”

Hamill recently released “Dream Lovers: John and Yoko in NYC,” featuring previously unseen photos of the couple taken in the Village and later Lennon by himself at the Dakota.

Lennon was mortally wounded outside his home four decades ago this Tuesday by a gunman who just hours earlier implored his idol to sign a copy of the new Lennon/Ono “Double Fantasy” album.

Ono still keeps their apartment in the Dakota, but she “chooses to focus on Oct. 9 rather than Dec. 8th,” said her spokesman Elliot Mintz — referencing Lennon’s birthday, rather than the day of his death. As usual, she will not do any interviews or make public appearances associated with the grim anniversary.

Lennon, like any good New Yorker, could give as good as he got. Gruen recalled the musician walking past a basketball court near the Dakota when one of the players shouted for his attention.