Anchorage’s first classical music concert was a century ago. Watch a reenactment Sunday. 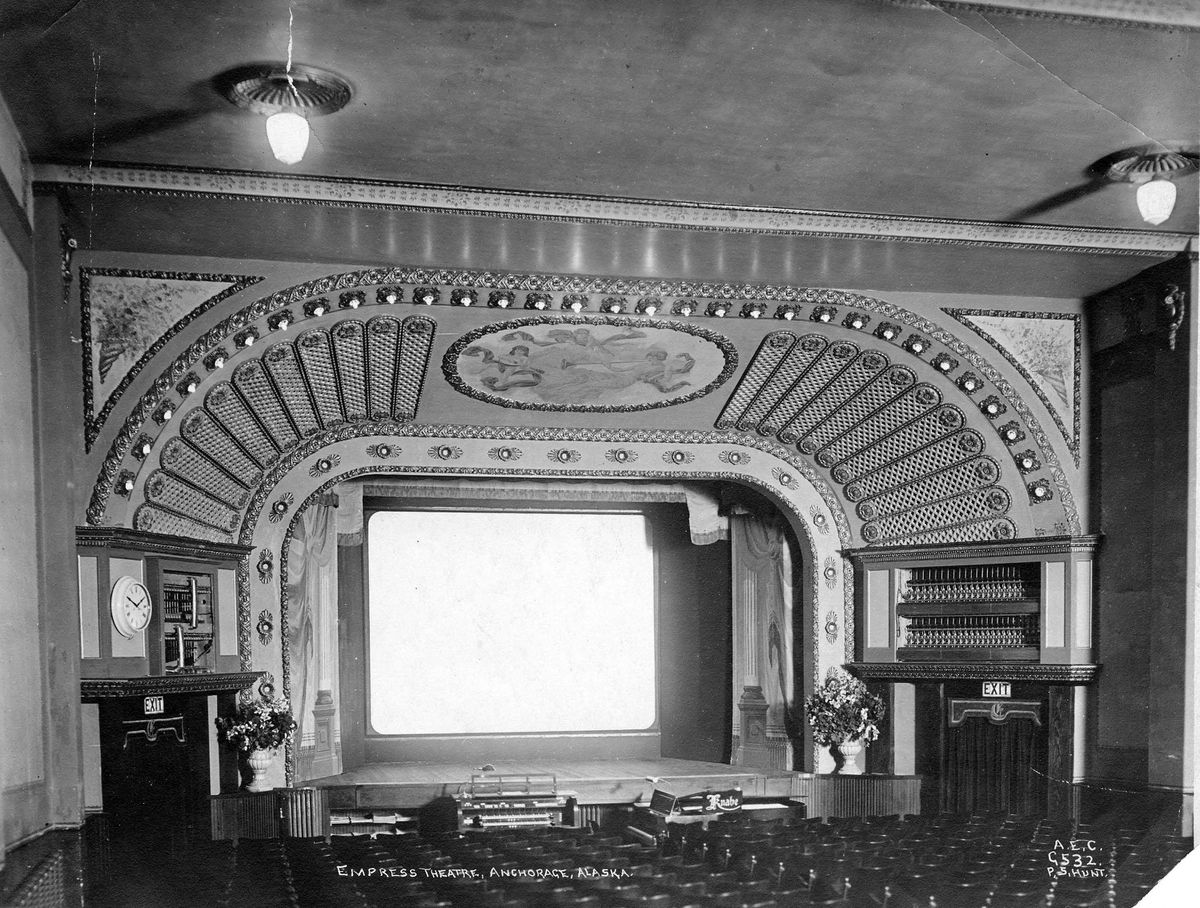 One hundred years ago, just months after Anchorage was incorporated, residents gathered in evening wear for the city’s first full-length classical music concert.

“A Longfellow Evening,” held at the Empress Theatre on Fourth Avenue, drew praise in a review in the Anchorage Daily Times the following day.

The review, nestled between classified ads and a weather report of 36 degrees, said the “large and highly appreciative audience” had attended an event of cultural significance.

“Full credit is due the officers of the society for thus ushering into the social life of the city a degree of wholesome entertainment that in addition to its acceptability as such will exert a tremendous influence upon its advancement into the realm of arts,” the review concluded.

The concert will feature modern-day Anchorage performers and special guests recreating the concert as it was presented in 1921, which includes readings of poetry by Henry Wadsworth Longfellow.

On March 25, a few performers rehearsed in the Alaska Center for the Performing Arts’ Sydney Laurence Theatre in downtown Anchorage, just a few blocks from where the original concert took place. They sang and played to a crowd of video cameras and unoccupied pink and red seats.

Between each recorded session, Wendy Odden, the theater’s production manager, emptied the mostly barren room and methodically sprayed the air and floor with disinfectant from her sanitation backpack.

The next performers were ushered in an hour later.

Anchorage actor David Haynes recorded the concert’s welcome and program notes at the Historic Anchorage Hotel. Haynes will represent the concert’s original director, professor William Parish. Family members of Parish sent some of his belongings and articles they had in Juneau for use in this program, Koenig said.

Although these scenes came in stark contrast to the night of the original concert 100 years earlier, the passion for the arts remained steadfast.

“Getting music up here probably wasn’t easy,” she said. “Even today, doing this program is not an easy program.”

Koenig made note of the complex choral cantata, “The Wreck of the Hesperus,” which features 24 singers and a pianist.

“I don’t know how many cities that young could have put on something so incredible, especially as isolated as Anchorage is,” said Corinne McVee, board president for the Anchorage Festival of Music.

“Just a year later, after the 1921 concert, they do a full opera,” Koenig added.

While the modern-day choristers recorded their pieces from the safety of their own homes, soloists recorded in the theater.

Together, they recorded Ralph Cox and Mildred Seitz’s “To a Hilltop” and Oley Speaks and Marie B. Gannon’s “To You.”

The theater fell silent after the last warm tones echoed from Guggenmos and the piano next to her. Soft claps from Kurt Riemann, an audio engineer and owner of Anchorage’s Surreal Studios, signaled the recording was finished.

A look through the archives

Nearly two years ago, Koenig stumbled upon an advertisement for the Anchorage Choral Society’s 1921 concert while doing research about Anchorage’s first police chief. Noticing the centennial was nearing, she researched the event and its 32 performers. Koenig corresponded with family members of the performers, most of whom live in the Lower 48, gathered newspaper clippings and obtained archived materials from the Anchorage Museum.

Through her research, she was able to stitch together the concert program and uncover stories about the Anchorage performers.

“Music was not just an important part of that society; it was a marker and a harbinger, an indication of the kind of life they wanted to form, and a foundation on which their community would build,” writes Steve Haycox, emeritus professor of history at the University of Alaska Anchorage, in the program’s foreword.

A downloadable PDF of the modern program will be available for free and will include biographies of the original performers.

“We know who they were now and what they did for the community,” McVee said. “It just really brought it home how the arts have been a part of Anchorage since the very beginning.”

Born in 1881, Mabel Zahniser hailed from Pittsburgh and went on to study voice in New York City. It was there that American composer Victor Herbert invited her to premiere one of his pieces, Koenig said.

Zahniser eventually married William Clayton, Herbert’s manager, and together the two traveled to Alaska, where Clayton got a job to be a timekeeper on the Alaska Railroad.

“It must have been this amazing culture shock,” Koenig said.

In subdued similarity to those in the ’20s, Guggenmos, a trained and educated vocalist from Outside, moved to Alaska with her family and wasn’t sure if she’d be doing much singing.

“It’s just good to be able to sing. ... I know so much has been shut down,” she said. “I think anytime, especially right now, I just feel like there needs to be a lot of hope ... and music is a place where we find a lot of hope and joy.”

One of the most gratifying finds was a KNIK radio interview of Dorothea Hervey from the 1960s. The recording, found in the Anchorage Museum archives, was digitized by Riemann.

In it, Hervey, who was a piano soloist in the original concert, talked about musical performers in Anchorage in the early the ’20s, including Capt. Harold Kirkham, who performed with her on April 11.

Koenig had been in contact with Hervey’s granddaughter and passed the recording along. Soon, Hervey’s great-grandchildren wrote to her, some of whom had never heard her voice.

“If that’s the only thing that comes out of this concert, a family heard the voice of their grandmother again ... then all this has been worth it,” Koenig said.

The event is free and will consist of a pre-concert online lecture hosted by the Cook Inlet Historical Society, at 4 p.m. Sunday, April 11. Viewers must pre-register for this event at anchoragefestivalofmusic.org. In addition, the concert will be uploaded to the Anchorage Festival of Music’s YouTube channel the same day.