While 'not a doom-and-gloom outlook,' study says warming poses challenges for Alaska salmon 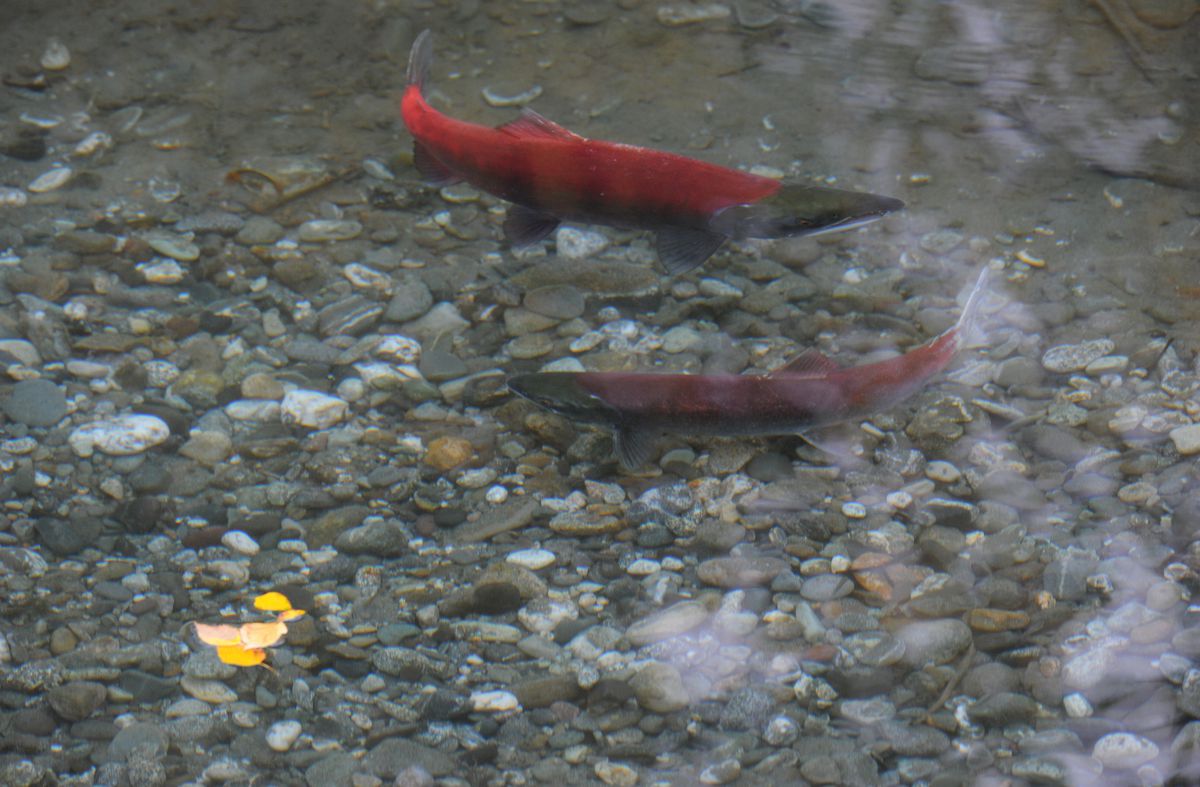 A third of Alaska's salmon harvest each year comes from fish produced in the 17,000 miles of streams in the Tongass rainforest. More than 50 animal species feed on spawning salmon there, and one in 10 jobs throughout the region is supported by salmon.

"Global climate change may become one of the most pressing challenges to Pacific salmon conservation and management for Southeast Alaska in the 21st century" begins a report called "Climate Change Sensitivity Index for Pacific Salmon Habitat in Southeast Alaska" by Colin Shanley and David Albert of The Nature Conservancy.

"In general, the global climate models are saying the wetter places in the world are likely to get wetter and the drier places are going to get drier," said Shanley, who works as a conservation planner and GIS analyst in Juneau.

"This is not a doom-and-gloom outlook," Shanley stressed. "This is really just getting smarter about how climate change may play out and how it might affect resources that are valuable to us."

Shanley studied nearly a half century of records from 41 water gauge stations at Southeast watersheds to project how flow patterns might change.  One conclusion: Watersheds fed by snow packs should experience the biggest impacts.

"Some of the watersheds that are super steep and fed by snow-driven catchments are going to see some of the biggest changes. They might not all be bad, but those are the ones that showed some of the largest changes in flow," he said.

On the other hand, glacial-fed waters could provide new and better salmon systems.

"In Southeast, Southcentral and Prince William Sound there are a lot of glacial-fed systems that salmon use and some that salmon haven't colonized yet. As glaciers shrink and melt, there is some opportunity to create new and, in some cases, better habitat," he said. "Some of those glacial systems are really big rivers, so there are definitely opportunities for some shifts in productivity."

Watersheds in good shape should be fairly resilient, Shanley said. The conservancy plans to restore waters adjacent to roads and culverts while making sure drainage is adequate and adding trees.

"The wood slows down the water, so that can help with higher water levels, and it also provides pools and shade and protection from predators," Shanley said.

More new research by the Oregon-based Wild Salmon Center also provides a glimpse of how a flooded future could hurt Alaska salmon.

In collaboration with the U.S. Forest Service, Sloat modeled the effect of flood disturbances on silver, chum and pink salmon spawning habitats in more than 800 Southeast watersheds.

As much as 16 percent of the silver salmon spawning habitat could be lost by the 2080s, primarily in narrow, steep streams. The effects were lower for pink and chum salmon, which spawn almost exclusively in streams passing through low, sloping flood plains.

Somewhat surprisingly, the study shows that the risk of Southeast floods harming salmon reproduction is much lower than previously thought. That's due to the relatively pristine condition of the area's rivers and flood plains, according to Sloat.

"Flood plains act as pressure-release valves that can dissipate the energy of large floods," he said. "Our results identify key parts of watersheds that, if protected, will continue to buffer salmon populations from flood disturbance in the future."

The popular January Tanner crab fishery has been canceled for the fourth consecutive year in the Westward Region that includes Kodiak, Chignik and the Alaska Peninsula.

During the last fishery, a fleet of 80 or more small boats took a combined catch of about 3 million pounds of crab. But annual surveys showed the numbers of both legal-size males and females don't meet the minimums to permit a fishery.

"We don't seem to be having a problem making small crab. The problem seems to be getting enough of them to a legal size where we can have a fishery," said Nat Nichols, shellfish manager at the Alaska Department of Fish and Game in Kodiak. It takes six to seven years for Tanner crab to reach their mature, 2-pound size.

Kodiak is seeing slight crab increases, especially in its east and southeast districts, Nichols said, but it's slow going.

At Chignik, Tanner crab abundance estimates were the lowest since 1988. In the western Peninsula, the stock remains in decline and the bulk of the crab were clustered into just two areas of one bay.

Biologists suggest a warming ocean and predation may have caused the crab declines.

"We are seeing increases in skates, small halibut, cod and pollock in near shore, so I think it's fair to look at increased predation as a reason why we don't have these small crabs making it to legal size," Nichols said.

Nichols added that for several years biologists have gone beyond the standard survey grid, thanks to funding from the Aleutians East Borough.

"The results of those additional tows indicate that there are small bits of crab everywhere you look," Nichols said.

By the way, Tanner crab is spelled with a capital T because it is named after discoverer Zera Luther Tanner, commander of the research vessel Albatross, which explored Alaska waters in the late 1800s.

Laine Welch is a Kodiak-based journalist who writes a weekly column, Fish Factor, that appears in newspapers and websites around Alaska and nationally. Contact her at msfish@alaskan.com.