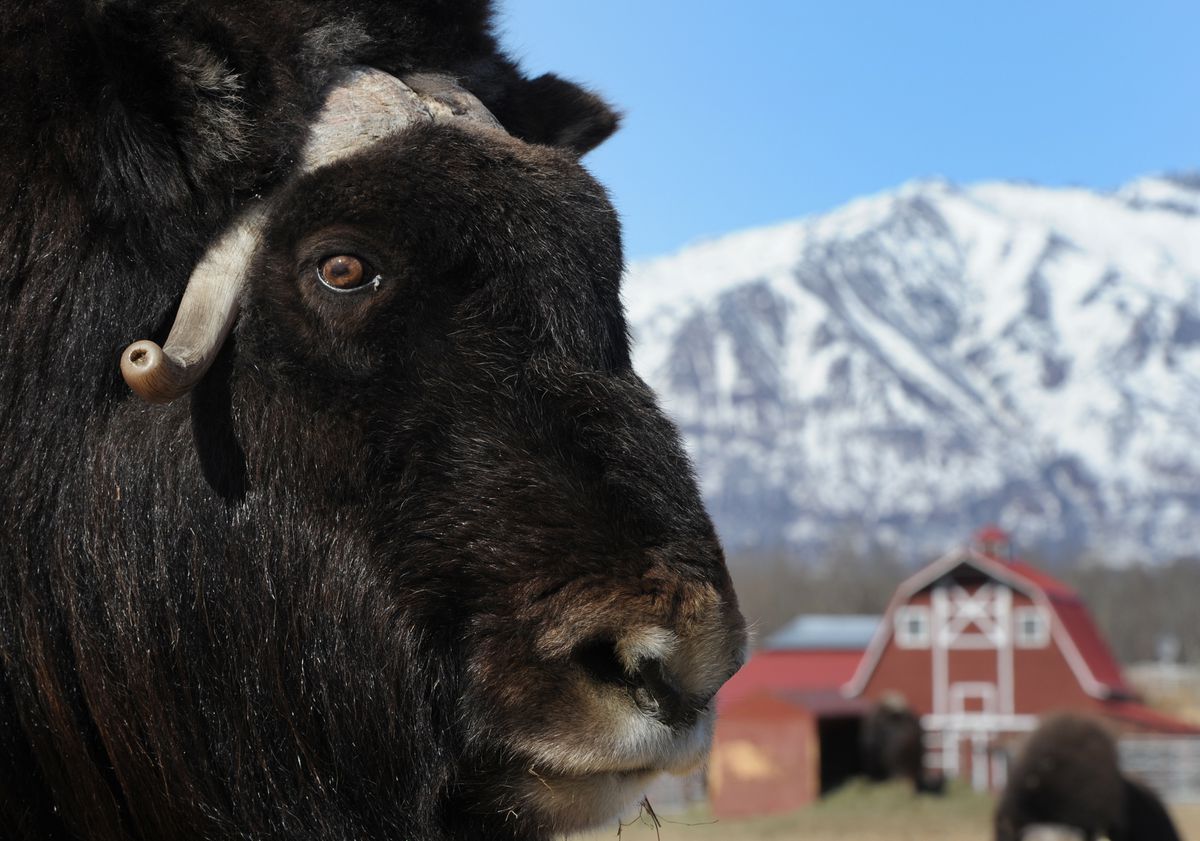 Luna is a 15-year-old musk ox living at the Musk Ox Farm in Palmer. The nonprofit farm will open to the public on Mother’s Day, May 14. During the spring, the under-wool called qiviut is combed from the animals and used by knitters. (Bill Roth / Alaska Dispatch News)

Luna is a 15-year-old musk ox living at the Musk Ox Farm in Palmer. The nonprofit farm will open to the public on Mother’s Day, May 14. During the spring, the under-wool called qiviut is combed from the animals and used by knitters. (Bill Roth / Alaska Dispatch News)

Thinking about farming musk oxen in Alaska for their qiviut but not sure you could actually make any money?

It turns out that you could, but only with some big caveats.

A new study, published in the March Arctic Journal, concluded that raising musk oxen to get qiviut, the highly prized soft woolen undercoat of the animal, could be profitable if the qiviut is spun into yarn or other goods.

But big hurdles in the small market remain, including the biggest: how to get a musk ox when none are for sale.

Lead author Laura Starr considered the feasibility of qiviut farming while working on her master's degree in natural resource management at the University of Alaska Fairbanks.

After working as a graduate assistant at the Large Animal Research Station, which raises a small herd of musk oxen, she decided to look at the sustainability of farming the animals. Musk oxen, which roam wild in northern parts of Alaska, are environmentally suited to being farmed in Alaska.

Many things can be farmed in Alaska that are also farmed in the Lower 48, like cattle or swine. But, Starr said, those Alaska-grown products are often more expensive than what's produced Outside. She wanted to find an agricultural product with a niche market.

Musk oxen qiviut is a niche fiber, known for its light weight and warmth. Cowls and hats can sell for hundreds of dollars. The study notes that a luxury suit made of qiviut sold for $25,000 in 2009. A blanket made of the fiber was gifted by the Canadian government to the U.K.'s Prince George when he was born.

Starr said some farmers have considered musk ox farming over the years, but most have struggled. Her research found that the market lacked the economy of scale needed to be competitive, along with farmers selling only raw material, not value-added products like yarn or woven items.

Musk oxen were reintroduced to Alaska in the 1930s. They roam freely around Nome and on Nunivak Island. Only two musk ox farms exist in Alaska — Palmer's Musk Ox Farm and the Large Animal Research Station at UAF.

But both of those fall outside of for-profit farm structures. While both sell qiviut, the university farm focuses on research, while the Palmer operation is a nonprofit.

The nonprofit status helps the farm stay in operation, according to its executive director, Mark Austin.

Austin said nonprofit status allows the farm to pursue outside funding and do things like offer annual memberships and educational programs that bring in more funds.

Austin said he often gets calls from people interested in farming musk oxen. But the farm doesn't sell animals from its 80-member herd.

He understands how the economics of it could pencil out. An adult musk ox could produce about 2 pounds of sellable qiviut a year. At about $200 an ounce, you could make up to $6,400 a year per animal on qiviut alone. But the supply issues of finding the animals plus the cost of building new infrastructure would make it difficult.

"If we had to start from scratch," he said, "it would be a huge investment."

Starr said the animals verge on being an "exotic" species, given their history. There is still no domestic version of musk oxen, and even the tamest still have wild and unpredictable behaviors.

But she said it was nice to finally quantify the value of qiviut so others could consider economic possibilities of the animal.

"I think if Alaska wanted to promote sustainable options, it really is an excellent option," Starr said. "But someone would have to start the industry up for it to be something."