More Alaskans are working more than one job, but some still struggle to make ends meet 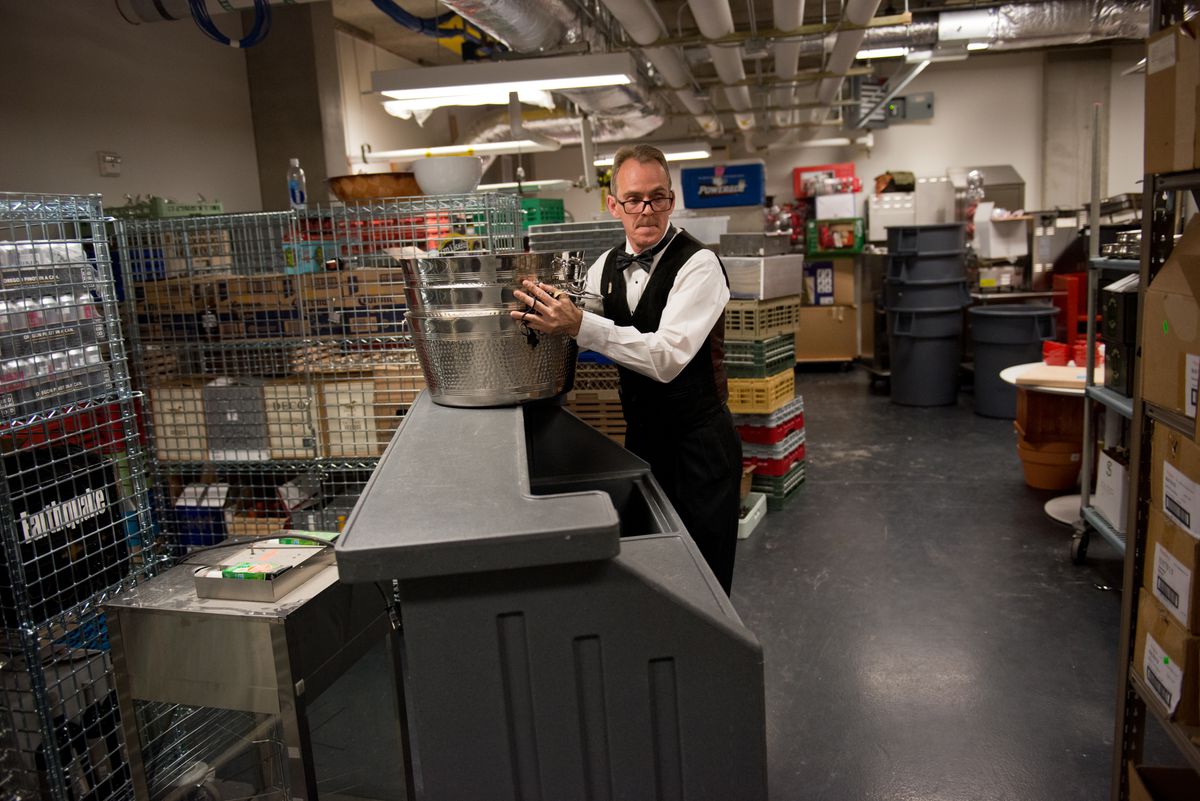 For 51-year-old Lance Rome, it's not uncommon to work 60 to 70 hours a week between his full-time job as a machine operator at Northern Printing and his bartending job at the Anchorage Museum.

Angela Bierman, 29, has worked two jobs for more than a decade, much of that time spent toggling between a steady position in sales at Barnes & Noble and a variety of other Anchorage retail gigs at places like Forever 21, Famous Footwear and Office Max.

In Fairbanks, 28-year-old Katrina Thomas works full-time at Access Alaska, which provides services to disabled and elderly Alaskans. But she also works a patchwork of part-time jobs, all while going to school to earn her bachelor's degree.

All three are among the chunk of Alaskans who have more than one job, a figure that is more than twice as high in the Last Frontier as it is nationwide.

In 2015 in Alaska, 11.2 percent of the state's workers held multiple jobs, according to a recent report from the Alaska Department of Labor and Workforce Development. That's compared to 5 percent of people across the country who held down more than one gig in 2016, according to numbers from the U.S. Bureau of Labor Statistics.

Part of the higher number here is likely because of Alaska's many seasonal jobs, suggested Joshua Warren, an economist with the state labor department who authored the report. The department's data counted only workers whose jobs overlapped for two or more quarters, with the exception of also counting people who worked the same job throughout the year, plus another job in a single quarter.

The portion of workers in the state with more than one job went up just slightly — by 0.5 percent — between 2010 and 2015, just before Alaska slid into its current recession. But overall, people with two jobs in the state still make less than people with just one job.

"What I was surprised by, I guess, was that it hadn't gone down, but that's because it was all before the recession," said Warren.

Thomas, in Fairbanks, said she took on extra work because she "didn't want to be struggling as much" to pay rent and hefty utility bills. She said she made about $32,000 last year, not counting tips that she stashes away for college.

[Personal income in Alaska drops after decade of solid growth]

Shanika Dunn, 26, lives in the small community of Copper Center, about 200 miles east of Anchorage. She juggles working at Mountain View Grocery Gas and Liquor, bartending on the weekends, and driving a shuttle in the summer for a friend's fishing guide company.

She also has a 6-year-old son to take care of. How does she balance it all?

"Barely," she said, citing the high cost of living as the main reason she works multiple jobs. "I schedule very well. But this summer is going to be insane."

Though yearly wages grew for all workers in Alaska between 2010 and 2015, the labor report found, the increase was less on average for people who had more than one job. And now, those with several jobs are earning less overall than their single-income counterparts.

"People who held extra jobs in 2010 earned almost $2,000 more than those who worked just one," according to the report. "But although multiple jobholders' overall wages had increased by 2015, they were earning about $250 less than their single-job counterparts."

That's probably because people are staying in second jobs for shorter periods of time, the report said.

"It'd be better if they were making more money after having two jobs," Warren said, "but it's good that they're able to get jobs."

The top five primary and secondary occupations for people who juggled multiple jobs in 2015 were retail salespeople, personal care aides, cashiers, servers, and janitors and cleaners, according to the state report.

At Costco in South Anchorage, general manager Bob Ripley said he's sure a good number of workers at the store have a second job elsewhere, but it doesn't create challenges for the company when it comes to things like scheduling.

"Ideally it'd be great if our employees didn't have to have that second job," he said. Even though workers there start at $13, above minimum wage, he said, "It's still a starting wage. I'm thinking, if I started at that wage, would I be able to live in Anchorage in a one-bedroom apartment? It sort of forces somebody to (find another job)."

[Local government was a growth industry in Alaska in 2016. Wait, what?]

Matt Deluca is the store manager at Target in South Anchorage, and he said accommodations for school and child care are the two biggest reasons he sees for employees needing two jobs.

For most people, a second job only makes up a small chunk of their income, the state found, and second jobs "tend to be lower-paying and lower-skill occupations" usually outside the worker's primary industry, possibly because the typical second job — usually in the service industry — offers more flexible hours.

At Moose's Tooth Pub & Pizzeria, also in Anchorage, general manager Dan Fiacco estimated about 15 to 20 percent of the restaurant's roughly 250 employees are also working somewhere else, and one perk there is flexibility in scheduling.

"I would say a lot of the people with second jobs tend to work in other restaurants or retail outlets," he said. "We've had a lot of cross with REI."

In smaller communities farther away from Alaska's largest city, some say it's almost necessary for people to wear several hats in order for jobs to get filled, said Alice Aga.

She's mayor of the tiny Kodiak Island community of Larsen Bay, where the 2010 population was 87, and on top of that also works as a school aide, and collects mail from planes that come in, to take to the post office. The 30-year-old makes about $48,000 a year.

"It's hard getting people that can really be involved and active in such a small community, when two-thirds of the community are elders, the rest are youth who are still in school, and the ones in between are the ones with substance abuse and alcoholism," she said.

Dunn, in Copper Center, noted a similar situation in her community.

"Out here, it's really weird," she said. "There's job opportunities available for people but part of the reason I'm having to stretch myself thin is there's not enough reliable workers."

For many, though, working more than one job is about having enough money to afford anything beyond the bare minimum of rent and monthly expenses.

"My full-time job can cover all my bills, but it doesn't cover any extras," said Kerry Kirby, 42, who lives in North Pole.

She works full-time for the city of Fairbanks as a purchasing agent, but also bartends at the Blue Loon and is an adjunct professor at Wayland Baptist University. Juggling all of those helped with buying a house in 2011.

"I'll probably never be a 'one full-time job' girl," she said.

Edmund Poirier, who lives in Anchorage, also works at two places to be able to afford "things that aren't necessities."

The 27-year-old has a full-time job at Battery Specialists of Alaska to cover the bills, and then works a janitorial job at F Street Station downtown. Between both positions, he said he recently worked a four-month stretch without a day off.

In most parts of the state, the state report said, about 10 to 14 percent of people have multiple jobs. Women were more likely to have a second job than men, and most people with more than one position were in their 20s and 30s, according to the labor report.

When Rome moved here from Nebraska three years ago, he got his bartending job in addition to working at Northern Printing to handle the higher cost of living, "get ahead as fast as possible," and fill his empty apartment with furniture.

Now, he makes around $60,000 a year, and said he's able to enjoy working so much every week because of how different his two jobs are.

"I don't have to work two jobs anymore, but I just enjoy what I get out of it all," he said. "I make above average wage, but things up here are a little more expensive."