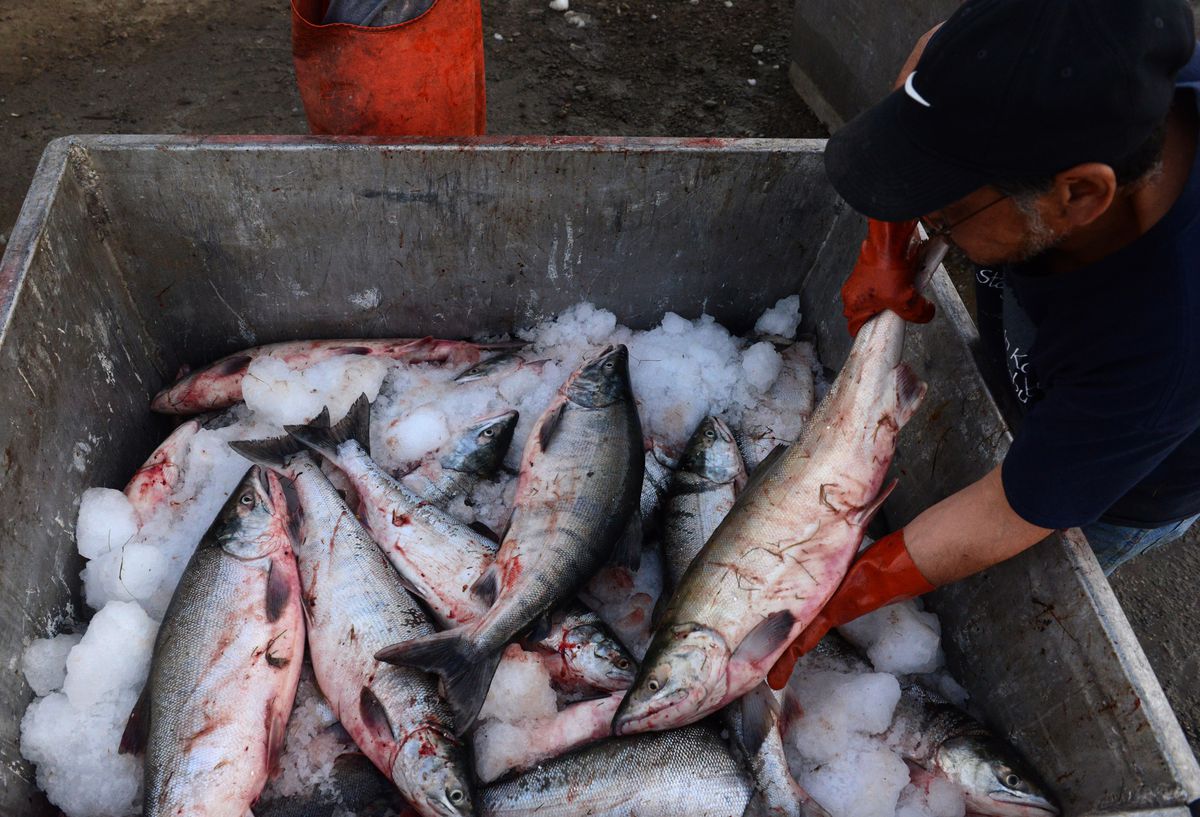 Alaska's salmon season is winding down and while catches have made the record books in some regions, the statewide take will fall a bit short of the 204 million fish forecast.

"We are within about 10 percent of the forecast, so that's very positive and overall it's been a pretty good season," said Forrest Bowers, deputy director of the commercial fisheries division of the Alaska Department of Fish and Game.

The statewide salmon catch through Friday topped 191 million. The shortfall, Bowers said, stems from the arrival of fewer pink salmon.

"We were expecting a harvest of about 142 million," he said. "Right now it's at 114 million. We're probably not going to catch another 30 million pinks between now and the end of the season."

Still, the "bread and butter" catches are far better than last year when pink returns were so dismal it prompted a disaster declaration by Gov. Bill Walker.

This summer's humpy haul at the three prime producing regions all is in the low end of the forecast ranges, with Southeast on its way to 28 million, Kodiak at 19 million and Prince William Sound nearing 42 million pink salmon. Some fishermen blame humpback whale predation for lower pink salmon catches in the sound.

One big pink winner this year is the Alaska Peninsula, which had a "spectacular season," Bowers said.

"Their pink harvest (nearly 19 million) and chum catch (nearly 2 million) will end up in the top five on record," Bowers said. "And the Peninsula sockeye harvest (7 million) is going to the second or third largest ever."

Sockeyes help offset any salmon shortfalls this season with a statewide take of about 52 million, some 37 million from Bristol Bay.

"It is the 10th time in history that we've harvested over 50 million sockeye salmon," Bowers said. "Catches for the previous two years also topped 50 million, but prior to that, you had to go back to the mid- to late 1990s to see such a large sockeye harvest."

Perhaps the biggest salmon surprise this year was the huge returns of chum salmon across the state. The catch to date of 21.2 million chums is just shy of the all-time record of 24 million fish set in 2000.

"It's one of the six times we've ever harvested over 20 million chums. That was a surprise. We didn't expect that at all," Bowers said, adding that coho catches also are stronger than usual.

Western Alaska salmon fishermen also are enjoying some of the best returns ever.

At Norton Sound, catches of chums and cohos (more than 300,000 combined) are in the all-time top 10. At Kotzebue, the chum fishery has topped 400,000 for the second year in a row and could rank as the sixth best in the 56-year history of the fishery.

On the Yukon River, a catch of more than 1 million chum salmon has been taken so far, with the best fall catches in history.

The Yukon also saw its biggest king salmon return in a dozen years.

Salmon even appeared in Barrow, where locals were able to pack their freezers with a mix of chums, pinks and kings.

"That's a relatively new phenomenon," Bowers said. "We don't have any assessment projects to monitor up there, but it's pretty exciting. That would be a range extension potentially for some species, and it will be interesting to hear if those have established themselves as spawning populations or if it's just a few strays that wandered up there."

The only western region that was a total bust was the Kuskokwim River, where enough sockeyes and coho salmon returned to allow for harvest opportunities, but there were no buyers.

Another big salmon downer this year was the unprecedented and complete king salmon closure in Southeast, the largest producing area. Catches there totaled just 165,000 fish; statewide, some 244,000 king salmon have been taken.

Bowers said it's too soon to predict a total dockside value for the 2017 salmon catch, but with higher prices across the board, it will almost certainly eclipse the 2016 value of $406 million.

Alaskans should be on the lookout for some of the 300,000 Atlantic salmon that escaped a week ago from a failed net pen near Bellingham Bay, Washington. The 10-pounders are reportedly "heading for every river in Puget Sound," according to the Seattle Times.

The salmon were undergoing a yearlong treatment for a bacteria called yellowmouth. They are the property of Cooke Aquaculture, the largest farmed salmon producer in North America and the new owners of Icicle Seafoods in Alaska.

Several hundred Atlantic salmon have been taken in Alaska waters in past years, and Bowers said some of the latest escapees will probably make their way here.

He said it is not likely that the Atlantics would breed with Pacific salmon, or even with each other.

"They may be triploids that are sterile, but I'm not sure about that. But certainly large numbers of these fish competing for food and other habitat resources with native Pacific salmon, Dolly Varden or steelhead trout is a concern for sure."

Anyone catching an Atlantic salmon is urged to report it, and if possible, bring the fish to a local Fish and Game office. The department's home page has an "invasive species" link with reporting instructions, and a hotline number (1-877-INVASIVE).

Fewer fish are being discarded by the world's fishing fleets, according to the University of British Columbia catch reconstruction project. But they still are tossing back 10 million tons of fish every year — 10 percent of global catches. Nearly half of all discards occur in the Pacific Ocean.

The discards are fish that may be too small, damaged, inedible, out of season or of little market value.

Prior to the year 2000, discards made up 20 percent of the world catches, reaching a peak of 19 million tons in 1989. Discard levels have dropped steadily since.

Declining discards may reflect lower global fish catches. With fishing operations catching fewer fish, there's less for them to throw away. From 1950 through 1996, world catches rose from 28 million to 130 million tons per year. Since then fish catches have declined by 1.2 million tons a year.

Better fisheries management in some areas also has played a role in reducing discards, including strict rules on reducing waste and forbidding discards in Norway and parts of Europe.

The location of fish discards also has shifted. From the 1950s to the 1980s, discarding occurred mostly in northern Atlantic waters off the coasts of the U.S., Canada and Europe.

In the Pacific Ocean, discards hit a high of more than 9 million tons in 1990 and have declined since to less than 5 million tons per year. Pacific fish discards happen mostly off the coasts of Russia, East Asia, and Southeast Asia. Russian fishing fleets have accounted for more than half of the discards in recent decades.

In Alaska waters, much of the fish taken as bycatch is not discarded but donated to food banks.