South Anchorage entrepreneurs team up for a trendy new destination 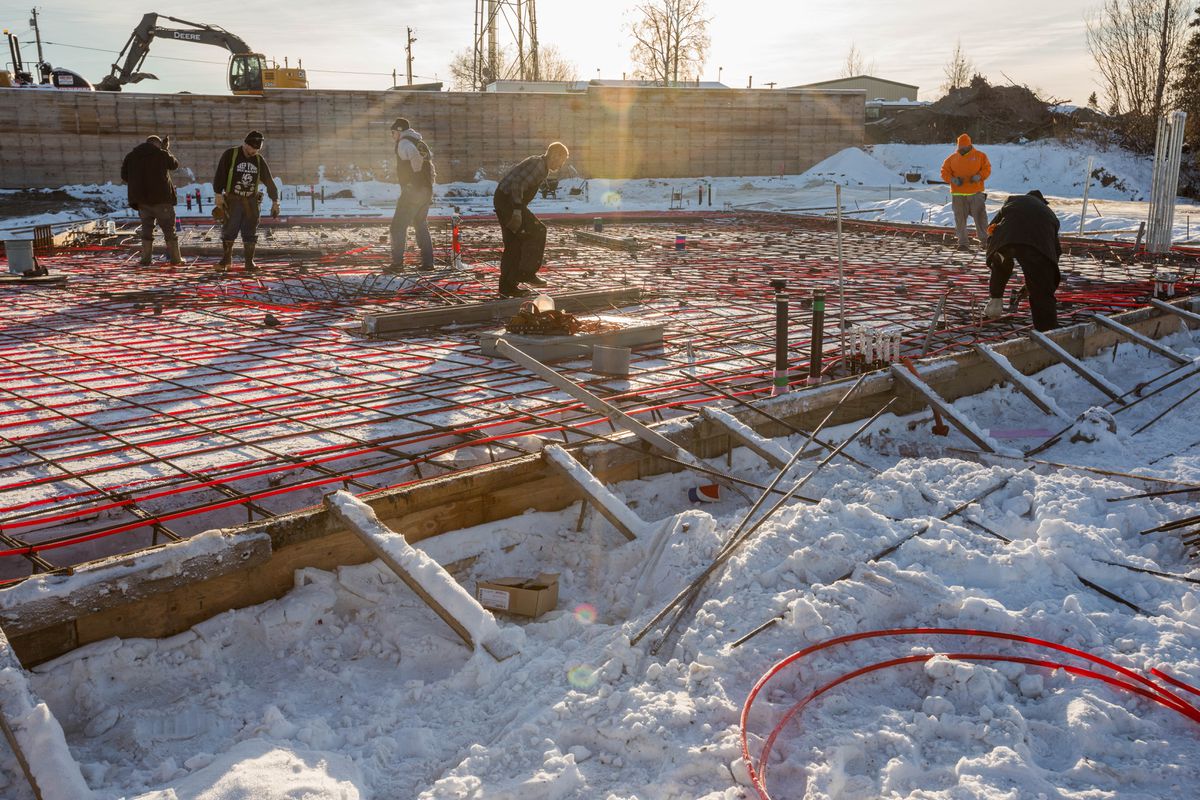 A handful of business owners are planning a development in a small industrial pocket of South Anchorage in hopes of creating a trendy new destination.

A cycling studio, an auto shop for high-end and specialty cars, and Fire Island Rustic Bakeshop's third location are planned to open next year at the end of the cul-de-sac that's currently home to Anchorage Brewing Co., on West 91st Street just off King Street. Also on that same road, King Street Brewing Co. plans to open a new and larger location in the spring.

Ralfy Quepons owns the plot of land through his business, Culmination Motorsports, which is set to go there along with the bakery and Vib Cycle (pronounced "vibe"). He's calling the project, yet to be constructed, "the Culmination Building." Crews were working on the snowy site Wednesday afternoon, and the plot was full of construction equipment.

The development largely started as an idea between Quepons and longtime friend Gabe Fletcher, owner of Anchorage Brewing.

"It's kind of like a bunch of friends," Quepons said. "When you come over, there's purposely no lobby in our (auto) shop. When you come, go to Fire Island or the brewery or the cycle studio. It'll be cool to get your car worked on because it's a destination — it's a community."

For Fire Island, the new location would be a departure from its others in South Addition and Airport Heights.

"Our other two places are embedded in neighborhoods and we just couldn't find that in South Anchorage, so we're changing our model," said Fire Island co-owner Janis Fleischman. "We'll see how it goes in that market."

She also hedged Fire Island's plans a bit, adding that a lease hasn't been signed yet.

"We're excited, but we've certainly had deals fall through in the past," she said. "I think it's going to be a go."

Vib Cycle is owned by former Anchorage Cycle instructor Jacenda Fletcher, Gabe's wife, and Lindsey Sawicki. Jacenda hopes the development, where her business will offer indoor cycling and other fitness classes, will make the area a trendy spot in town.

"I feel like our client base is kind of the same," she said. "People interested in being part of the community."

Gabe said Anchorage Brewing also plans to plant an orchard, which would be open to customers, alongside his business, as well as a garden space that Fire Island could use to grow greens and herbs.

Quepons hopes the development will be ready to open in March. He works on the North Slope for Hilcorp as an oil production operator, but he "lives and breathes" for his auto business. He said he's partly funding the new building with money he's saved up over the years, and then will likely make up the difference with a loan from a local lender.

Culmination Motorsports currently operates on Toloff Street, Quepons said, but he hasn't done much in the way of advertising. The business focuses on restoring and repairing German vehicles with a focus on Porsches, many from the 1950s and '60s, and Volkswagens, especially Vanagons. He also plans to rent out Vanagons from the new space.

"When we started the business, we were small … and then we realized there was a crazy demand for this service," Quepons said. "We brought a lot of cars out of the woodwork. Cars that were just sitting in people's garages. People saying, 'I don't have to ship my car out of state? OK, I'll get it serviced here.' "

It's not like a dealership, he stressed, or anywhere someone might take a car for a quick oil change.

"More like the boutique of car places," he said. "Our customers really love their cars. Their car has a name. It's a relative in the family."

[This Alaska industry is booming in spite of the recession]

Just down the street from the new development, King Street Brewing is in the process of building a new spot to relocate to, at the corner of 91st Street and King Street. Walls there have been erected, and crews are working to finish construction in coming months. Currently located about a mile north of the new spot, the brewery is moving to accommodate growth.

The owners, Shane Kingry and Dana Walukiewicz, aren't worried about moving so close to another brewery. They wanted to stay in South Anchorage because of the growing craft beer market in that part of town, and they see King Street and Anchorage Brewing as complementing each other.

"(Anchorage Brewing) really makes much more, I'd say, exotic beers, and we're kind of perhaps more of your everyday beers," said Walukiewicz. "If anything, it's going to bring more people to the area and give people more of a chance and variety to try different things."

King Street opened in 2011. Its new space should allow the company to double its brewing capacity and then continue to grow, Walukiewicz said.