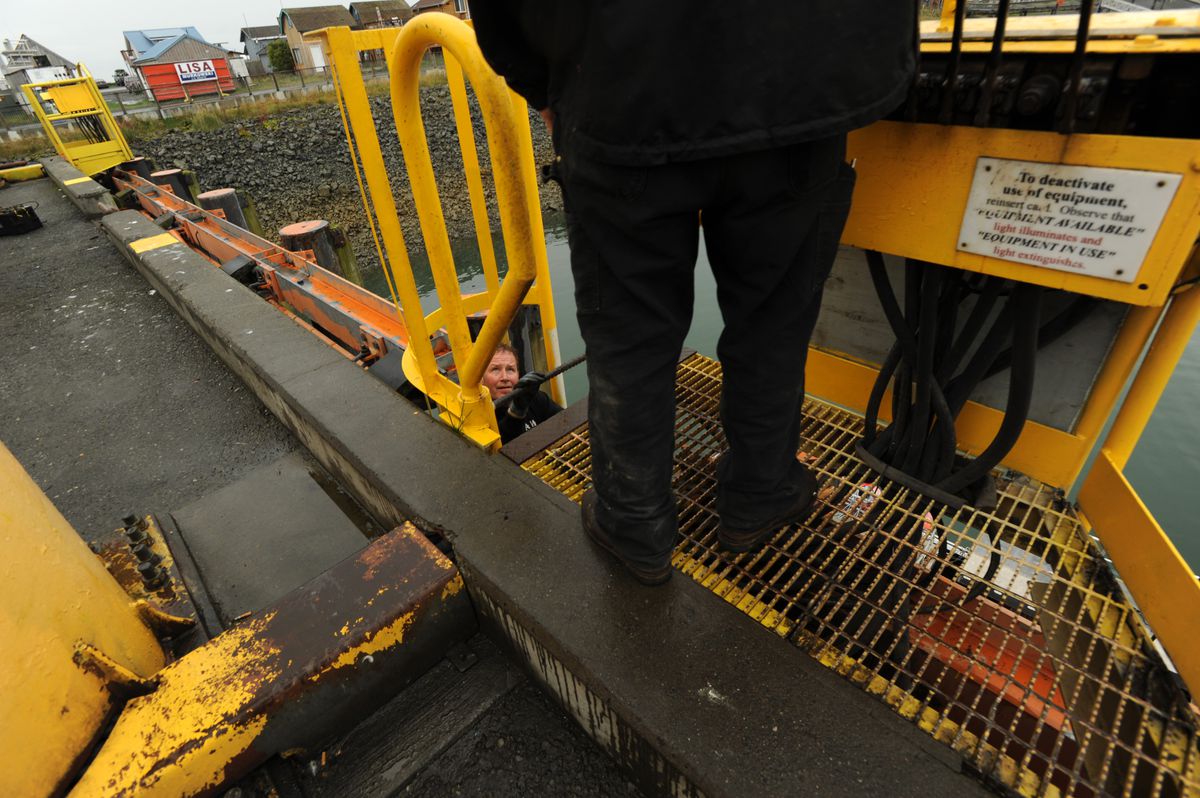 Jeff Folk, deckhand on the Deliverance, heads down the ladder to the boat, while Todd Hoppe, owner and captain of the vessel, operates the crane, Aug. 9, 2016. The crew had just finished tendering and were outfitting the boat to go out longlining. (Anne Raup / ADN)

Jeff Folk, deckhand on the Deliverance, heads down the ladder to the boat, while Todd Hoppe, owner and captain of the vessel, operates the crane, Aug. 9, 2016. The crew had just finished tendering and were outfitting the boat to go out longlining. (Anne Raup / ADN)

The clamor of "take me fishing" is taking on new meaning in Alaska.

Prospects for a deckhand apprenticeship program just got a big lift from a $142,000 national grant awarded to the Sitka-based Alaska Longline Fishermen's Association, and the group plans to get more boots on deck statewide.

Deckhand apprenticeships are recommended as one way to attract younger entrants into an industry where the average fisherman's age in Alaska is over 50.

ALFA has been crafting a local deckhand training program since 2015, and the grant from the National Fish and Wildlife Foundation will be used to develop curricula and protocols for skippers and crew statewide, said ALFA outreach coordinator Alyssa Russell.

[Alaska's fishing fleet is graying, and that's not a good thing. A new report suggests answers.]

Salmon troller Eric Jordan gets the credit for inspiring the program, Russell said, adding that he has taken out 25 greenhorns so far for short-term crew jobs on his fishing vessel I Gotta.

"Finding crew with some experience, who loves fishing in Alaska, is so critical to the future of our individual businesses in the industry as a whole," Jordan said. "This program gives them the taste of it. Deckhands know they like it, and skippers can recommend them for future employment. It is a win-win for everyone."

ALFA took Jordan's model and developed it into a more formal ALFA program, and "tried to rope in other skippers and deckhands," Russell said. "We want to give skippers the tools they need to mentor someone. For instance, safety procedures, crew contracts, and basic checklists of protocol for someone who has never been on a boat before."

Jordan said he has been inspired by the enthusiasm of budding fishermen on his many "experiential trolling" trips.

A report released this month called "Turning the Tide" highlights the "graying of the fleet" and recommends ways for a new generation of Alaska fishermen to enter the industry. The study was compiled by Paula Cullenberg of Alaska Sea Grant; Rachel Donkersloot with Alaska Marine Conservation Council; and Courtney Carothers, Jesse Coleman, and Danielle Ringer of the University of Alaska Fairbanks.

Alaska's halibut and sablefish fisheries produced a combined value of $208 million this year, a 10 percent increase. At the same time, the value of Bering Sea fisheries crab tanked.

The data come from the tallies of Alaska fishermen who hold catch shares of halibut, sablefish and Bering Sea crab. They each pay an annual fee to the federal government to cover management and enforcement costs for the fisheries.

The fee, which is capped at 3 percent, is based on dock prices through September and averaged across the state. For halibut and sablefish, a payback at 2.2 percent yielded $4.7 million for coverage costs.

"Enforcement costs for those fisheries went down by 44 percent from last year," said Carl Greene, cost recovery coordinator for NOAA Fisheries in Juneau. He said bills recently went out to 1,894 quota share holders, down 74 from 2016.

It was sablefish, not halibut, that bumped up the value of the combined fisheries.

Prices to fishermen for halibut decreased by 35 cents this year, while sablefish dock prices increased by 50 cents.

"The halibut prices decreased to $6.32 per pound and sablefish increased to average $4.84 per pound," Greene said.

Federal managers don't track dock prices for Bering Sea crab, only the total value of the fishery, which saw a steep drop. The value for the 2016-17 season totaled $188 million, a decrease of $40 million from the previous year.

The fee for crab catches paid by 18 quota share holders remained flat at 1.6 percent and yielded $3 million for enforcement costs.

For just the second year, groups of big Bering Sea trawlers that fish for flounders, pollock and other whitefish, including vessels owned by CDQ groups, are pitching in for fishery coverage costs. Their fee of roughly one percent yielded just over $2 million.

It's holiday time, but many Alaska fishermen are still out on the water and more openers are coming online. Catch forecasts for 2018 also are trickling in almost daily from state and federal fishery managers.

Trawlers are still able to fish for flounders, mackerel, perch and other whitefish, and cod is open to longline, jig and pot gears through Dec. 31. Then Jan. 1, a cod season will reopen in both the Gulf and Bering Sea.

In Southeast Alaska, divers are still going down for giant geoduck clams and sea cucumbers. Salmon trollers got the good news that the winter chinook fishery will remain open until further notice. A downturn in king salmon has managers using extra caution with catches. A closing date for the fishery, which typically can run through April, will be set at the upcoming Board of Fisheries meeting in Sitka.

Also in Southeast: The 2018 forecast for the Sitka Sound herring fishery is 11,128 tons, down from 14,649 tons this year. The Sitka herring fishery usually kicks off in March.

At the state's largest herring fishery at Togiak, the 2018 catch is pegged at 24,042 tons, up slightly from this year.

Bering Sea crabbers will be back out on the water in January targeting snow crab and Tanners.

Alaska's largest fishery, pollock, will open Jan. 20 in the Gulf and Bering Sea, including at Prince William Sound, which has a 7.1 million pound catch quota.

The Alaska Board of Fisheries meets Jan. 11-23 in Sitka. The board will consider 153 proposals regarding Southeast and Yakutat fish and shellfish issues for commercial, subsistence, sport and personal users.

Catch limits for the 2018 Pacific halibut fishery will be announced by the International Pacific Halibut Commission at its Jan. 22-26 meeting in Portland, Oregon.