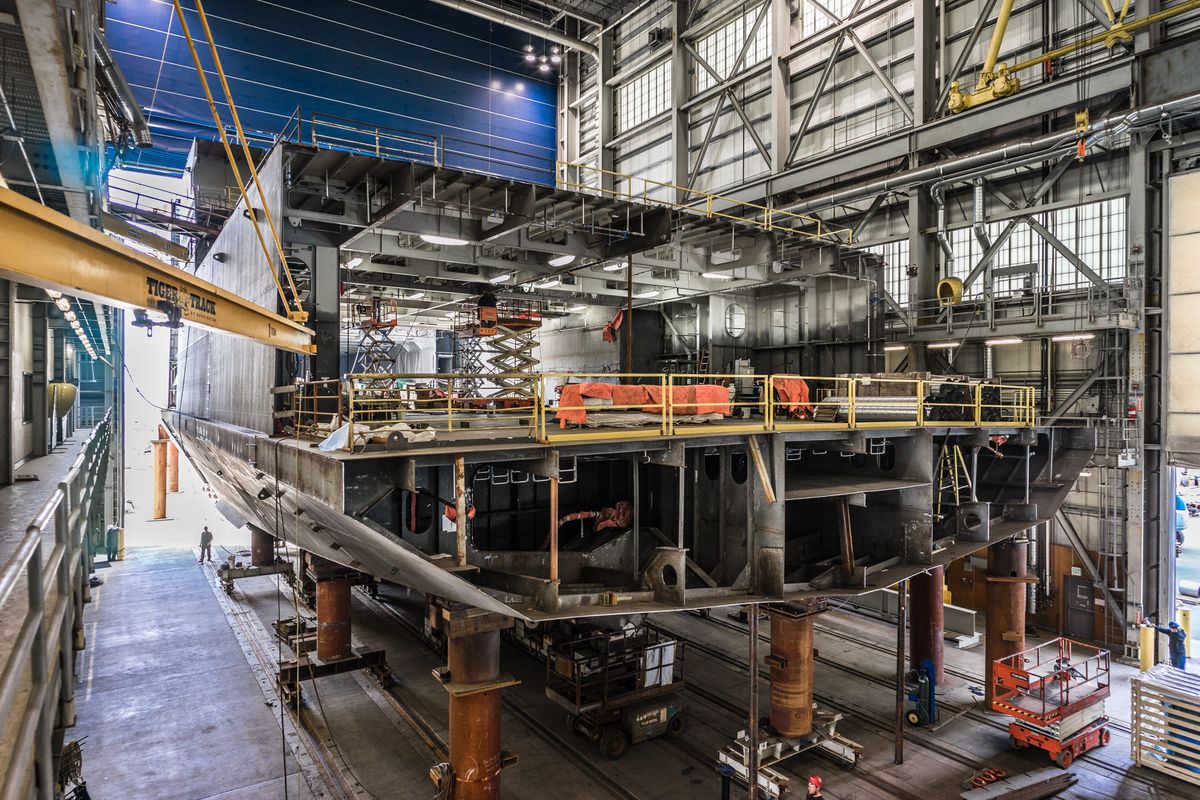 The second half of the Alaska Marine Highway System’s Tazlina nears the end of the modular construction process at the end of May 2017. (Photo provided by Vigor Alaska)

The second half of the Alaska Marine Highway System’s Tazlina nears the end of the modular construction process at the end of May 2017. (Photo provided by Vigor Alaska)

Growing the shipbuilding and boat building industry in Alaska could be one way to diversify the state's heavily oil-dependent economy, according to a new study by the University of Alaska Center for Economic Development.

The report is the first of several that will be released this year looking at economic sectors Alaska might try to grow. The university is partnering with the Alaska Department of Commerce, Community and Economic Development to produce the series, assessing the potential of several industries.

Marine transportation is already crucial here, from the state's ferry system to the cargo ships that Alaska relies on to the fishing industry and recreation.

Right now, facilities in the Lower 48 — especially in Washington and Oregon — build a large share of the vessels that operate in Alaska, but the manufacturing of boats and ships here is an industry with high growth potential, according to the study.

"So much of the economy is tied to vessels," said Nolan Klouda, executive director of the CED at the university. He worked on the study. "It means there's this large in-state market for marine vessels, and any work we can do where we can build or service more vessels, that's money that stays in Alaska."

There are constraints to growth in the industry, the report said, including labor availability, financing and a need for more space. There are also things policymakers and the business sector can do to foster shipbuilding and boat building here, such as developing shared branding and marketing for Alaska-built vessels and promoting innovation in the maritime sector.

"It's important for our conversation about the economy not to just focus on oil and gas," said Gretchen Fauske, associate director at CED. "It's important to talk about other industries and bright spots that have potential."

Alaska has roughly 30 active boat building and shipbuilding businesses, according to the study, and the sector has about 300 to 400 employees in ship and boat manufacturing and repair combined.

Most of the companies in the sector in Alaska focus on boats (smaller vessels); Vigor Alaska in Ketchikan is the only one that builds ships. Vigor also operates the Ketchikan Shipyard on behalf of the city, the Ketchikan Gateway Borough and the Alaska Industrial Development and Export Authority.

"The potential for growth is certainly here," said Doug Ward, director of shipyard development at Vigor Alaska. "However, Alaska has a disadvantage in that our workforce is what I'd call a nontraditional manufacturing workforce. That means … in Alaska we haven't done a lot of shipbuilding or repair recently, in the last 30 to 40 years."

Vigor isn't the only one citing workforce issues. Out of the 14 companies interviewed for the report, Klouda said, "almost everyone" mentioned being constrained by a limited workforce.

"Everything from needing people who are skilled when it comes to welding all the way down to people who will show up and learn," he said. "A lot of these boat building companies are in smaller coastal towns where a lot of workforce is going commercial fishing in summer. That's kind of an issue."

Since oil prices dropped precipitously starting in 2014, the state has lost thousands of jobs in the oil and gas sector, and losses in that industry have rippled through others.

"There may not be any one thing that strengthens Alaska's economy," Klouda said. "It may not be that there's some big new industry that takes the place of oil, but that there are a number of areas of high potential."