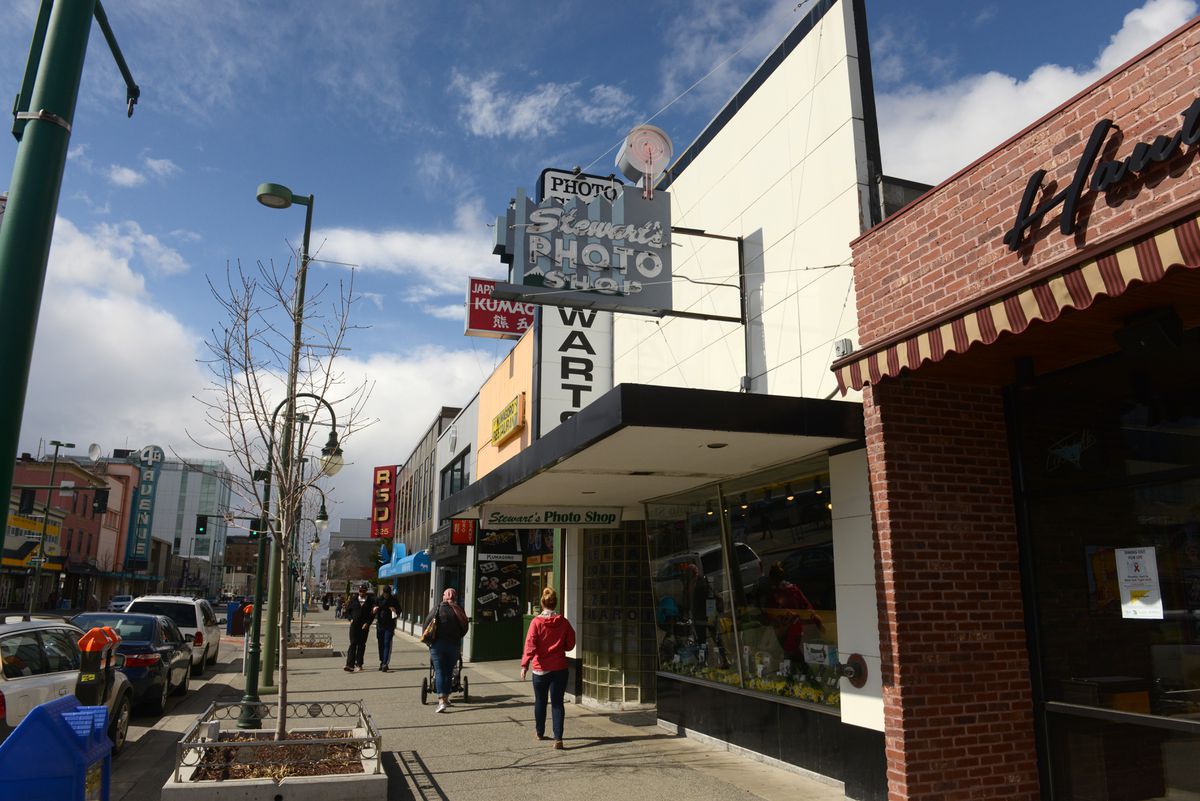 This is an installment of Shop Talk, an occasional series of interviews with business owners in Alaska, focusing on the state economy and how it is affecting them.

Long ago, the Stewart's Photo building on Fourth Avenue in downtown Anchorage was a meat market — a sign that reads "wholesale & retail meats" is still tucked away in the basement.

In the same room, big jade rocks are strewn across the floor, looking like they've spilled out from a storage space. For years, the store has used the jade to make jewelry and other items for sale alongside its camera equipment. In another room, there are boxes of old slides with labels like "Alaskan day lilies" and "high tide Portage Alaska 1964 quake."

Husband and wife Ivan and Oro Stewart started Stewart's Photo in Kodiak in 1942 and the business moved to Anchorage the following year. It bills itself as Alaska's largest photo store. Inside the shop, photos on the wall show the massive destruction of the 1964 Alaska earthquake — which left the store itself with only minor damage.

The shop's current owner, Steve Ellis, inherited the store and has owned it since 2002. He talked to the Anchorage Daily News about the business.

So you're the only camera shop in Anchorage?

People have studios that will take your picture. We don't do that. But they don't sell things. We're the only real camera shop. There used to be three Ritz (Camera) stores … maybe 10 years ago. So we're the last one standing.

Well, it's always been seasonal. We do, let's say, from May 15 to Sept. 15, probably do maybe half our sales. Because we have a lot of tourists come in, and even people from out of state or wherever buy cameras because there's no sales tax. So that helps. And then people generally take more photos in the summer.

The other big development, when I took over, digital cameras were just coming in. … We sell some film, but it's all digital now. At first, the conventional wisdom was that that would hurt us. But actually I think it's worked out well. New models come out, always upgrading. People, I think, turn over their cameras more frequently than they did perhaps 20 years ago. Just continually upgrading them and improving them.

But what about running a business at a time when a lot of people just use their phones for photos? What has it meant for your business?

Not too much. It's hurt a little. We have a full line of cameras from, say, $200 to several thousand dollars. Those smaller ones we refer to as point-and-shoot cameras, those sales have been hurt significantly by the cellphones. But really, that's the only thing.

Lots of camera shops, businesses like this, have died out. What are the challenges and do you worry about the future?

It's different than the old days because we don't have cameras here to compete with us, camera stores. But there are box stores, Best Buy, and then, of course, the online business.

Generally though, the suppliers — Canon, Nikon — they are pretty strict about watching their prices on the internet so that Amazon, for example, can't undersell us. … We have the same price, and with us they can come in and look at the camera and it's here, they don't have to pay shipping.

So box stores or the internet are probably more competition for you than people using their smartphones.

Right. … A lot of times when a new camera comes out, we have a waiting list, 10 to 12 people. So, we do pretty well. The economy's hurt us a little bit just because people don't have as much discretionary income to spend. Our best year was perhaps three or four years ago, and our sales have declined just a little bit, maybe 5 percent or so for the last two or three years.

Why did you decide to keep the jade part of the business?

Well, it'd been here since day one and I'd inherited the store from Mrs. Stewart, and she was very fond of that part of the business. And a lot of people, they're just used to having that here. Although we probably have about half as much as what we did 10 years ago.

You were talking about how Alaska's economy has affected you. Have you had to change the way you do things? Or are you just riding it out?

I don't think it's even so significant that there's even an issue of riding it out. It's kind of been business as usual. I'd say the impact on us has been de minimis.

Why do you think the business has been able to continue when, from an outside perspective, it kind of seems like an industry that has a lot of things going against it?

Well, film (fading) didn't hurt us at all, that was probably a blessing. And again the smartphones — point-and-shoot sales are a relatively small portion of our sales. I think with digital, the number of people who've gotten interested in photography in a more serious way has grown. Our potential market is substantially more than it was before digital. You can do a lot more with digital.

This interview has been edited and condensed for clarity and brevity.