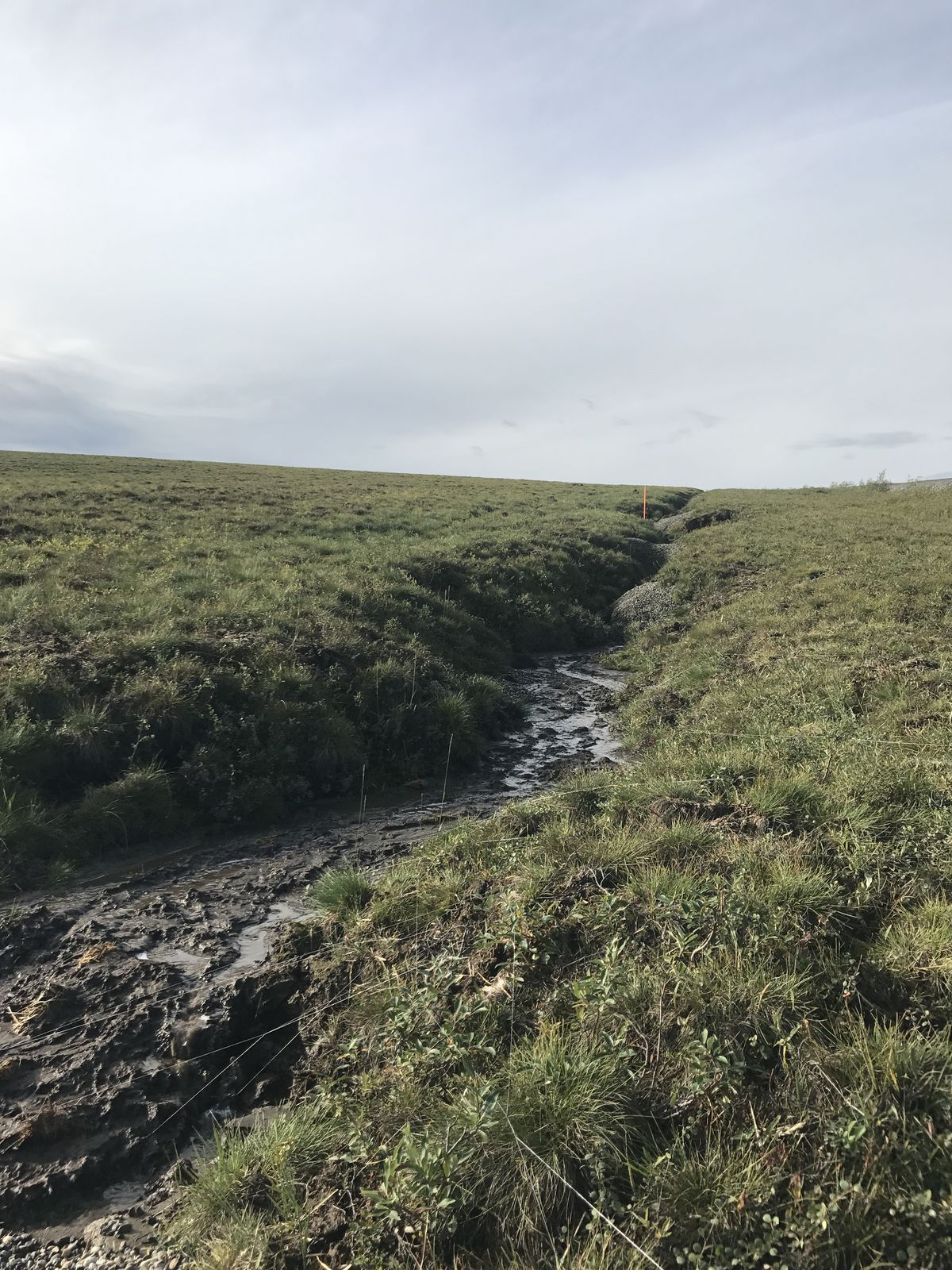 Erosion has plagued stretches of cable installed alongside the Dalton Highway for two companies, GCI and Quintillion. This section is near Mile 350 of the highway, about 60 miles south of where it ends at Prudhoe Bay. (Alaska Department of Environmental Conservation)

Erosion has plagued stretches of cable installed alongside the Dalton Highway for two companies, GCI and Quintillion. This section is near Mile 350 of the highway, about 60 miles south of where it ends at Prudhoe Bay. (Alaska Department of Environmental Conservation)

A pair of state workers are inspecting two 240-mile stretches of fiber-optic cable in northern Alaska for environmental damage after complaints that the cable installations were botched.

The cables run alongside the Dalton Highway, the haul road used to access Alaska's North Slope oil fields. They're separate projects — one was done for telecommunications giant GCI, and a second used by a newer company, Quintillion.

State environmental regulators allege the cable installation violated the terms of their permits by failing to stop erosion and diversion of stormwater. That's resulted in sinkholes and disturbed permafrost, according to notices mailed in October to three contractors that worked on the projects.

The Alaska district of the U.S. Army Corps of Engineers has also issued "notice of noncompliance letters" to Quintillion and GCI, said spokesman John Budnik. And in April, Quintillion sued a GCI subsidiary and contractor, saying the installation of GCI's cable damaged Quintillion's project.

The Alaska Department of Environmental Conservation employees on the scene this week will help the state determine the extent of the problem and how soon it can be fixed, said Andrew Sayers-Fay, the director of the department's water division. The companies think they can finish their work on the project before winter, but the division is skeptical, Sayers-Fay said in a phone interview.

"There are at least some areas that seem like the damage is pretty significant," he said. "That's really what we're going to learn from this inspections — this sense of, where are we headed?"

GCI says the damage is limited to a small portion of the installation and is the normal result of a big construction project. And it says less than 10 miles require restoration.

"GCI and our contractors are in the business of installing fiber, and so we always plan for contingencies," said spokeswoman Heather Handyside. "We expect to achieve good results once this project is finally restored."

Quintillion, citing its lawsuit, declined to comment beyond a one-sentence statement emailed by spokesman Tim Woolston.

"As a company headquartered in Alaska, employing Alaskans from across the state, it is a priority of Quintillion to be good stewards of the land where we live and work," the statement said.

The two projects were done between 2015 and last year.

Quintillion was installing a cable that would connect Prudhoe Bay to Fairbanks, and the rest of the United States.

That cable connects to a separate underwater cable that reaches around Alaska's northwest coast and links to several coastal towns.

[Related: Inside Quintillion, the Alaska broadband company whose former CEO is charged with wire fraud]

GCI, meanwhile, already had one cable that reached the North Slope. The new one was a $44 million project to provide "redundancy," making the company's service more secure and reliable, Handyside said.

The state began getting complaints about the projects in the summer of 2016, according to Sayers-Fay. Regulators didn't visit the site until the next summer, after hearing more serious complaints about erosion and permafrost thawing.

The complaints in 2016 left little time to mobilize regulators to visit the project, given the environmental conservation department's staffing level and the cables' remote location, said Sayers-Fay, the state water division director.

One contractor has talked about there being 15 problem spots, according to Sayers-Fay.

But, Sayers-Fay added, he's not sure exactly how widespread the problem is. That question will be answered, in part, by the inspection his department is doing this week, he said.

Quintillion, the GCI subsidiary and two contractors submitted a restoration plan to the state transportation department in December; the department wouldn't immediately make the plan available.

Part of the state's inspection will assess the success of measures taken by the companies last year, Sayers-Fay said.

Any fines or penalties will be determined later, once the problem areas are stabilized, he said.