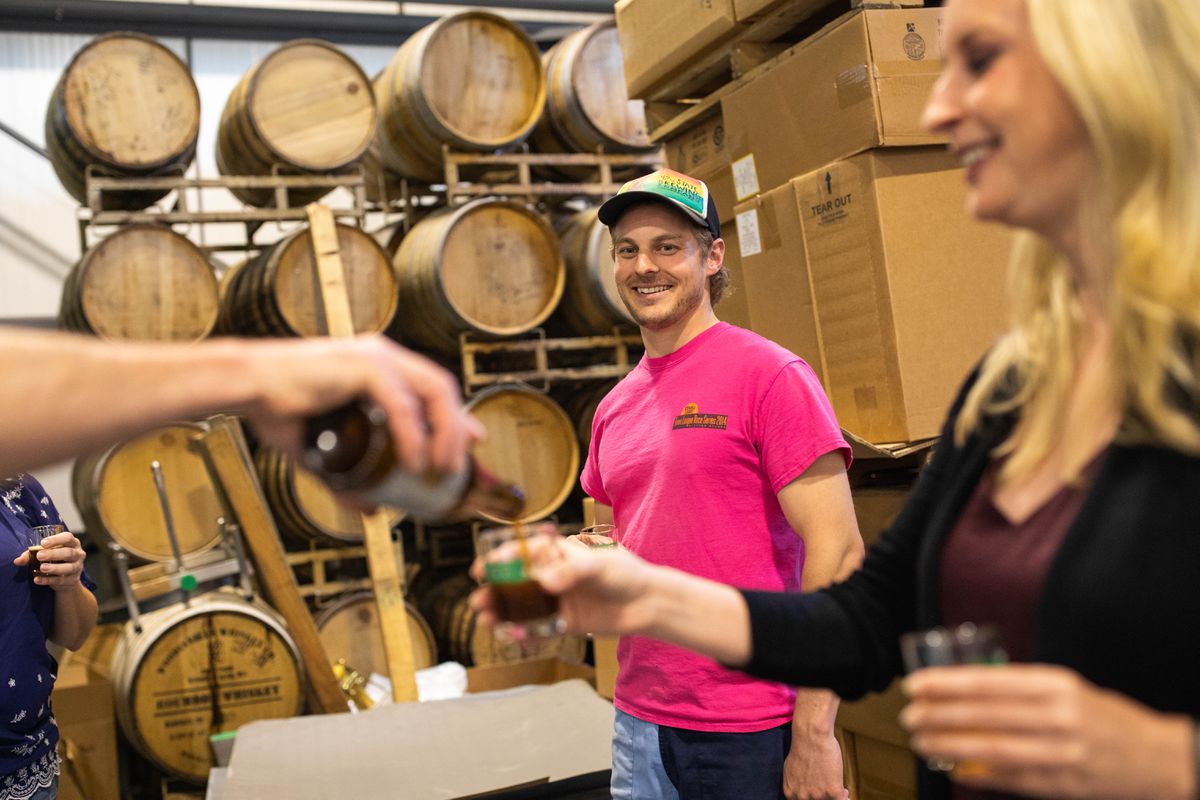 This is an installment of Shop Talk, an occasional series of interviews with business owners in Alaska, focusing on the state economy and how it is affecting them.

Alaska's craft beer industry has exploded over the last decade, and the state's current recession hasn't appeared to dampen that growth. An Anchorage business called Big Swig Tours that started in 2014 has capitalized on that growth, ferrying small groups of passengers around to visit breweries in Anchorage by van, and beyond by rail.

Big Swig Tours takes people behind the scenes to learn about the process of brewing beer. Owner Bryan Caenepeel, who's originally from North Carolina, works with four breweries in Anchorage — Midnight Sun Brewing Co., King Street Brewing Co., Resolution Brewing Co. and Cynosure Brewing — plus others north and south of the Anchorage Bowl. Those breweries also get a fee from the tours.

At Cynosure this week, amid the peak summer season, Caenepeel talked to the Anchorage Daily News about his business finding a niche in tourism and beer.

Caenepeel: The craft beer industry in our state has just kind of exploded really in the last, I would say, four years or so. I started my company in 2014. And in 2015 we saw a big surge in Alaska craft breweries. … The steam is just there and it's happening and everyone keeps talking about a bubble, like when is the market saturated. …

When I designed this business, I never wanted it to be a bar crawl where I just drop people off at a taproom and they consume beer and then move on to the next stop. I wanted to get more out of the tour for the guests.

ADN: Tell me a little bit about what made you want to start the company.

I came up here for my first summer in 2005, worked in tourism up here. I was a guide on the Alaska Railroad, and really just fell in love with the state. What kept me here is the winters, I love to ski. And back then we used to get proper winters here in Alaska. Fell in love with the culture of Alaska, the seasons, the dynamics. …

I love the feel of coming to a foreign place and getting the feeling of the place through the craft beer scene. … So in 2014, I was thinking about ways I could potentially start a business. … I had experience in the tourism industry, loved craft beer and saw this model of beer tours working in other cities, and I thought, Anchorage could use a beer tour to really get visitors and locals out of kind of what I call the "beaten tourist path" of gift shops and restaurants and really give them a way to experience a real local feel.

[This Alaska industry is booming in spite of the recession]

You were saying people think there might be a craft beer bubble — I think it's interesting craft beer is doing so well right now because it is more expensive, usually. What are your thoughts on that and how has the state recession affected you?

I feel really fortunate because I work in tourism and craft beer. My business bridges two industries that are actually really healthy in our state.

I think people are just more conscious about where they're spending their dollars. Alaska's been always great like this. … Craft beer just happens to be a popular thing now. … All the breweries I go to are either starved for space, or they're expanding, or new ones are opening.

How do you sell this to people?

I don't invest a lot of money in marketing, honestly. Reviews, whether they be on Google, social media, TripAdvisor, Yelp. So I can honestly say word-of-mouth has really been my biggest kind of springboard. … Beer is becoming more and more a part of people's radar when they visit a place.

(One of the tours) is $109, for a four-hour tour. You're visiting three breweries, all your transportation is included, food is included. We usually get a sample flight at every brewery. …

(At) $109 — you start getting Ubers from downtown, take an Uber to King Street, take an Uber there, buy your beer — you're easily at $100. And then with my more expensive tours, the day tours, they include the Alaska Railroad, which is not cheap. … It's about the travel experience, visiting with the people who are making this beer.

I was going to ask if you have to deal with drunk people a lot.

I'm proud of this, I've never had a puker, ever. … The picture I really like to paint is, this isn't a bar crawl. This is more about enjoying beer, learning about beer. And really enjoying the environment of a brewery.

This interview has been edited and condensed for clarity and brevity.