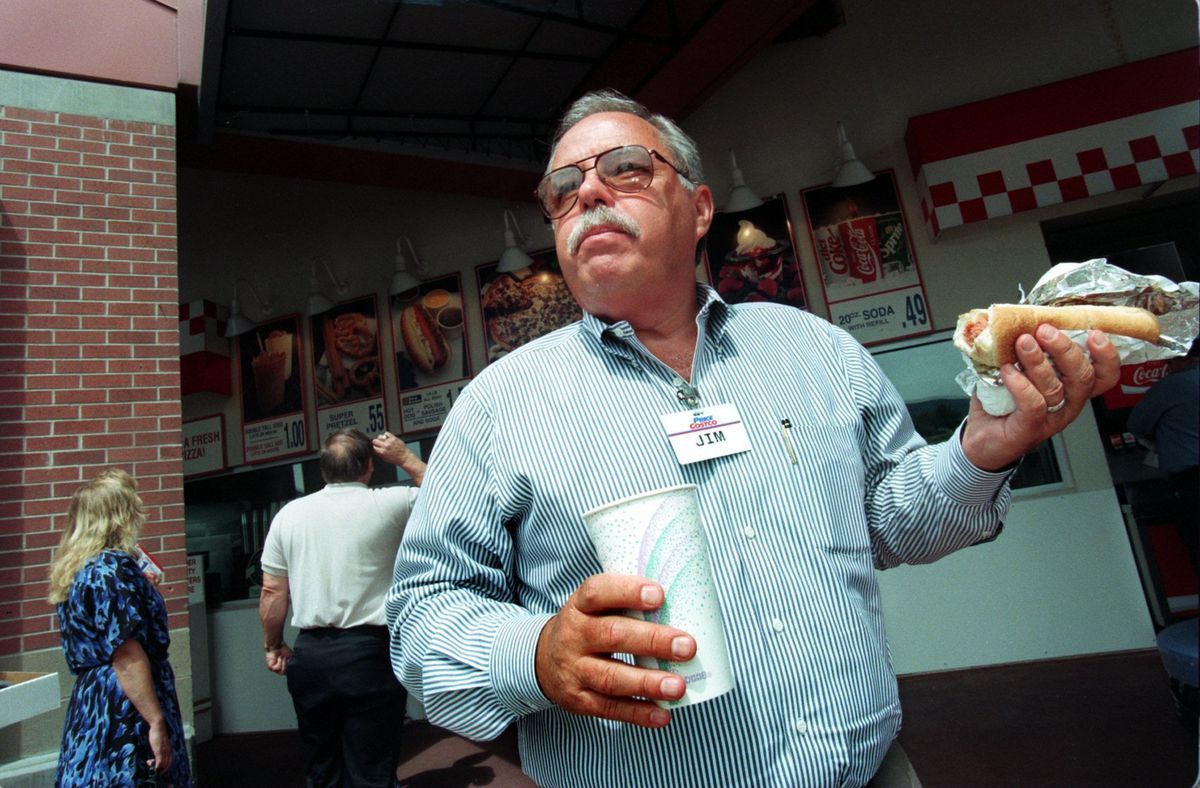 Jim Sinegal, co-founder and former CEO of Costco, with one of the retail giant's signature deals, a hot dog and drink for $1.50, in June 1997. (Rod Mar/Seattle Times/TNS)

Jim Sinegal, co-founder and former CEO of Costco, with one of the retail giant's signature deals, a hot dog and drink for $1.50, in June 1997. (Rod Mar/Seattle Times/TNS)

SEATTLE — With digital pitchforks in hand and sauerkraut on their minds, Polish hot dog fans took to social media to implore Costco to restore the recently nixed menu item. But don’t get your hopes up.

A deluge of broken heart and hot dog emojis, childhood memories, pleas for leniency, threats to cancel Costco memberships and outright anger has poured forth from Polish dog partisans in the week since The Seattle Times confirmed the menu change, which happened more than a year ago at some locations. Other customers complained about the replacement of chocolate soft serve, and Costco’s new acai bowls giving other acai bowls “a bad name.”

My entire childhood is eating a polish hot dog after shopping at Costco. And not to mention y'all took off the berry sundae and added an açai bowl. You also took off the chocolate ice cream and only have vanilla and this vanilla açai swirl. Genuinely mad. #SaveThePolishDog

Petition campaigns to #SaveThePolishDog have been launched at Care2 (tagged under “Corporate Accountability”) and Change.org.

Some Costco store employees are questioning the decision. A Costco member reports from the Roseville, Calif., store that the Polish remains on the menu by way of a paper label stuck to the sign for the all-beef hot dogs reading "and Polish." It wasn't clear where the store was getting its supply; Costco does sell the Polish dogs in bulk.

A manager confided to this member that the removal of the Polish option makes no sense given that it requires the same equipment as the regular dog.

“It doesn’t impact the operations,” the Costco member said, relaying his conversation with the manager. “And she was frustrated by the fact that the other new products” — acai bowls, an “Al Pastor” meatless salad, and hamburgers — “take a lot of room.”

Costco chief financial officer Richard Galanti, who confirmed the menu changes in response to questions from The Times last week, said Wednesday the reaction was "amazing."

While the Polish is getting the love, the regular dog gets the dollars — actually, the $1.50, with a drink. “Its sales were always dwarfed by the hot dog itself,” Galanti said, adding, “I don’t think there’s any plans to change what we’re doing currently in terms of bringing it back.”

He did say he was making calls to look into it further. We'll update this story if we hear more.

Galanti pointed out that while a regular supermarket carries 40,000 to 50,000 different items, a Costco warehouse will have about 3,800 on a given day, from tires to mayonnaise to diamonds. "It's limited selection, high volume and all the efficiencies afforded that," he said.

Meanwhile, acai berry aficionados find fault with Costco’s version of the would-be health food — specifically, too much sugar. The berries are commonly served frozen and blended atop yogurt and alongside fresh fruit and granola. At $4.99 or about half the price of an acai bowl at fancier outlets, Costco’s bowl has the fruit and granola, but the acai comes in the form of a frozen puree with lots of extra sugar added.

Galanti was also inquiring after the acai bowls.

We did not attempt to ascertain the ingredients in the hot dogs.