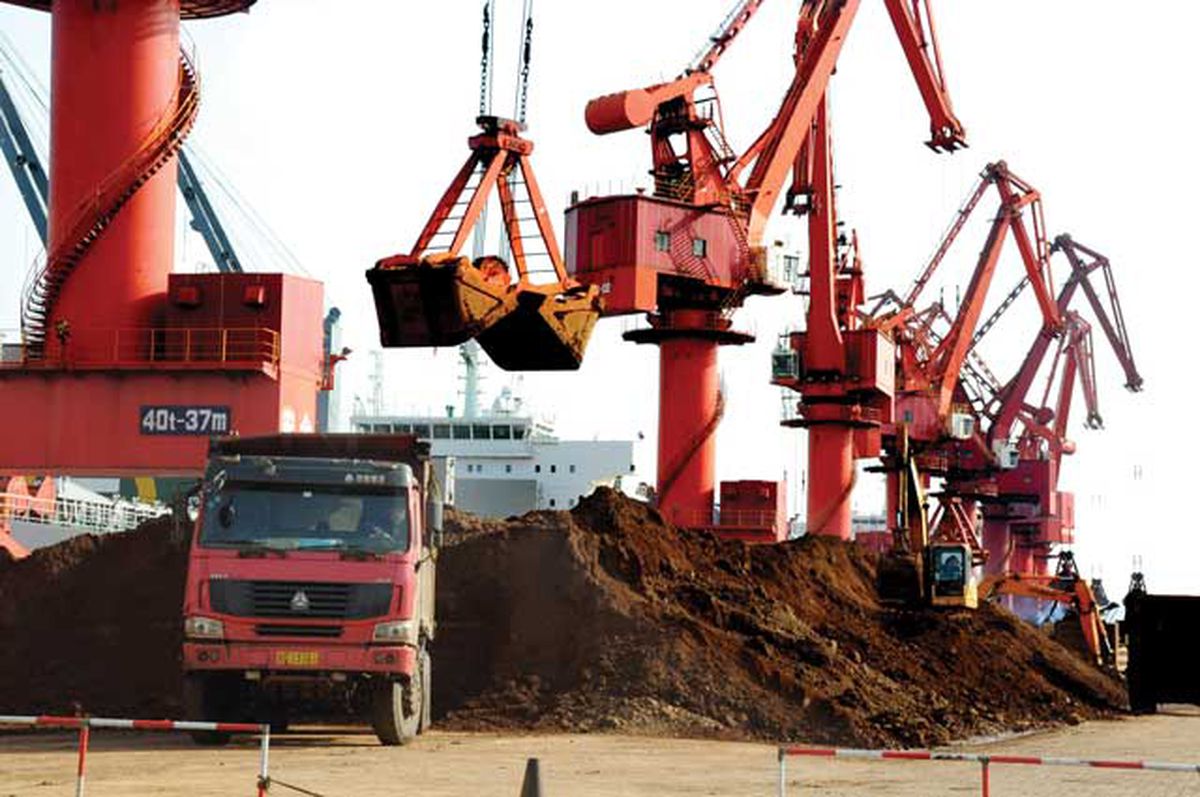 Excavators load rare earth elements onto trucks on a quay at the Port of Lianyungang, China, in November 2012. China controls 90 percent or more of the global supply of rare earths, which have a wide range of uses in high-tech sectors such as defense and renewable energy. Alaska has potential for domestic sources of rare earths, and the developers of a project on Prince of Wales Island are still advancing plans for production in Ketchikan. (Photo/Zhang Wei/AP)

Excavators load rare earth elements onto trucks on a quay at the Port of Lianyungang, China, in November 2012. China controls 90 percent or more of the global supply of rare earths, which have a wide range of uses in high-tech sectors such as defense and renewable energy. Alaska has potential for domestic sources of rare earths, and the developers of a project on Prince of Wales Island are still advancing plans for production in Ketchikan. (Photo/Zhang Wei/AP)

Many in Washington, D.C., particularly those in the Defense Department, see this as a major looming issue.

That's because the Mountain Pass mine just on the California side of the border with Nevada southwest of Las Vegas closed in 2015 when its operator went bankrupt. It was the last producing rare earths mine in the country.

The nation's supply of these 17 often hard-to-pronounce metals now comes from France, Estonia, Japan and China, according to the U.S. Geological Survey. Most troubling for some is the fact that China dominates the world's rare earth elements supply.

Sen. Lisa Murkowski remarked during a Senate Energy and Natural Resources Committee hearing she held July 17 on domestic mineral security that China has leveraged its dominance in rare earth production in the past and could do it again at a time when the country is in a tit-for-tat trade dispute with the U.S.

"My concern, among many concerns, is if China ultimately responds to tariffs by restricting our supply of rare earths, or any number of other minerals, the U.S. could be in serious trouble. We've heard testimony in the past about the dangers of the concentration of supply from a handful of countries that control the supply chain," said Murkowski, who chairs the Energy and Natural Resources Committee. "I'm hopeful that we aren't about to experience those dangers firsthand and will continue to urge action to reduce this significant vulnerability."

In 2010, China placed an embargo on all rare earths the country was exporting to Japan in retaliation for actions against the crew of a Chinese trawler Japanese officials contended was fishing illegally in the country's waters.

China's dominance in rare earth markets can make pricing and production data hard to obtain, but it is generally believed the country currently produces roughly 90 percent or more of the world's rare earths.

Murkowski also noted her state could go a long way toward alleviating the country's dependence on imported rare earth elements, and there is still movement toward development in Ketchikan by Nova Scotia-based Ucore.

In December President Donald Trump issued an executive order directing federal agencies to prioritize strategies to reduce U.S. dependence on imports of critical minerals. In May the Interior Department responded with a list of 35 minerals deemed "critical" for their economic importance which also have domestic supply vulnerabilities.

The entire rare earths group made the list along with other more common metals such as aluminum, tungsten, cobalt and others.

Rare earths are essential in the production of cell phones, hard drives, automobile catalytic converters and medical and military technologies.

USGS Alaska Research Geologist Doug Kreiner said in an interview that rare earths are so vital to modern-day products because there are no known substitutes.

Heavy rare earths — such as europium, terbium, and ytterbium with a greater atomic weight — are used in products that rely on high-temperature magnets. More common lighter rare earths are used in a plethora of applications including LED displays, according to Kreiner.

And demand for them will continue to grow as the world moves toward more hybrid and electric vehicles with high-performance lithium-ion batteries that also contain rare earths, he said.

As seems to be the case with most mineral commodities, Alaska holds its own rare earth resources.

The most notable deposit is the Bokan Mountain prospect that Nova Scotia-based Ucore Rare Metals Inc. explored until 2015. The prospect on southern Prince of Wales Island is approximately 40 percent heavy rare earths, according to Ucore, which are the hardest to come by. Overall, it holds roughly 5 million tons of ore with rare earth concentrations of 0.65 percent, according to the company.

Kreiner said rare earths occur across the state but the viability of mining them other places is largely unknown simply because they haven't been explored.

"Bokan Mountain is the only quote-unquote deposit in Alaska. So whether it's a deposit or an occurrence is really an economic definition. Basically, it becomes a deposit when it's concentrated to the point that it can be extracted," he said.

Ucore also holds rights to the Ruby rare earths prospect just north of the Yukon River in the Interior region along the Dalton Highway.

Kreiner said concentrations of rare earths aren't often related to deposits of other commonly mined metals, but they can at times be detected in precious metal ores.

The Ruby batholith is in the Ray Mountains, which has large sheets of loose sediments up to 325 feet thick that contain rare earths. Heavy minerals are more concentrated in lower terrain between the Ray Mountains and the Fort Hamlin Hills to the east, according to Ucore.

There are other potential rare earth belts extending from near Nome on the southern Seward Peninsula north and east to the southern flank of the Brooks Range as well as in the Porcupine River drainage of Northeast Alaska, Kreiner said.

Another large rare earth belt runs from the upper Tanana River west and south through the Alaska Range to the Kuskokwim River basin in Western Alaska.

"The hot spots that were identified in our analysis, whether or not they're prospective we really don't know because there just hasn't been a lot of work done out there," he said.

"Geologically speaking I think there are a lot of areas that are prospective for rare earths in the U.S. I think it's a matter of the geology and finding the systems that are economically exploitable."

Kreiner added that he attributes the lack of domestic rare earths production simply to the recent nature of their demand.

"Rare earth elements are a relatively new focus given the applications, particularly high-end technologies and medical science, defense mechanisms and the sort," he said.

A 2015 collapse in rare earth prices put Bokan Mountain exploration and development on hold, Ucore Vice President Randy MacGillivray said in an interview, but that hasn't stopped the company's work in Alaska.

Ucore has shifted its focus to developing a rare earths separation plant that the company plans to locate in Ketchikan.

"We know there's a qualified workforce in Ketchikan and we have a lot of Alaskan support, both from the state and federally, so honestly Ketchikan is a great choice for us on multiple levels," MacGillivray said.

Ucore's plan is to construct the metal refinement plant, estimated at $25 million, over the next couple years and get it up and running sometime in 2020.

Ketchikan's coastal location allows for easy transport of feedstock via shipping containers and further makes sense given its proximity to Bokan Mountain, according to MacGillivray.

"(The plant) will be a significant step forward to being able to ultimately build the mine on Prince of Wales Island because a segment of that construction would have already been financed and constructed; so it's an enhancement to the project for sure," he said.

In 2014 the Legislature authorized the Alaska Industrial Development and Export Authority to finance up to $145 million of the development costs at Bokan, which Ucore has pegged at about $220 million overall.

MacGillivray said AIDEA could be involved in financing the plant, which the company is calling its "specialty metals complex."

The company initially plans to start processing 1,000 to 2,000 tons of ore concentrate per year — eventually ramping up to double the processing quantities.

MacGillivray said the concentrate would likely be re-leached in Ketchikan before being subjected to molecular recognition separation technology at the facility.

The plant is likely to start with about 10 employees and the workforce could grow to about 25 as production grows.

Ucore leaders are currently in early-stage discussions with officials at mines that have byproduct ore containing rare earths but are focused on other metals as well as looking at direct sourcing options, he said.