FCC commissioner gets earful on internet service in Unalaska 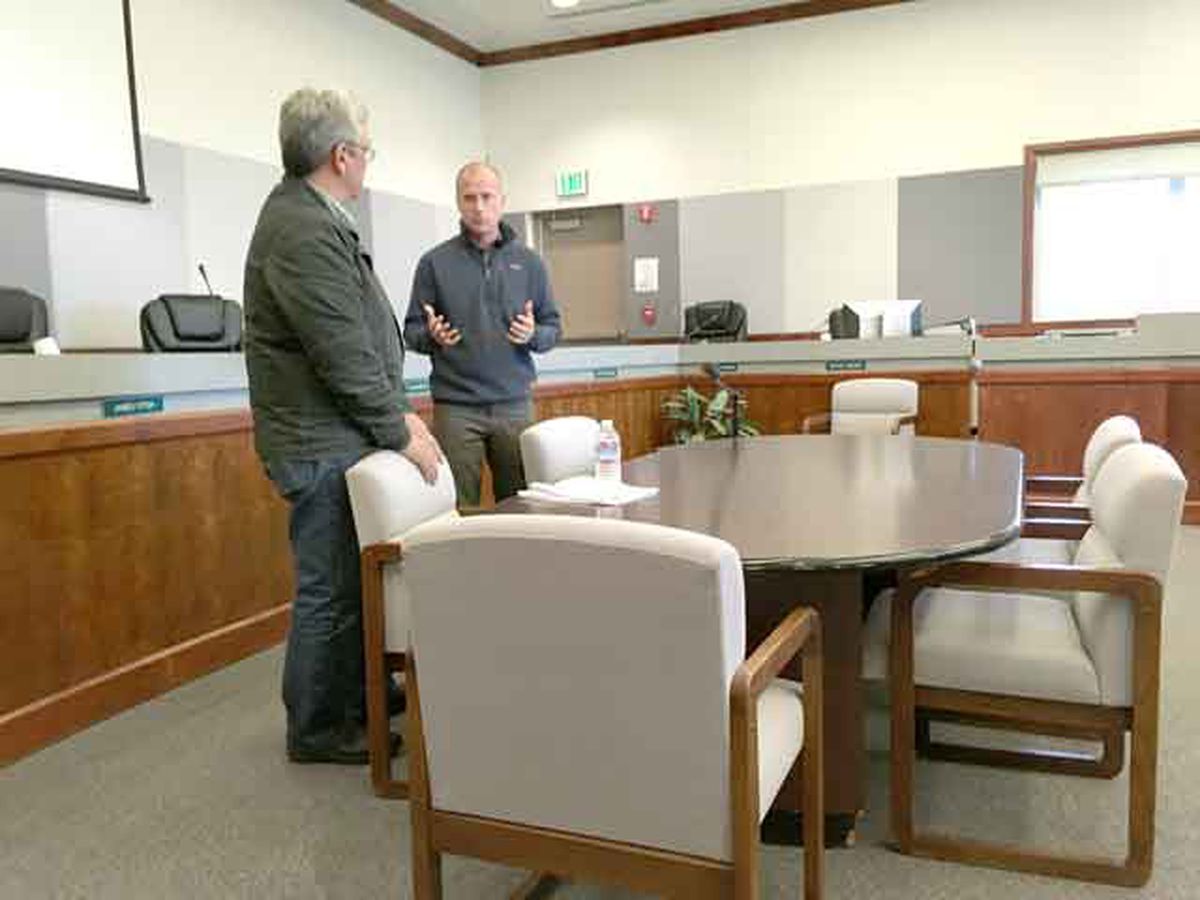 UNALASKA — Even with the present low level of service, the internet is critically important to commerce and medicine in the Aleutian Islands, and maybe even the military if conflict ever heats up with nuclear-armed North Korea.

War has struck the Aleutians before and it potentially could happen again, according to Unalaska residents who want the Department of Defense to step up to the plate and help fund improvements to the internet service in a remote yet strategically important location.

Help is on the way, he said, cautioning there's no "silver bullet."

"Broadband is critical" to the success of the fishing industry, he said. "This is a place that's on our radar. We have to do a better job," he told the crowd of about 40 at Unalaska City Hall.

The federal government plans to send more of the $10 billion Universal Service Fund to Alaska, he said, which includes the Rural Health Care Funding.

Vice Mayor Dennis Robinson said that even if a subsea fiberoptic cable finally brings fast internet to Unalaska, it it is still prone to disruption if the cable breaks along the rugged coast on the south side of the Alaska Peninsula, and asked a telecom executive in the audience about plans for "redundancy," or a backup system.

GCI Vice President Dan Boyette said the subsea fiberoptic cable is still at least two years away, and the company still hasn't committed to the project to connect the town from Kodiak. While land systems have more redundancy, that isn't available underwater, and the only backup is slow satellites, which he said his company will still maintain in addition to the underwater cable.

Subsea cables break once every seven years, on average, and Boyette said it usually takes a week for ship to arrive and repair the rupture, once the damage is located. Robinson said it could take over two weeks, between the time it takes a ship to arrive and then locate the problem.

Boyette said the south side route is advantageous because it is ice-free year round, easing vessel access. The company had previously considered a more economical route along the peninsula's north side, from Levelock.

Various commentators said they really didn't want to engage in any unnecessary "GCI bashing," but then proceeded to unload their frustrations. Optimera owner Emmitt Fitch said none of the complaints were coming from the customers of his start-up internet business.

Carr said the FCC is working to increase broadband capability through regulatory reform to allow a network of thousands of low-orbiting satellites, plus wide distribution of small backpack-size antennas on buildings and utility poles supplementing the existing 200-foot towers.

Local business officials complained about the difficulties with local cell phone service. Mike Lloyd said the what while the price of cell phone service has dropped, the greater availability of low cost plans make it hard to make calls. When the busy fishing season ends, and most workers go home, it's a lot easier to get through, he said.

Before GCI introduced economical plans making cellphones more affordable, Lloyd said he spent between $1,500 and $4,000 monthly on phone calls, when he worked for his former employer, Samson Tug and Barge.

Lloyd estimated that lousy cell service has cost his shipping logistics business between $100,000 and $150,000 in lost business in the last five years.

Unalaska Harbor Officer Tim Mahoney said cellphones were barely functional during a recent tsunami alert, when the community scrambled to high ground, producing "gridlock" on the network and a "perfect storm" of cellular dysfunction.

"In an emergency we're at our worse. We have no connectivity. Everything's jammed up," Mahoney said. No giant waves appeared, and the alert was eventually canceled.

Unalaska Librarian Karen Kresh said the internet is so slow that at times it's "almost unusable" at the public library where customers need it for online classes and job applications, adding that internet costs make up about 25 percent of the library's operating budget.

Alyssa MacDonald of Mac Enterprises said her office staff wastes about 25 percent of daily work time waiting for the internet to load, and otherwise struggling with the poor service, "stifling our growth."

"It would definitely be a game changer for us," if fast internet arrived, said Unalaska City School District Superintendent John Conwell. He complained of a lack of access to federal internet funds because of the school system's low enrollment and high income levels in the nearly full-employment industrial fishing port. He said grants should be awarded based on the unique needs of individual sites.

"We need connectivity to be able to reach the East Coast without your call being dropped 57 times," said local resident Lori Gregory. She cited the area's military importance, past and present, from World War II to today given the Aleutian archipelago's proximity to Asia and simmering international hostilities.

Carr said rural America suffers even in the Lower 48 from slow internet speeds. He mentioned farmers in Indiana, with great amounts of their own digitized agriculture data, stored on thumb drives, sitting uselessly in coffee cups, as weak connectivity blocks access to "the cloud," or offsite data processing locations.

Carr visited Alyeska Seafoods, the school and clinic and historic sites during his tour of Unalaska.

Carr said he visited Alaska at the prompting of Alaska Sens. Dan Sullivan and Lisa Murkowski. He planned to visit Barrow and Wainwright on the Arctic Ocean on Thursday and return to the southwest on Aug. 10 for a visit to Dillingham.

Jim Paulin can be reached at morsepond@yahoo.com.