After big-name departures, the former Sears mall gets an overhaul 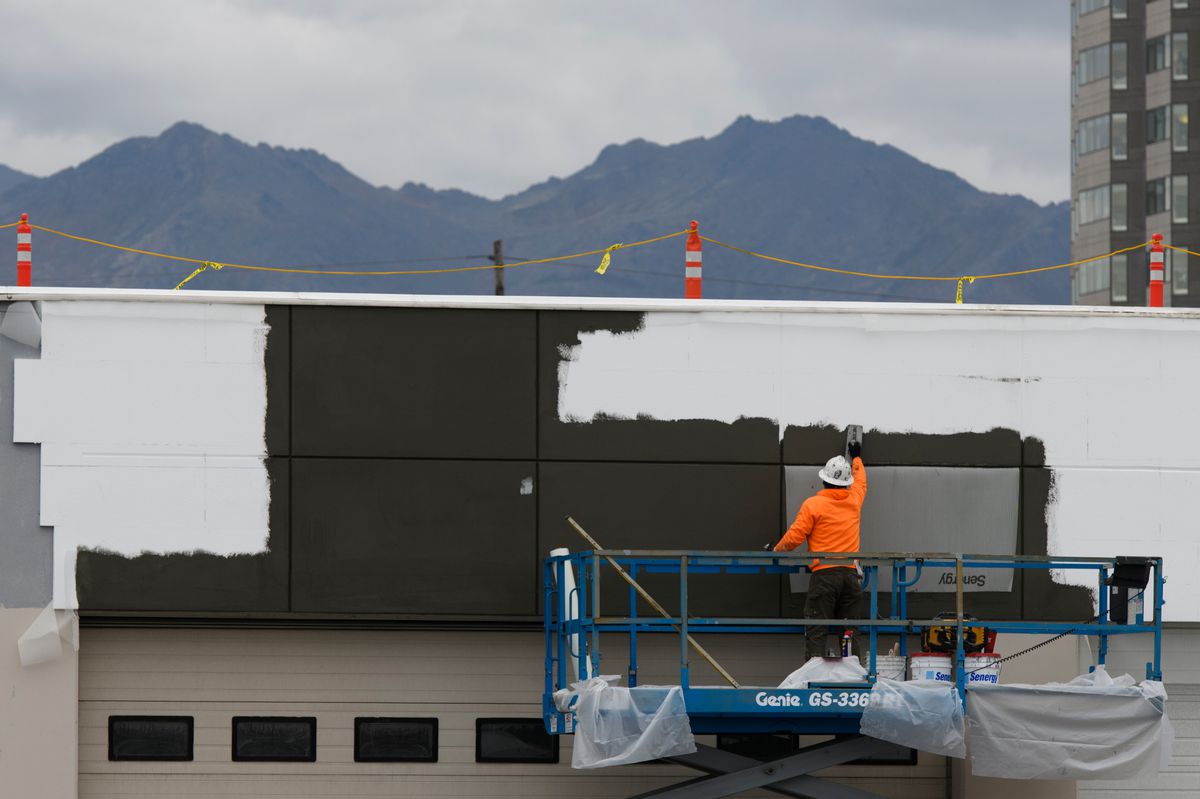 Randy Scott, of J&V Drywall and Plaster works on the exterior of the Midtown Mall on October 2, 2018. (Marc Lester / ADN)

Randy Scott, of J&V Drywall and Plaster works on the exterior of the Midtown Mall on October 2, 2018. (Marc Lester / ADN)

Maraya Davis owns two shops in what used to be called The Mall at Sears with her husband, where they sell clothing and gifts. She was worried when the Carrs Safeway grocery there closed three years ago.

Then, earlier this year, Sears announced it would close its location at the Anchorage mall. It was one of the biggest tenants.

It could have been a sign of serious decline for the 50-year-old indoor shopping center, now called the Midtown Mall. In Anchorage and elsewhere, malls have struggled in an era when brick-and-mortar retailers must contend with e-commerce. There's even a website, deadmalls.com, about that decline of indoor shopping centers across America.

But then, this summer, REI announced its plans to move in, bringing a huge amount of foot traffic with it. And other new stores are on the way, too.

"I was doing the happy dance," Davis said. She and her husband operate Poppy Lane Boutique and Lemon Tree.

Tenants say the mall is primed to succeed for one big reason: Location. It also has a mix of tenants that compete well in the online retail era, said Linda Boggs, a marketing consultant for the mall.

"It really is just the best location for retail in Anchorage," she said. "If it wasn't for great location, it may have kind of fallen on the wayside."

Major renovations are now underway. Drive by the mall, down Benson Boulevard near the corner at Seward Highway, or down Northern Lights Boulevard on the other side, and you'll see fences and new construction at both ends of the compact shopping center.

In addition to REI, a new Carrs Safeway, Guitar Center, and Planet Fitness are set to open at the mall in 2019. REI's departure will also mean a change for its current spot in Spenard, where it's an anchor alongside hip restaurants, a beer and wine shop, and others.

The Midtown Mall's location has the highest annual average daily traffic counts in Anchorage, according to a leasing brochure. That plus having plenty of service-oriented tenants has been key to its survival, Boggs said.

A number of the tenants in the Midtown Mall offer food or services — a hair salon, an eyebrow salon, BurgerFi, a SteamDot coffee shop, a food court where you can find pho, Thai dishes and more. Boggs refers to which businesses have survived as the "natural selection" of retail.

"We used to have record stores," she said. "You can't get your hair cut, can't get your nails done online. Personal services and food are still things that are very, very strong, and you need to go there."

[It's official: Outdoor retailer REI is moving to the former Sears mall]

Dick Stallone owns men's clothing store Stallone's in the mall. It's one of the oldest tenants. The anchor store closures have hurt, he said, as fewer people walk through, but he hopes that in a year business will have picked up again.

His shop has been in the mall since 1988 and has survived economic downturns by relying on a solid customer base, he said. Stacks of crisp button-down shirts line the walls, near a case of silky ties arranged by color.

"It's hard to try clothes on if you're ordering online," he said.

Davis, at Poppy Lane Boutique and Lemon Tree, used to work at the Sears store in the shopping center when the mall "was hopping" in the 1990s.

She attributes her shops' survival now in part to the farmer's market that's there Wednesdays through Saturdays. If not for that, she's not sure if they'd still be there.

She also travels throughout the year to bring back clothing, accessories, and gifts that people can't find elsewhere in town. Her main demographic is women across a wide age range.

"Even if the demographic from REI is more outdoorsy people, you're going to have more foot traffic," she said.

With Alaska's dark, cold winters, people still want to be able to stop at one place to shop inside, Boggs said.

The Midtown Mall isn't sprawling. It has an advantage in that most of it is only one story, said Cindy Prewett, manager at the Regis Salon there. That makes it accessible to more people, she added.

REI's arrival will be significant because of how much traffic it gets on its own, Boggs said. In a news release in July, the co-op cited more parking and better access to the Seward Highway as reasons for the move from its Spenard spot.

"Bringing in strong anchors … that's going to have a lot of repeat traffic. When people are there to visit those anchor stores, hope is they'll visit the smaller stores as well," Boggs said. "The whole business model behind the shopping center is, the bread and butter is the smaller tenants that are around the anchors."

Tyler Robinson, vice president of community development, real estate and planning at Cook Inlet Housing Authority, said he'll keep going to the Northern Lights Center mall but with REI's move, he'll shop at the Midtown Mall now, too — a spot he said he didn't have much reason to visit before.

"I think it will be felt," he said. "I think people in the neighborhood are bummed. At the same time, I think there's businesses (at Northern Lights Center) that have a strong following there that will be fine."

At Title Wave Books, also in the Northern Lights Center strip mall, owner Angela Libal doesn't think REI's departure will be much of a detriment to business.

"We've seen it undergo change and transformation and this is just another change along the way," she said of the strip mall. "While we share some customer base, I believe that there is just a unique draw for Title Wave that, not every customer that is coming to Title Wave would go to REI, or vice versa."

People are spending less time in malls than they used to, Boggs said. But it's still easier for a store to exist in a mall than as a standalone retailer, said Davis. She and her husband had a standalone store a few years ago, and it was a "disaster," she said.

"When you're a standalone store, have to drive traffic yourself," she said. "Standalone stores are great if you have time, patience, money to wait for customers to come to you."