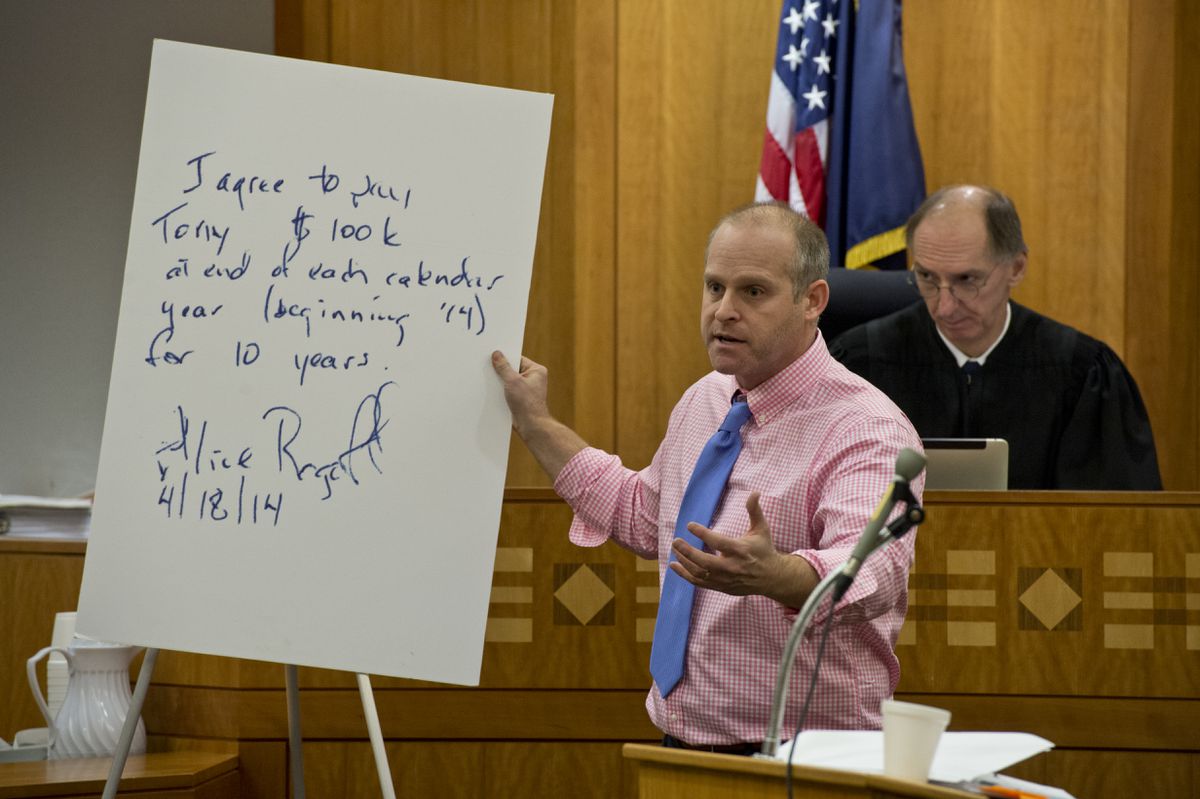 A jury decided in favor of a former Alaska Dispatch News editor and president in a civil case that centered on a statement written years ago on a cocktail napkin.

A question central to the court battle was whether the statement on the napkin was enforceable. The jury unanimously found that, while it didn’t technically amount to a contract, it was an enforceable promise.

“I think what it does is, it sends a message where there are certain circumstances where justice requires that promises be enforced,” said Jeffrey Robinson, an attorney representing Hopfinger. “That’s what the jury’s verdict represents more than anything. That even if it didn’t technically qualify as a contract, that it certainly should be given full force and effect based on the circumstances in which the parties acted if there was a contract.”

An attorney for Rogoff did not immediately return a message and email seeking comment. Hopfinger also declined to comment Thursday afternoon.

Jurors deliberated for about nine hours between Wednesday and Thursday, Robinson said. One claim Hopfinger did not win was a $77,000 claim for severance.

During the trial, the opposing sides also disputed what the payments referred to on the napkin were for. Robinson argued that Hopfinger was owed the money as a buyout of his shares in the company. David Gross, an attorney for Rogoff, argued that the 10-year term on the napkin was “to commit Tony to work for the newspaper" for that 10-year period. He also said in the trial that Hopfinger deserved “nothing" in the case.

The jury found that “the actual promise was for his shares,” Robinson said Thursday afternoon.

In 2008, Hopfinger co-founded a news website, Alaska Dispatch, with his then-wife, Amanda Coyne. The next year, Rogoff bought a majority of Alaska Dispatch Publishing LLC.

Alaska Dispatch bought the Anchorage Daily News, a much larger operation, in 2014 from the McClatchy Co., and the name of the merged organization became Alaska Dispatch News.

Alaska Dispatch News filed for Chapter 11 bankruptcy protection in August of 2017. In bankruptcy court, the Binkley family of Fairbanks bought the news operation through a business called Binkley Co., and the name changed back to Anchorage Daily News shortly after.

Hopfinger now lives in the Chicago area and has not worked for the newspaper in years. Rogoff said during the trial that she has a house in Anchorage and that Alaska will continue to be her home.

The trial started Nov. 14, and attorneys gave their closing statements on Wednesday.