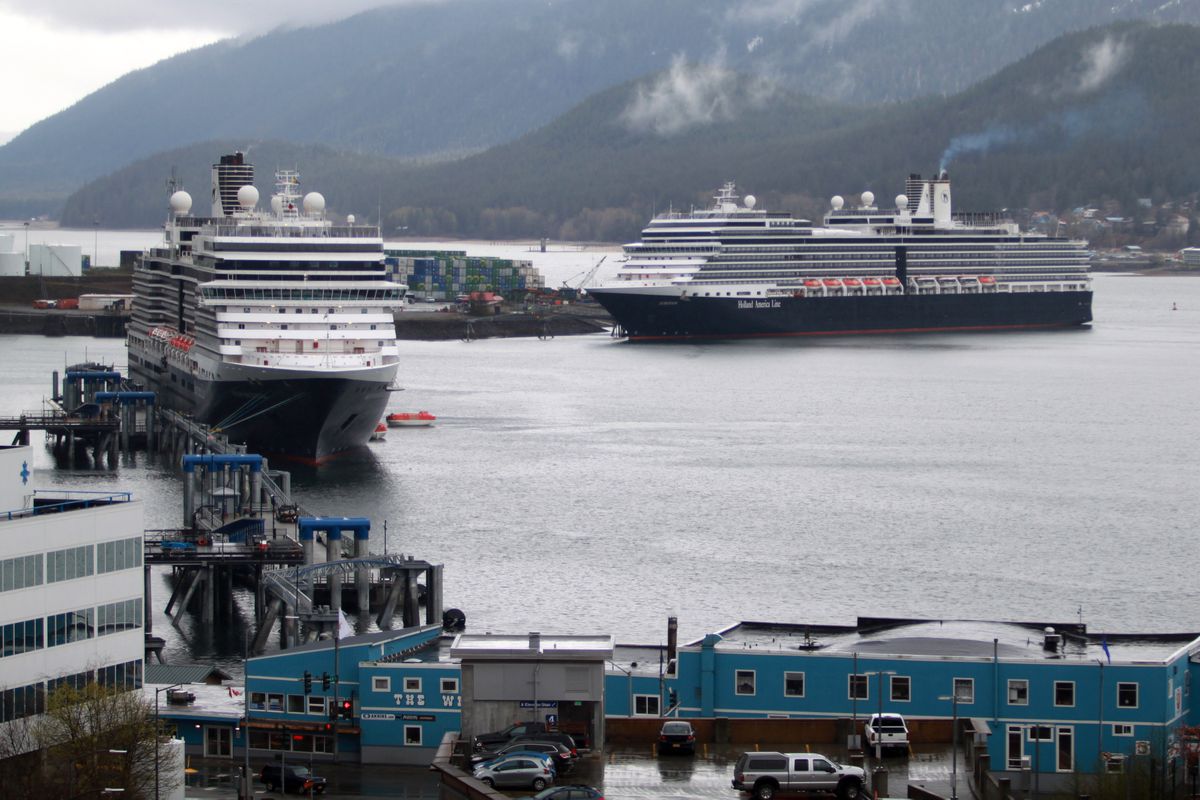 Holland America's Nieuw Amsterdam and Eurodam arrive in port on May 1, 2017, pictured here from the fifth floor of the Alaska Capitol in Juneau. (Nathaniel Herz / ADN archive)

Holland America's Nieuw Amsterdam and Eurodam arrive in port on May 1, 2017, pictured here from the fifth floor of the Alaska Capitol in Juneau. (Nathaniel Herz / ADN archive)

JUNEAU — A U.S. District Court judge has ruled that per-passenger cruise ship fees levied by the City and Borough of Juneau are legal, but they must be spent to the benefit of the ships, not passengers.

The decision Thursday by Judge H. Russel Holland in Anchorage may end a 2 1/2-year-old legal dispute between the Cruise Lines International Association and the City and Borough of Juneau, which has spent hundreds of thousands of dollars defending itself in court.

The case has significant implications for cities across Alaska that levy their own per-passenger fees in addition to the head tax levied by the state and redistributed to communities. In Juneau, local fees are projected to generate $8.34 million in the current fiscal year. It is not yet clear what impact the decision will have on the city’s finances.

“We certainly have lots of things we would like to spend the fees on, and we’re going to be very carefully parsing every word in the 35-page order before we make any decisions on any further expenditure,” Juneau City Manager Rorie Watt said by phone Thursday.

John Binkley, president of CLIA’s Alaska chapter, said he hasn’t read the decision yet but has talked with CLIA’s attorneys about it.

“We’re pleased with the ruling,” he said from a helicopter en route to Fairbanks.

Watt said the Juneau Assembly will meet in executive session Monday to discuss the ruling and whether to pursue the case further.

In the meantime, the city will determine how to translate Holland’s ruling into new limits.

After being told about Watt’s comments, Binkley said, “That’s really what we wanted all along.”

CLIA did not seek repayment of past fees; both Binkley and Watt called it a “forward-looking” situation.

The case hinged on an interpretation of the U.S. Constitution’s tonnage clause, which states in part that “No State shall, without the Consent of Congress, lay any Duty of Tonnage."

Since 2000, Juneau has charged a fee of $5 per passenger on cruise ships that dock in its ports.

Previous examples of how the city has used those funds include increased ambulance service and hospital staffing needed to serve more than 1 million passengers per year, the costs of operating a public restroom, and improvements to city facilities in order to make them aesthetically pleasing to visitors.

The city levies a separate $3 per-passenger fee to cover “capital improvements to the downtown waterfront for the provision of service to the cruise ship industry.”

In April 2016, the Cruise Lines International Association and its Alaska chapter sued, arguing that Juneau’s fees violated the tonnage clause. The suit was prompted at least in part by the city’s Seawalk project, which involved the construction of an artificial island and a park to host a life-size statue of a humpback whale. (The whale itself was purchased with public donations.)

"And so while we’re not opposed to paying taxes, we feel that proposed island and the foundation for the whale sculpture is beyond what those funds should be used for. We’re just trying to get guidance from the court,” Binkley told public radio station KTOO in 2016.

Interpreting the tonnage clause, Holland said the fees must be used to benefit ships, not passengers.

Both sides sought summary judgment rather than going to trial.