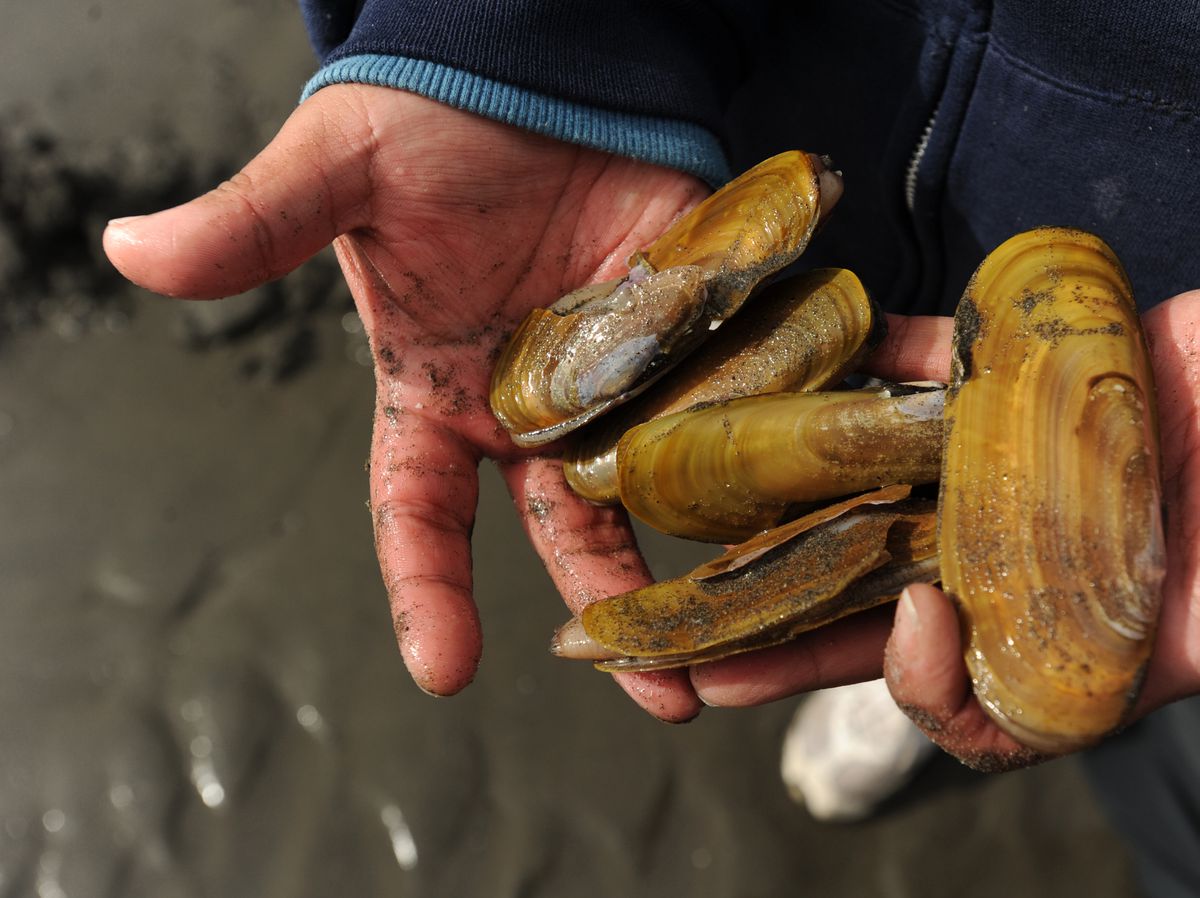 Razor clams at Clam Gulch on the Kenai Peninsula on May 14, 2010. (Bob Hallinen / ADN archive)

Razor clams at Clam Gulch on the Kenai Peninsula on May 14, 2010. (Bob Hallinen / ADN archive)

Using robots and bioengineered bacteria to refurbish old fishing boats took top honors at the recent Ocean Technology Innovation Sprint (OTIS) at the Loussac Library in Anchorage. The Google-inspired sprint concept, hosted by the Alaska Ocean Cluster, brings entrepreneurs together to create prototype solutions to challenges of their choice within a set time.

Team King came up with a FishStat Alaska Wet Ruler, a phone app that manages fishing licenses and regulations, identifies fish and more.

“It measures your catch, records where you caught it — it’s an alternative to traditional methods and makes it quick and easy in the field,” said Meg Pritchard, marketing and communications manager for the Alaska Ocean Cluster.

The fan favorite was Team Sockeye’s Happy Clam Portable PSP Tester. Just swab the shellfish with a test strip and the kit tells if it is safe to eat.

The Alaska Ocean Cluster is modeled after a program that began decades ago in Iceland to connect entrepreneurs, academia and businesses and bring blue economy ideas to fruition.

“For people who want to keep going we have other programs, like our Blue Pipeline Initiative and our scale accelerator that takes viable business ideas and helps them scale up,” Pritchard said.

The Cluster also hosts Ocean Tuesdays, a weekly webinar platform open to all to exchange blue economy ideas in Alaska and globally.

The Alaska Ocean Cluster is funded by the Bering Sea Fishermen’s Association in partnership with the University of Alaska’s Economic Development and Business Enterprise Institute.

The Joint Board of Fisheries and Game is recruiting nominees for commissioner of the Alaska Department of Fish and Game through Dec. 14. Contact Glenn Haight at glenn.haight@alaska.gov or 907-465-4110. Meanwhile, Gov. Mike Dunleavy has appointed Doug Vincent-Lang as acting fish and game commissioner. He has over 30 years’ experience in wildlife research and management and as a sportfish research biologist.

It’s months away, but plans already are underway for the third Bristol Bay Fish Expo on June 9 and 10 in Naknek.

Naknek swells from about 400 to 12,000 people as the world’s biggest sockeye fishery gets underway each summer, and it’s the hub for 10 major processors and a fleet of nearly 1,000 boats.

Bringing the industry and community together is a main impetus for the event; the bigger goal is to raise money for Little Angels Childcare Academy.

“We are so fortunate because unlike many nonprofits that are always concerned about income, thanks to the Fish Expo we are doing very well,” said Katie Copps, event co-organizer, adding that after expenses, about $35,000 was raised for child care last year.

One of the biggest money makers and fan favorites is a fashion show that includes wearable art. (A brailer bag ball gown by Nomar of Homer stole the show last year.) The fashions and hundreds more donated items are sold at live and silent auctions.

Last year 56 exhibitors were on the show floor, and Copps said room is being made for more, along with added food booths.

Donations for the fashion show, auction and sponsors are being accepted now. Early sign-ups can choose their space from a floor plan at bristolbayfishexpo.com.

An Alaska sisterhood of sorts is advancing a line of tundra botanicals mixed with the sea to create potent anti-aging skin care products bearing the best of both.

A wild salmon Skin Serum is the first wellness product Salmon Sisters has added to its popular line, which features original designs on clothing and other ocean-themed goods.

“We love how smooth and light it feels. There are beautiful notes of crowberries, which we picked throughout our childhood on the tundra behind our homestead to make jam and pies. It doesn’t smell fishy, but the salmon oil gives it a silkiness that feels very nostalgic of Alaskan summers at fish camp,” said Salmon Sisters' Emma Teal Laukitis.

She and sister Claire Neaton of Homer have become two of Alaska’s most well-known seafood industry ambassadors with features in Vogue, a Microsoft television ad, Forbes’ 30 under 30 list, and their now-famous legacy designs on Xtratuf boots.

The crowberries in the serum are gathered from the tundra by the Sparck triplets, along with fireweed and Arctic sage (or “Ciaggluk,” meaning “nothing bad about it,”) said Michelle (Macuarr’uq) of Chevak, who — along with Cika (Ji-kah) and Amy (Kelama) — operates ArXotica. Along with their own Quyung-lii brand, the Sparck sisters are producing the Skin Serum for Salmon Sisters.

ArXotica has gained fame since 2006 for its “Tundra Loving Care” products that “harness the unparalleled properties of extreme environment flora to create a super status skin care line.”

“Right now we are working with the Salmon Sisters’ vision, and they are very good at design and packaging and marketing. We are hoping they will add their own magic touch to their skin care line,” said Michelle Sparck.

“We love ArXotica products because they are made with ingredients unique to our state with a rich history of wellness and healing,” said Laukitis.

“It’s for men’s beards. There’s no seal in it, but we’re playing on an item that people still eat out in Western Alaska,” Sparck said.