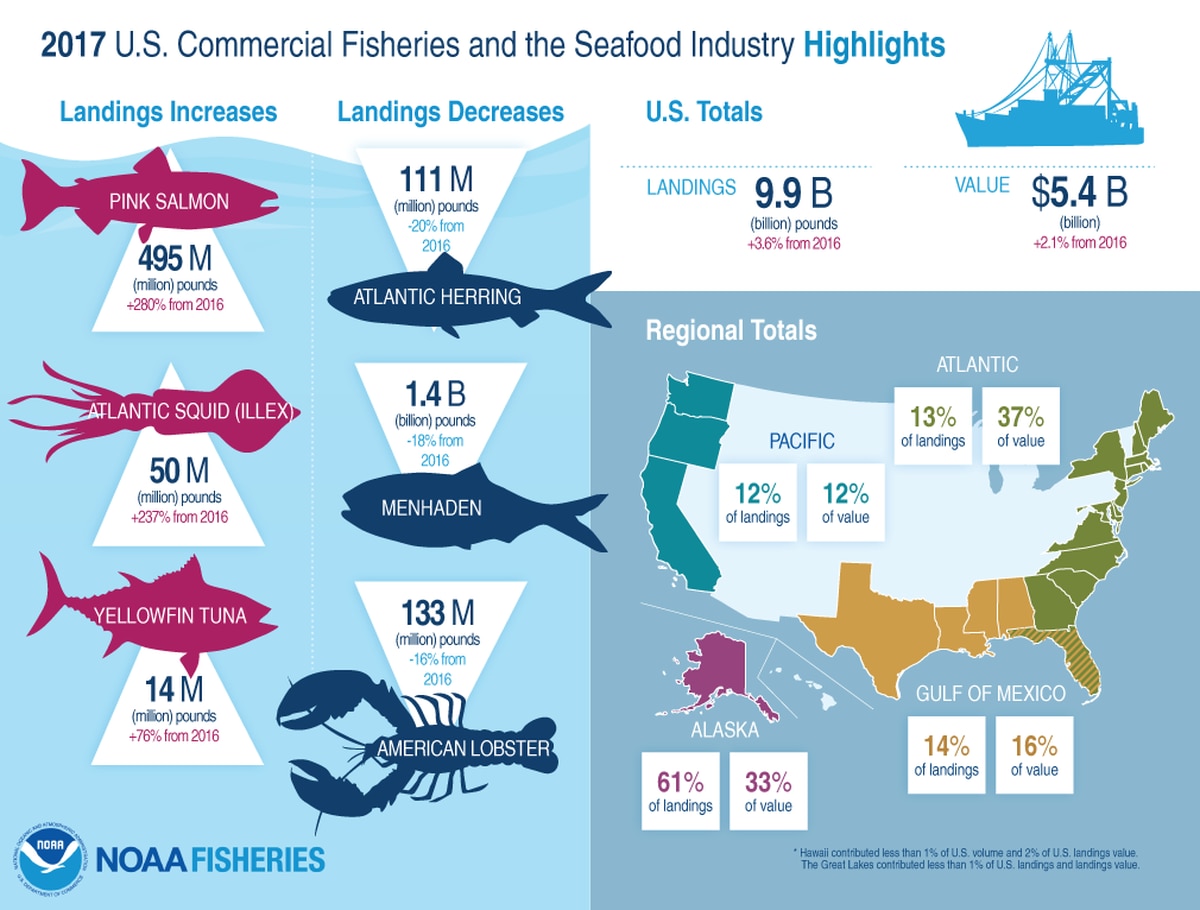 Alaska is the nation’s superpower when it comes to seafood.

American fishermen landed just shy of 10 billion pounds of fish and shellfish last year valued at $5.4 billion, both up slightly from 2016. Of that, Alaska accounted for 61 percent of total landings (6 billion pounds) and 33 percent of the value ($1.8 billion).

That’s according to the 2017 Fisheries of the US Report released by NOAA Fisheries, which covers all U.S. regions and species, recreational fishing, aquaculture, trade and more. The annual report also includes the top 50 U.S. ports for seafood landings and values, and once again, Alaska dominated the list.

“The Alaska port of Dutch Harbor led the nation with the highest amount of seafood landings — 769 million pounds valued at $173 million — for the 21st year in a row,” Ned Cyr, NOAA director of science and technology, said at a media teleconference. “New Bedford, Massachusetts, had the highest value catch for the 18th year in a row — 111 million pounds valued at $389 million with 80 percent coming from the highly lucrative sea scallop fishery.”

The Aleutian Islands ranked second for seafood landings thanks to Trident’s plant at Akutan, the nation’s largest seafood processing facility. Kodiak bumped up a notch from fourth to third place. The Alaska Peninsula ranked seventh, and Naknek came in at No. 9.

Alaska ports rounding out the top 20 were Cordova, Sitka, Ketchikan and Petersburg. In all, 13 Alaskan fishing communities ranked among the top 50 list of U.S. ports for seafood landings.

The report also highlights the growing role for aquaculture in the domestic seafood industry. U.S. marine and fresh water aquaculture was valued at $1.5 billion in 2016, equal to about 21 percent of the value of the nation’s combined seafood production, with oysters, clams and salmon generating the highest value.

The U.S. still imports over 80 percent of its seafood, and federal overseers are intent upon turning that tide.

“The Department of Commerce and NOAA are committed to addressing the U.S. seafood trade deficit through regulatory streamlining, increasing aquaculture production and creating a better, fairer trading system for all Americans,” Cyr said.

Nearly 6 billion pounds of fish and shellfish were imported to the U.S. last year, up 1.6 percent, valued at $21.5 billion, a 10.4 percent increase from 2016. Shrimp, salmon and tuna continued to top the list of imports.

In other report highlights:

• Alaska pollock accounted for 28 percent of all fish landed in the U.S. and 17 percent of the value.

• Alaska accounted for nearly 98 percent of the nation’s salmon landings.

• The average dock price paid to U.S. fishermen last year across the board held at 55 cents per pound.

• Sport fish enthusiasts made 202 million salt water fishing trips last year with striped bass and blue fish being the biggest catches. Only 2 percent of the anglers went to the Pacific coast. Alaska data were not available for 2017.

• The U.S. seafood industry’s contribution to the economy increased slightly, according to an accompanying fisheries economic report for 2016. Commercial fisheries generated $53 billion in sales, supported 711,000 jobs and added $28 billion to the nation’s GDP, all up by 2 percent.

Americans ate more seafood in 2017, reaching the highest level since 2008. Per capita consumption was 16 pounds, an increase of 1.1 pounds from the year before. That’s according to the top 10 list of favorites compiled each year by the National Fisheries Institute and based on data from the NOAA fisheries report.

Shrimp remained at the top of the list of favorites with Americans eating 4.4 pounds per person last year. Salmon ranked second at 2.4 pounds followed by canned tuna, at 2.1 pounds.

Rounding out the top 10 were pollock, tilapia, catfish, crab, cod, clams and pangasius.

Cod catches will decline next year in both the Gulf of Alaska and Bering Sea, while catches for pollock will be up in the Bering Sea and down in the Gulf. The 2019 numbers were set this month by the North Pacific Fishery Management Council for over two dozen fisheries in federal waters from 3 to 200 miles offshore.

The Bering Sea pollock catch got a 2.4 percent increase to nearly 1.4 million metric tons, or more than 3 billion pounds.

Gulf of Alaska cod catches will again take a dip to just over 27 million pounds — down 5.6 percent.

Meanwhile, boats are still out on the water throughout the Gulf of Alaska and Bering Sea hauling up final catches of various groundfish for the year.

The 4-million-pound red king crab fishery at Bristol Bay is a wrap, but crabbers are still tapping away at the 2.4-million-pound Bering Sea Tanner crab quota. Snow crab is open but fishing typically gets going in mid-January.

Divers are picking up the last 35,000 pounds of sea cucumbers in parts of Southeast Alaska. About 170 divers competed for a 1.7-million-pound sea cucumber quota this year; diving also continues for more than 700,000 pounds of giant geoduck clams.

Southeast trollers are still out on the water targeting winter king salmon.

Looking ahead, there will be no king salmon catches allowed next year at the Stikine and Taku rivers due to low run forecasts.

A fishery for seven kinds of rockfish will open in Southeast on Jan. 5. The 55,000-pound quota can include yelloweye, quillback, canary, copper, China, tiger and rosethorn rockfish.

At the state’s largest roe herring fishery at Togiak, the harvest for next year will be 24,430 tons, a slight increase.

The year-round cycle of Alaska’s fishing industry will begin Jan. 1.