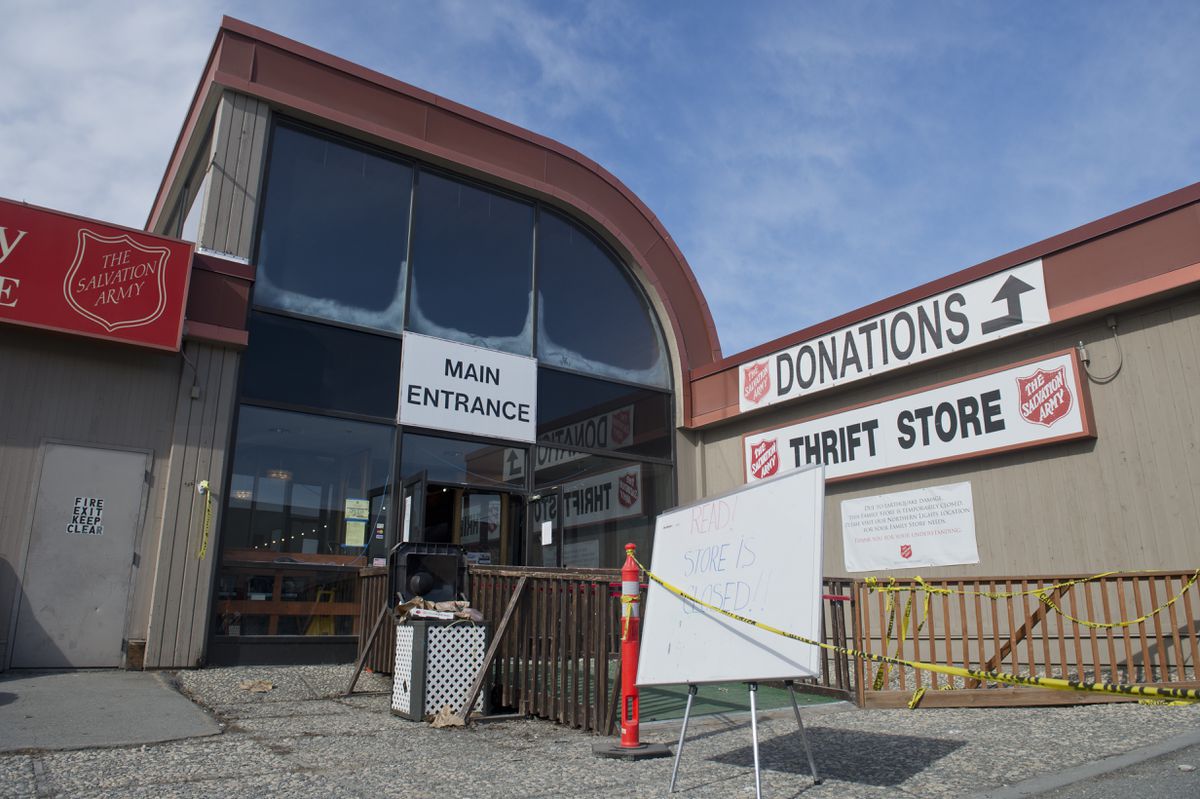 Work continues at the Salvation Army Family Store on April 2, 2019. The building was closed due to damage caused by the November 30, 2018, earthquake. (Marc Lester / ADN)

Work continues at the Salvation Army Family Store on April 2, 2019. The building was closed due to damage caused by the November 30, 2018, earthquake. (Marc Lester / ADN)

The Salvation Army thrift store in South Anchorage is still closed because of damage from the Nov. 30 Southcentral Alaska earthquake. Employees have been shuffled around to other locations, and it’s not clear yet exactly what the total cost of the repairs will be.

“It’s definitely taken a big bite out of some of the money we use for our other programs,” said Oscar Shaw IV, Salvation Army’s regional manager here.

More than four months after the 7.1-magnitude quake struck, some businesses scattered around Anchorage are still shuttered or temporarily relocated.

The Westmark Hotel in downtown has been closed since the earthquake to address structural damage and won’t reopen until April 29, a manager there said. Nonprofit group Cook Inlet Tribal Council’s employees have been splintered into three temporary locations while its building on San Jeronimo Drive undergoes repair.

In December, TV station KTVA had to relocate from its building at 1001 Northway Drive, just across the street from the Cook Inlet Tribal Council offices. The Northway building, formerly occupied by the Anchorage Daily News, suffered “extensive damage,” according to a report for the property filed with the city.

The foundation had moderate damage, as did roofs and floors. There were broken water lines, and drywall was destroyed in some places, the report said.

KTVA staff is now split up and operating in multiple buildings around town. At the temporary newsroom in a Midtown business park, "we are almost stacked on top of each other,” said news director Janis Harper. She expects the station will be able to move back into the Northway Drive building in April.

[For some Alaskans struggling with earthquake losses, recovery aid is falling short of expectations]

Alaska telecom giant GCI owns KTVA, and in addition to the station the company also has about 100 other employees who usually work in that Northway building. They, too, are still working at temporary locations.

“It’s been a bit of a challenge, I know, finding the space and getting people equipped with the technology and equipment they need to do their jobs,” said GCI spokeswoman Heather Handyside. “I think what we’ve tried to do is give people a safe, comfortable, temporary environment to work in."

It’s difficult to measure the scope of how many businesses in Anchorage are still physically disrupted because of quake damage. The municipality has a list of 10 commercial properties in Anchorage that were still red-tagged as of March 26, marking them as unsafe to occupy.

But those are only the businesses that have been in touch with the municipality to get an inspection. If a business had a non-city engineer inspect the property, it wouldn’t be on that list.

About 60 more commercial properties are yellow-tagged, said Bob Doehl, director of the municipality’s development services department. Those yellow tags means occupancy and use are restricted.

At the Cook Inlet Tribal Council building, water lines broke and there was water damage to much of the ceiling on multiple floors, according to a safety assessment filed with the city. There was damage to drywall, and to a corner of the building’s exterior.

The 258 people who usually work there are now split up into spaces on DeBarr Road, Bragaw Street, and in Midtown at the BP building.

The hardest part of the disruption has been losing regular interaction among staff and also the people who use CITC’s services, said president Gloria O’Neill.

“We really miss the connection because we are scattered across Anchorage," she said. She hopes CITC will be back in its offices by Dec. 1. The group is also using the repair time as an opportunity to make some changes in how the space is designed.

VIP Restaurant, a Korean eatery on Northern Lights Boulevard in the Valhalla Center strip mall, remains closed for repairs even as other businesses in that property have reopened. A fence was up around VIP on Thursday, and a sign near the door said "unsafe.”

The restaurant is expected to be open again within two weeks, according to Said Obeidi, whose family owns Valhalla Center.

At the Salvation Army on Dimond, people have dropped off donations even though the store is closed, Shaw said. He wants to direct that traffic to the locations that are still open, on Northern Lights Boulevard and in Wasilla.

“I know people are eager to get rid of stuff, it’s spring cleaning,” he said, “but outside the fence now it looks like a dump.”