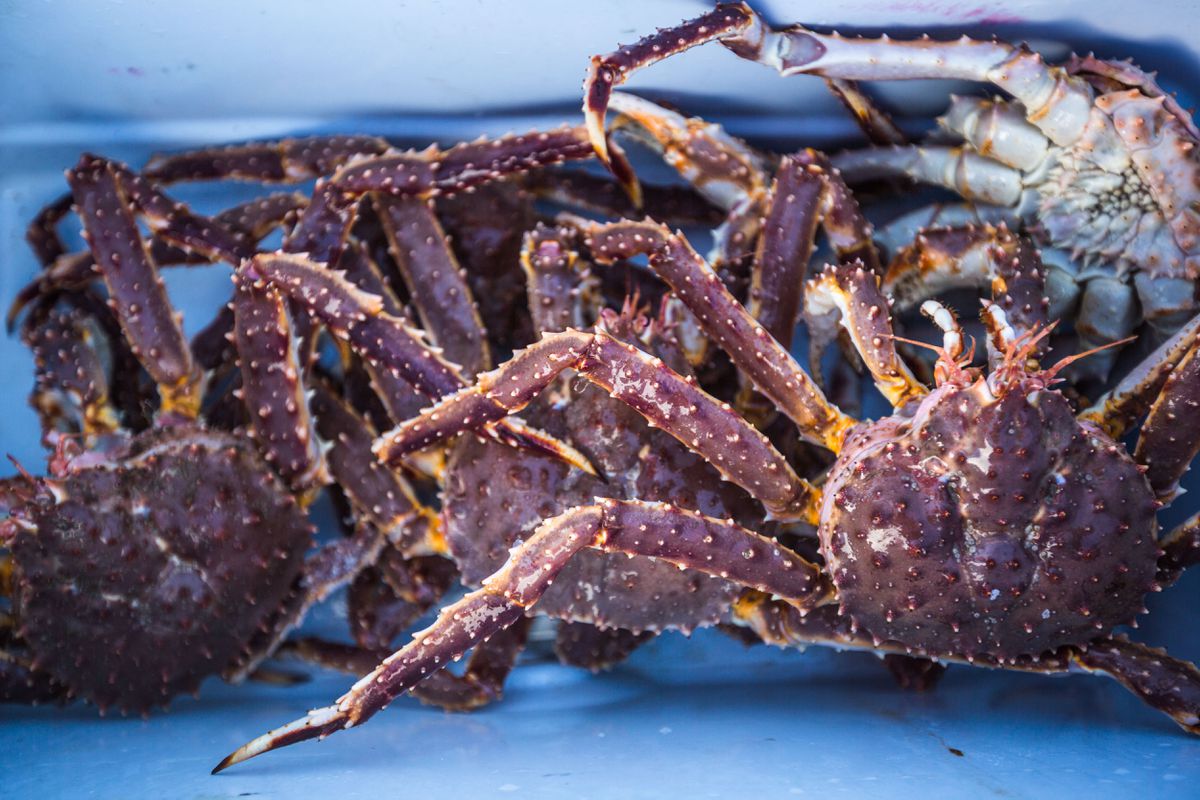 Bering Sea crabbers saw upticks in crab recruits during a good fishery for the 2018-19 season, along with strong prices.

The crab season opens in mid-October for red king crab, tanners and snow crab (opilio), and while fishing goes fast for red kings in order to fill orders for year-end markets in Japan, the fleet typically drops pots for the other species in January.

Crabbers said they saw strong showings of younger crab poised to enter the three fisheries. Only male crabs of a certain size can be retained for sale.

“For Bristol Bay red king crab, the reports were very positive,” said veteran crabber Jake Jacobsen, director of the Inter-Cooperative Exchange, which represents the majority of Bering Sea crabbers. “I got a lot of reports from people saying they saw a lot of recruitment around, a lot of females and small crab, but some boats didn’t see any. So it depended on where you were. Overall, the catch seemed to go pretty fast and the fishing was good. It wasn’t scratchy at all for most of the boats.”

Crabbers also saw good numbers of bairdi tanners, which had a harvest limit of 2.4 million pounds. Jacobsen said price negotiations are ongoing for tanners and their smaller cousin, snow crab.

“We should be close to record prices for opilio,” Jacobsen said.

The record snow crab price was $4.98 a pound, set in 2012; last season’s price was $4.04 per pound. Competing imports from Russia are up substantially, Jacobsen said, and they are trying to get rid of product held over from last season.

“That’s brought the price down, and I expect prices will start to climb again as people get a feel for availability of the resource and what the crab looks like,” he added.

Snow crab is a bright spot for the Bering Sea fleet. A catch of 27.5 million pounds this season was a 47 percent increase after the 2018 summer survey showed a 60 percent boost in market-sized males and nearly the same for females. Bob Foy, director of science and research for the National Oceanic and Atmospheric Administration, based at the Auke Bay lab in Juneau, called it “one of the largest snow crab recruitment events ever seen.” Jacobsen said that was consistent with what the crabbers saw on the fishing grounds. That has speculation running wild that the snow crab catch could double again for next season, but he added it’s best to wait and see.

“I’ve been in the business too long to get excited about that kind of news because I’ve heard it before. It all depends on the summer survey, and we’ve been trying to make some improvements in the stock assessment model. But it looks pretty positive,” he said. “What we’re looking for isn’t dramatic swings. We’d rather have a steady, fishable population, but with nature that’s not always possible. Crab are very cyclic in their population numbers.”

There’s been some tension between crabbers and managers in recent years over big differences in what crabbers are seeing on the fishing grounds and the numbers managers pull up in the summer trawl survey.

“Apparently, the crab go on vacation somewhere else in the summertime because they haven’t been showing up in the survey recently,” Jacobsen added with a laugh.

Last season the three Bering Sea crab fisheries were valued at $190 million for a fleet of about 85 boats.

The call is out for young Alaska fishermen who want training in career opportunities in fishery management, advocacy, research, marketing, conservation, business and much more.

The Young Fishing Fellows Program, now in its third year, is an initiative of the Alaska Marine Conservation Council. The program this year will include five mentor groups across the state.

“The Alaska Longline Fishermen’s Association in Sitka, the North Pacific Fisheries Association out of Homer, and the Alaska Fishermen’s Network is hosting a fellow of our own this year to help us out with the Young Fishermen’s Almanac,” said Jamie O’Connor, director of the Network which is an AMCC program. “Also, Koniag, the native group out of Kodiak, is doing a policy fellowship focused on fisheries access. And the N&N Cannery History Project is hosting a fellow and will focus on the history of canneries in Alaska and the folks who work in them.”

O’Connor, who got the job at AMCC after participating in the first Fellows cohort, said the fellowships are open to fishermen 35 and under who are paid from $16 to $26 an hour for their work, depending on their experience.

“It’s part time and usually ends up being about 10 hours a week for a few months in the winter. There’s a lot of flexibility built in so people can work around their winter schedule or jobs and, of course, the fishing seasons,” she said.

Past Fellows have gone to work as legislative aides in Washington, D.C., and as part of the North Pacific Fishery Management Council advisory panel. One is a subsistence fishing advocate; another is doing research at the Kachemak Bay National Estuarian Research Preserve on adaptability for fishing businesses in a changing climate.

“One of our mentors likes to say, ‘If you’re not at the table you’re on the menu,’ and these fellowships teach people like myself and the others how to effectively be at the table, whether it be regulatory or direct marketing or whatever young fishermen might need to diversify their business,” O’Connor said.

The fellowships begin this fall and the deadline to apply is May 26. The Young Fishing Fellows Program is funded by the National Fish and Wildlife Foundation and the Edgerton Foundation.

“We are hoping to have enough applications to get everybody matched up before I go fishing,” O’Connor said.

Alaska’s 2019 salmon season officially opens on May 16 with a 12-hour opener for sockeyes and king salmon at Copper River. Salmon openers in other Alaska regions will quickly follow.

Trollers in Southeast began targeting spring king salmon May 1. Some Southeast areas opened to beam trawlers for side stripe and pink shrimp on May 1, and a pot shrimp fishery opens May 15 with a catch of 39,500 pounds. Two areas remain open to golden king crab, and Panhandle divers continue going down for geoduck clams.

In Prince William Sound, a third opener for spot shrimp opens May 14 for a fleet of nearly 70 boats that are competing for a catch of 68,100 pounds. A sablefish season is underway in the Sound, with a 134,000-pound target. The recent tanner crab fishery in Prince William Sound produced nearly 125,000 pounds for 14 fishermen, who received $3.30 a pound.

A one-day-a-week bait herring fishery is open in upper Cook Inlet through May 31, and a small smelt (hooligan) fishery opened May 1. Clammers also are busy at Alaska’s only razor clam fishery at beaches on the west side of Cook Inlet, with a 400,000-pound limit.

A herring bait fishery is underway in the Unalakleet area, and Norton Sound Seafood Products plans to buy about 40 tons. There is over 6,000 tons for the herring quota this year, but no buyer interest for a roe fishery, which pays out much less than herring purchased for bait.

Halibut landings have crept up to about 4 million pounds, 6 million for sablefish. Fisheries for cod, pollock, flounder, other whitefish and more are ongoing throughout the Gulf of Alaska and Bering Sea.