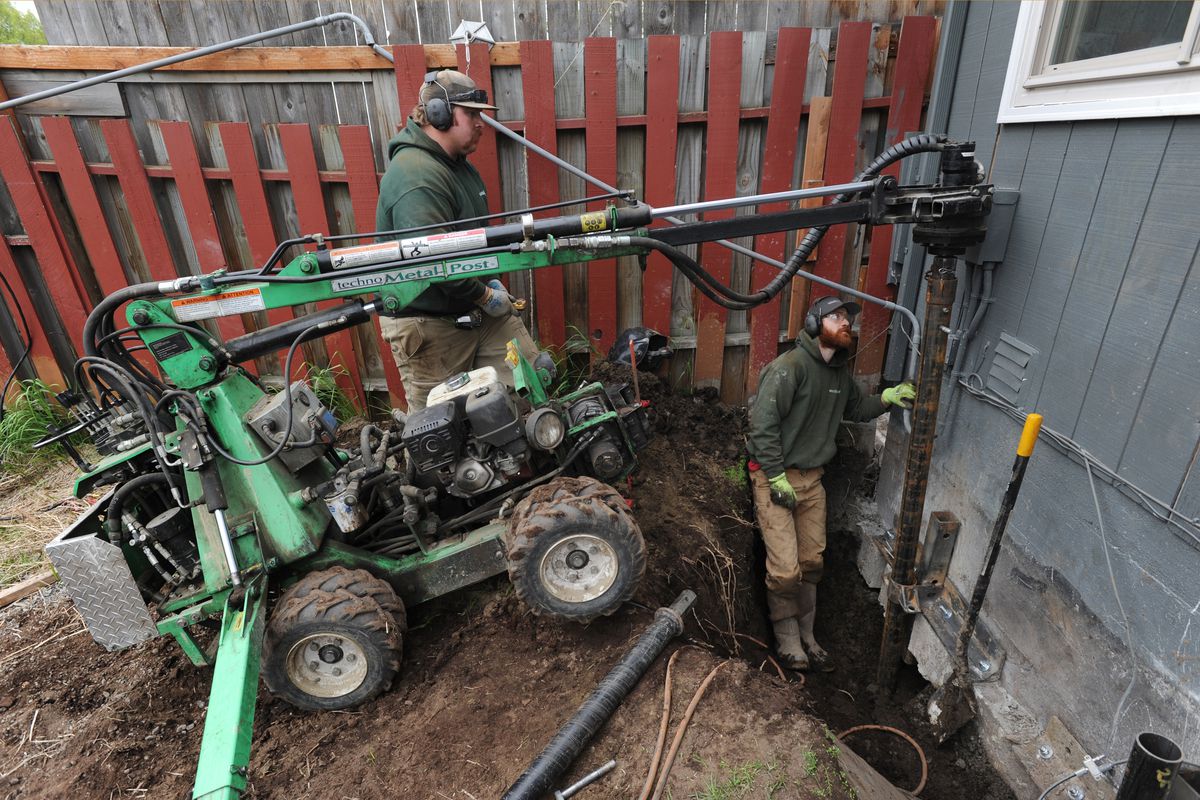 Jason Macrander and Tim Weise of Techno Metal Post Alaska install a helical pier while lifting and stabilizing an earthquake-damaged home in West Anchorage on Thursday, May 16, 2019. (Bill Roth / ADN)

Jason Macrander and Tim Weise of Techno Metal Post Alaska install a helical pier while lifting and stabilizing an earthquake-damaged home in West Anchorage on Thursday, May 16, 2019. (Bill Roth / ADN)

Brice Jones’ phone won’t stop ringing. The Anchorage drywall contractor was busy enough before the Nov. 30 earthquake, but now he doesn’t even have time to answer all the calls flooding in from people looking to get cracked walls fixed.

Some people tell him the work they need done is minor, and shouldn’t take long.

“They say it’ll only take a few days, as if I have a few days sitting around,” said Jones, owner of Extreme Drywall.

Nearly six months after the 7.1 earthquake struck Southcentral Alaska, homes and buildings around Anchorage and Eagle River still have cracked drywall, or, for some, more serious foundation problems. Contractors are scrambling to keep up with all the repairs, some already scheduling projects through the end of the year. The rush of work compounds a labor shortage some construction businesses say they were already dealing with before the quake hit. While homeowners are eager to get fixes, contractors urge people to thoroughly vet businesses they’re considering hiring.

In the days and weeks immediately after the earthquake, Jones dealt with commercial repairs. Businesses moved quickly to make sure patrons weren’t scared the ceiling was about to cave in on them.

More recently, residential business has “picked up big time,” he said. The homeowners who had waited to see if the Federal Emergency Management Agency would help cover repair costs are now trying to find contractors to hire.

Jones said he gets about 20 calls a day from people just looking for estimates, mostly for cosmetic damage. And he doesn’t even advertise.

“I think it’s gonna be crazy all through the summer and into the fall,” he said.

FEMA assistance initially fell short of what some people were hoping for, but the agency recently boosted payments. Still, many homeowners don’t have earthquake insurance because of how pricey the deductibles can be. As a result, some have held off on repairs.

He estimates that he’s looked at hundreds of potential jobs and landed maybe 10 percent of those.

“The shame of it is that the poor clients just don’t have the funds to make the repairs, which makes things even more difficult,” said Paul Michelsohn, owner of general contracting company Michelsohn and Daughter.

That combined with the wait time and emotional stress for clients has made the uptick in business difficult to deal with.

“It’s been a pain,” Michelsohn said.

Before the earthquake, Reed’s business would do five to seven estimates each week for potential clients. But after, that number “pretty much doubled,” he said.

“Everybody’s busy,” Reed said. Finding employees has been tough, he said, and when the rush of work started, "I was desperately trying to find helping hands, knowledgeable tradesmen.”

He’s not alone. In recent years, Anchorage’s construction industry has lost workers to places in the Lower 48 that are experiencing building booms. There are just fewer people available to do all the work, said Chuck Homan II, who owns general contracting business Homan Inc.

“It’s been busy, and the earthquake basically put more stress on the system,” he said.

Jones, at Extreme Drywall, said his calendar is full of earthquake repair jobs scheduled almost to Christmas. It’s not uncommon for him to have specific projects scheduled far in advance. What’s unusual is being fully scheduled for months, without openings for other work that comes up.

“Earthquake repairs, it’s not rocket science, but it’s not just filling a crack,” Jones said. “There’s a good-enough way and then the right way, I guess.”

Contractors caution people against going with quick solutions that might be cheaper. Michelsohn has seen some homes fixed in a “band-aid fashion." But sometimes the work that needs done just takes time.

And the more specialized that work is, the longer the wait. Techno Metal Post Alaska, a company that jacks up houses that have settled in order to level them again, has a backlog of projects. It takes several weeks for the company to even go look at a new potential project, and months to get it on the schedule, said owner Dave Northup.

“It’s a very specialized thing and there’s just not a lot of people that do it in the state,” he said. Now that FEMA has increased payments to homeowners seeking aid, he’s hearing from more potential clients. One day this past week he got five calls from people with significant damage to their homes.

Michelsohn’s company has about eight houses with earthquake damage to work on, but he’s waiting in line for Techno Metal Post Alaska’s services. He hasn’t even started on the first house yet.

“This work is probably going to last a year,” he said. Reed thinks it will last maybe even two years.

Robb Blake owns a home in an Eagle River cul-de-sac where he said he’s the only one who had earthquake insurance. He called Homan, who he’s friends with, the Monday after the quake to inquire about repairs. Blake and his wife moved out of their house two weeks ago so workers could get started, and the project is supposed to be done in the third week of July.

His neighbors are still waiting for their contractors to get to them.