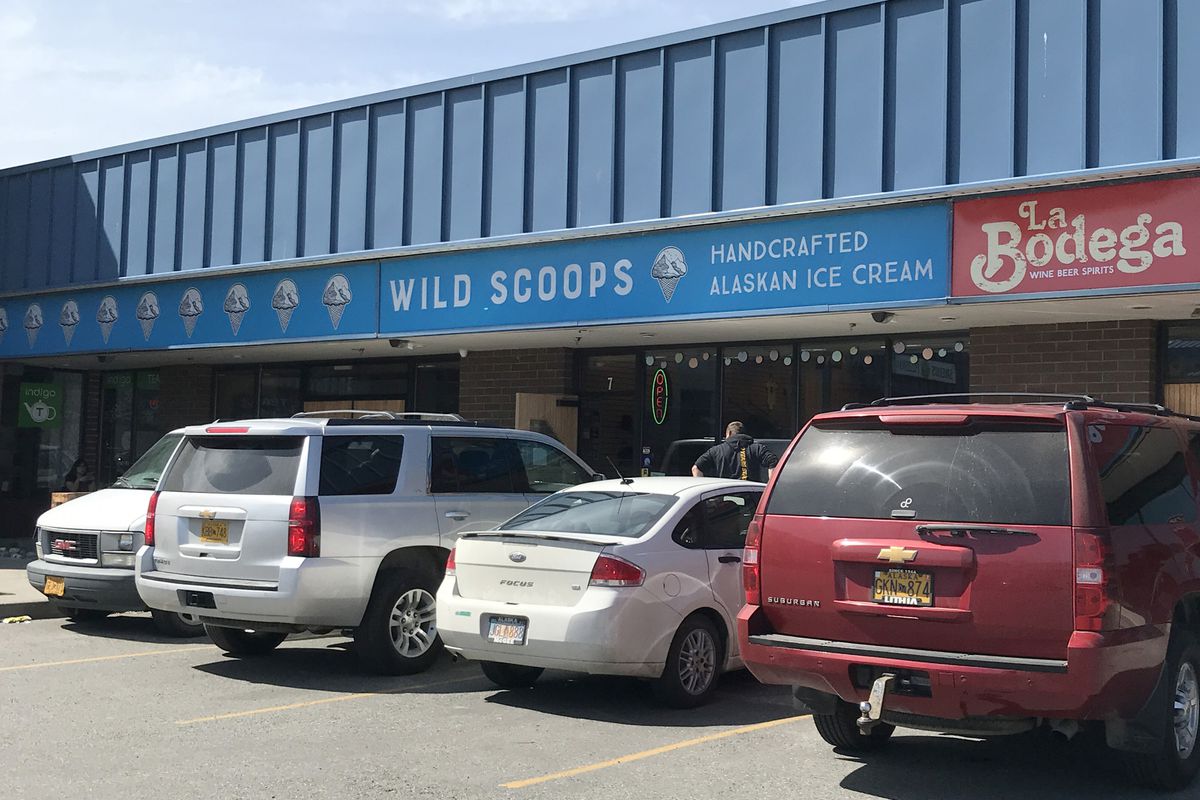 The new Midtown spot at 530 E. Benson Blvd. — in the Metro Mall, next to La Bodega — opened about a week ago. It’s much larger than the E Street location, has seating, and is meant to provide an alternative for people who might not want to venture downtown, especially during the tourist-heavy summer.

“We love the downtown store, but we knew we needed another spot that was a bit more accessible by car,” said owner Elissa Brown.

The need for a bigger kitchen is what prompted the move, Brown said. Wild Scoops used to have a test kitchen in Fairview, and that didn’t have a retail component. Now the business makes all its product at the Midtown spot.

Wild Scoops has already started serving customers at the new store, but it will have an official grand opening on Sunday. Its downtown location opened in May 2017.

Guitar Center: The California-based music equipment retailer opened its first Alaska location Thursday in Anchorage’s Midtown Mall. It will have a grand opening on June 27.

Guitar Center is located between Nordstrom Rack and what will soon be a new Carrs Safeway grocery store. The place was bustling Thursday afternoon as peopled browsed through guitars, drums, keyboards and more.

The retailer’s Alaska debut is part of many big changes at the Midtown Mall this year. REI moved in as an anchor tenant in January, and Planet Fitness opened a location there in February.

Popeye’s: The Popeye’s chicken restaurant on C Street near Benson Boulevard is up and running again, after being closed for months. It reopened this week.

The closure was because of a dispute with the company over the restaurant’s franchise agreement, said Patrick Moses, owner of the Midtown location. He wouldn’t go into more detail as far as what the dispute was about.

But now, "it’s all been resolved,” he said. “So we’re back in business.” Popeye’s has occupied the C Street spot since 2005, Moses said.

Gelatte: A gelato shop is opening soon at 500 W. Sixth Ave., across from Town Square Park.

Gelatte’s grand opening is July 1. Owners Cliff and Sheena Goughnour wanted to fill what they see as a niche in the Anchorage market. Gelatte will be located just a block away from Wild Scoops, but Cliff Goughnour isn’t worried about that.

“It won’t necessarily be a competition,” he said. “Gelato is different than ice cream.”

Along with gelato, the shop will offer Italian pastries and other baked goods.

Chugiak-based aviation product manufacturer Alaska Airframes acquired Alaska Tent & Tarp in January of this year ahead of moving it from Midtown into the Fifth Avenue building that Alaska Airframes owns.

In the specialized aviation market, Alaska Airframes wanted to be able to offer more products to its customers, said CEO Heather Montgomery.

“Our goal is to become the REI for the aviation community,” she said. “Everything you might need for your backcountry lifestyle.”

Tent & Tarp makes products for commercial and recreational customers, including aircraft covers, awnings and — of course — tents and tarps. It also has a Fairbanks location.

Villa Nova Restaurant: This Italian restaurant in a strip mall near the intersection of Arctic Boulevard and International Airport Road closed its doors in early June.

The closure was “simply for financial reasons,” said Shawn Lyons, one of the owners.

“Business had been very slow,” he said, adding that the closure hadn’t been his decision but that of the other owners. Lyons had previously sold 60% of the business to the cooks, he said.

Lyons played guitar at the restaurant for about three decades, and was an owner for five years.

“I was there for 33, 34 years. Certainly a big part of my life is gone,” Lyons said. “I miss it, there’s a lot of memories there. But everything must go its way eventually.”