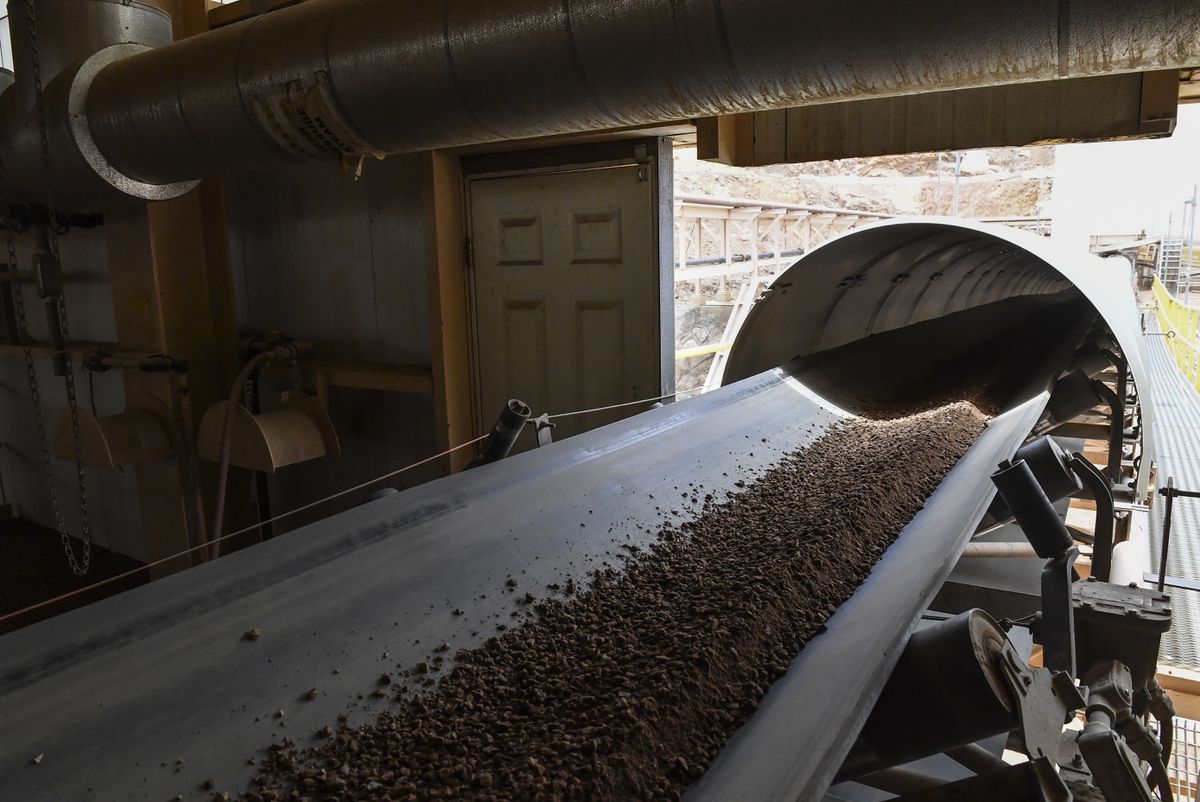 Rare earths product flows down a conveyor belt at the Mountain Pass mine in California, ultimately headed for a processing facility in China. (Washington Post photo by Ricky Cariotti)

Rare earths product flows down a conveyor belt at the Mountain Pass mine in California, ultimately headed for a processing facility in China. (Washington Post photo by Ricky Cariotti)

The Bokan Mountain rare earth underground mine prospect near tidewater on southern Prince of Wales Island holds more than 4.7 million metric tons of indicated rare earth ore, according to a 2015 resource assessment. That translates to approximately 63.5 million pounds of collective rare earth metals, which are used in a plethora of high-tech applications, from smartphones to advanced batteries and fighter jets.

There are 17 minerals defined as rare earth elements, but “heavy” rare earths — such as europium, terbium, and ytterbium with a greater atomic weight — are the most sought after and are used in products that rely on high-temperature magnets. More common lighter rare earths are used in a plethora of applications including LED displays. Heavy rare earths account for roughly 40 percent of the mineralization at Bokan, according to Ucore.

Dunleavy wrote in his letter to Neumayr that the state understands the country’s need for a secure supply chain of rare earths and deeming Bokan a high priority project would help to “ensure the resource is available for development in a reasonable time-frame.”

“America’s dependency on a non-allied, foreign-sourced, critical metals supply chain to support national defense, green energy initiatives, and high-tech product manufacturing is an ongoing concern at both the State and Federal levels,” he wrote.

In 2014, the Legislature approved the Alaska Industrial Development and Export Authority to issue up to $145 million in bonds to help finance the Bokan project. Ucore estimated in 2013 that the mine would cost about $220 million to develop.

For several years, the U.S. imported all of its rare earth elements until the Mountain Pass rare earths mine in southern California reopened last year. That’s a significant concern for many federal officials and policymakers because China is still the primary source for rare earths globally and the Chinese government — already engaged in a tense trade dispute with the U.S. — could restrict the flow of these critical metals.

[China hints it will choke off U.S. ‘rare earths’ access. But it’s not that easy.]

A drop in rare earth prices in 2015 has shifted Ucore’s attention away from the mine in recent years and towards advancing the processing technologies that would be used its refining complex.

Ucore leaders thanked Dunleavy for the letter in formal statements. The company is also working to develop a facility to refine the metals it mines in Ketchikan.

Sen. Dan Sullivan said in a recent interview with the Journal that Defense officials told him about 90 pounds of rare earths go into each new F-35 fighter jet. He suggested China manipulates global rare earth markets to keep metal prices low enough to deter development of rare earth mines elsewhere, thus allowing the country to maintain its position as the world’s primary supplier.

“A (high priority project) designation would shave significant lead time off of the development of a fully permitted project, prospectively delivering us to construction commencement in just over two years,” Ucore Chief Operations Officer Mike Schrider said. “Our fundamental objective is to establish the Bokan-Dotson Ridge resource as a shovel-ready critical mineral reserve for the rapidly expanding domestic technology and defense industry sectors that are dependent on rare earth metals.”

Just four days after taking office in January 2017, President Donald Trump signed an executive order directing the council “to streamline and expedite” the National Environmental Policy Act, or NEPA, process for projects deemed to be a high priority for the nation.

The order allows for governors or federal department executives to request the high priority status and specifically lists electric power grid projects as well as telecommunications systems, pipelines and transportation infrastructure as the primary types of projects that could receive the designation, but it does not explicitly list mines.

According to the order, Council on Environmental Quality Chair Neumayr has 30 days to decide whether a request for a high priority listing should be granted.

Schrider said in a brief interview that Ucore got a letter from Council on Environmental Quality officials Sept. 3 that Dunleavy’s request is being evaluated.

A spokesman for the council did not respond to questions in time for this story.

Schrider said the company is very appreciative of the governor’s efforts and Ucore is examining ways to move ahead with developing the mine at current metal prices.

The next step towards developing Bokan is a detailed feasibility study of the project, according to Schrider.