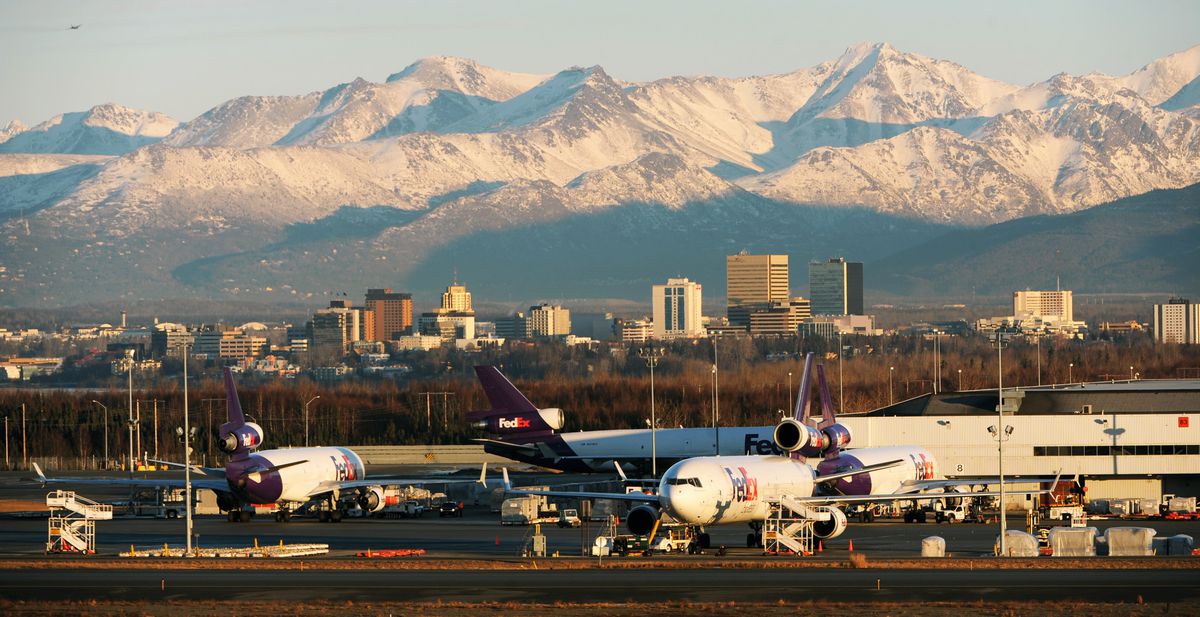 The wave of potential developments, which were made public through applications to lease land at the state-owned airport, comes after years of trumpeting Anchorage’s unique cargo transfer opportunities by airport officials and city leaders.

Anchorage Economic Development Corp. CEO Bill Popp said he’s not exactly sure what caused the recent burst of interest in the airport but he’s very happy to see it.

“There’s been a lot of drumbeating for Anchorage International Airport and it finally appears to be paying off,” Popp said.

Specifically, 6A-XL Aviation Alaska LLC is proposing a 500,000 square-foot cargo transfer facility on the west side of the airport across the north-south runway from the passenger terminals.

6A Aviation Inc. is also proposing a 300,000 square-foot air cargo warehouse at the north end of the airport near Point Woronzof. Both of the 6A proposals are estimated as $170 million projects.

Airport manager Jim Szczesniak said 6A Aviation is a contractor doing pre-development work for other companies. The company’s website does not list contact information and state business license records list an Annapolis, Md., address for the company, but little additional information.

The largest proposal both in terms of size and value is from Alaska Cargo and Cold Storage LLC, which has plans for a $200 million, 700,000 square-foot climate-controlled cargo warehouse facility on a boggy, undeveloped parcel just north of the terminals.

Popp noted the site will be a challenging one to develop because of the ground conditions but said he’s hopeful the company has considered those obstacles and figured out ways to overcome them.

Finally, FedEx is planning a $57 million, 98,000 square-foot domestic operations center that would include the company’s administrative offices, according to the lease application.

A FedEx spokeswoman wrote via email that the company doesn’t comment on business plans until they are final, but Szczesniak said the package delivery giant is likely to move it’s existing Alaska distribution operations into the new building, which would allow the company to support future growth in its international freight business at other facilities.

AEDC is among several groups that for years has pitched Anchorage as a prime place for international air cargo companies to focus their business. That’s because Anchorage — already the fifth busiest air cargo hub in the world — is not bound by the same international trade restrictions as nearly every other airport in the country, or the world for that matter.

Thanks to then Alaska Sen. Ted Stevens, since 2004 foreign cargo can be transferred from one aircraft to another without being subject to customs and other trade requirements or tariffs at the airport that now bears his name.

The same options are available at the Fairbanks airport, but Anchorage has more capacity to handle large aircraft.

Air cargo operators have long stopped their Boeing 747s at Anchorage because of its geography. Alaska’s midpoint location between Asian manufacturing centers and North American consumer markets makes it a prime refueling stop; cargo planes can carry more freight if they refuel here as opposed to making a nonstop transcontinental journey.

However, few cargo companies have regularly utilized the unusual but potentially significant transfer opportunity — particularly given Anchorage’s geographic location — that in theory could make their operations more efficient.

Airport officials and general Alaska trade advocates have said the open shipping options have not attracted business in part because shippers are often skeptical they’re actually allowed; in most places such cargo transfer would be cabatoge, a federal crime.

Airport officials surveyed cargo carriers last fall to gauge the interest in a potential cargo transfer facility and the response was positive enough to investigate the idea further. This spring they sought expressions of interest from cargo industry players.

Anchorage Airport Manager Jim Szczesniak said in an interview that the solicitations at least played a part in attracting the potential business opportunities that are now here.

“You’ve got a pro-business administration coupled with the airport really driving the potential that this place has,” Szczesniak said, referring to Gov. Michael J. Dunleavy’s mantra that Alaska is “open for business” under his leadership. “That’s going to get a lot of traction in the business community.”

The lease applications submitted in July and August do not signal sure-fire projects, but they do prove the demand certainly exists for plenty more warehouse space at the airport, he noted.

“We think that these are good, solid projects, to start the transformation of the airport and really take advantage of the cargo transfer rights,” he said. “We, as the airport, are trying to do more.”

What substance there is behind the proposals will likely be better known next spring when Szczesniak said he hopes the first construction will start on at least a couple of the projects.

He added that cargo industry officials typically correlate 1,000 square feet of warehouse space to one-half to one full-time job. Based on that, the four projects could cumulatively generate between 700 and 1,500 new jobs in Anchorage beyond the initial construction activity.

“We think that this is the first wave of projects because as of right now the tenants haven’t been announced but once that’s public, then their competitors are going to be like, ‘Hey, what are these guys doing in Anchorage; we need to be there, too,’” Szczesniak surmised.

He said airport officials also recently wrapped up a request for qualifications, or RFQ, for developers interested in building a hotel on the airport. They identified an 80,000 square-foot location tucked between the south terminal and airport parking lots.

Officials are evaluating the responses and intend to invite the best five respondents to participate in the final request for proposal, or RFP, step, according to an airport public notice.