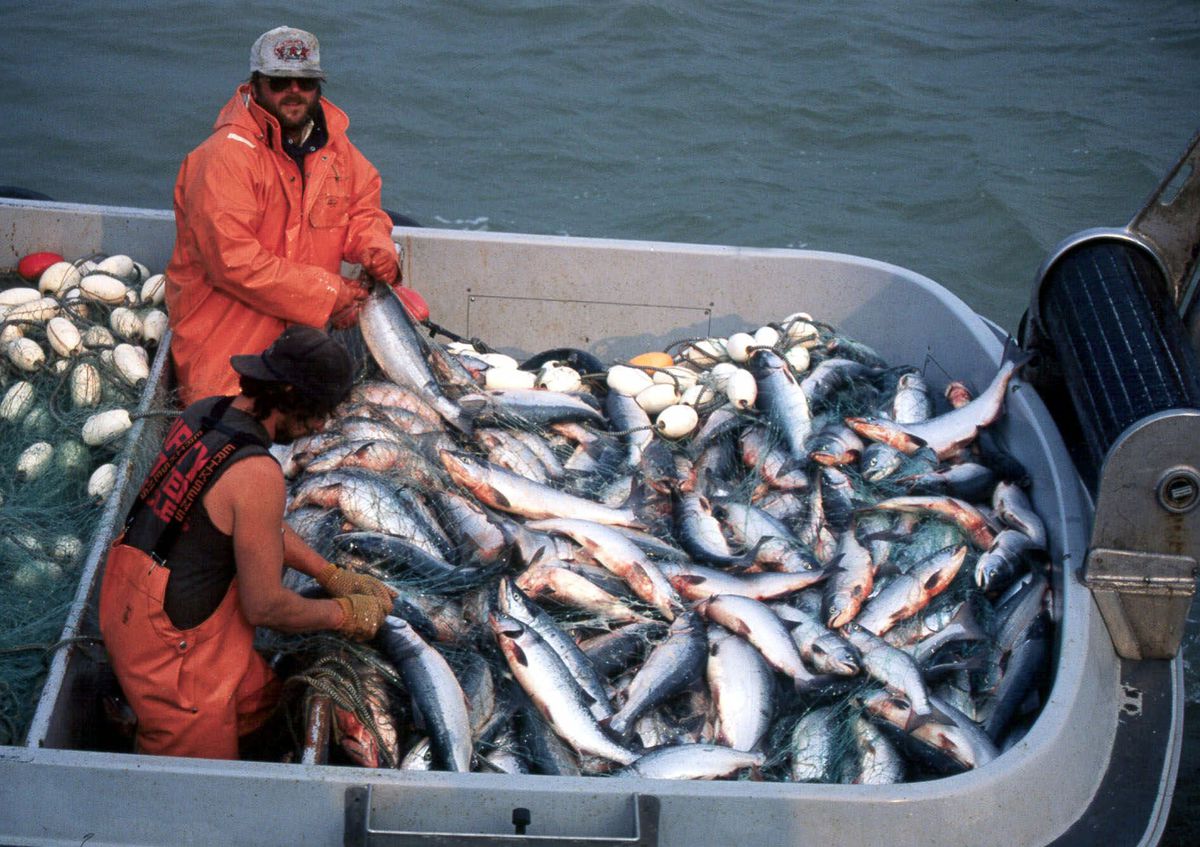 “Unpredictable” is the way salmon managers describe Alaska’s 2019 salmon season, with “very, very interesting” as an aside.

The salmon fishery is near its end, and a statewide catch of nearly 200 million salmon is only 6% off what Alaska Department of Fish and Game number crunchers predicted, and it is on track to be the eighth largest since 1975.

The brightest spot of the season was the strong returns of sockeye salmon that produced a catch of over 55 million fish, the largest since 1995 and the fifth consecutive year of harvests topping 50 million reds. The bulk of the sockeye catch – 43.2 million – came from Bristol Bay, the second largest on record.

It was a roller coaster ride in many regions where unprecedented warm weather threw salmon runs off kilter and also killed large numbers of fish that were unable to swim upstream to their spawning grounds. Many salmon that made it to water faced temperatures of 75 degrees or more in some regions.

“The hot, dry weather for most of the summer resulted in low and warm water conditions in many of the important spawning systems around the state. The salmon had to spend more time in saltwater than they normally would, in the terminal areas near the stream mouths,” said Forrest Bowers, deputy director of the Fish and Game commercial fisheries division.

Despite the heat stress, escapement goals were met in most Alaska regions.

It’s been difficult to get a good census on how many salmon might have perished in the heat wave, Bowers said, but managers are assessing potential impacts on future fish.

“We’ve been taking reports from the public and we’ve had staff out in the field trying to collect information on the extent of those die-offs,” Bowers said. “We’re looking at all the data, but from what we’ve seen, the magnitude is relatively small and we don’t believe it has been significant enough to impact escapement.

“Now, whether the warm water and low water conditions will result in reduced viability of offspring from the fish spawning this year or increase overwintering mortality, that remains to be seen. But those are possibilities,” he added.

The same environmental conditions are playing out favorably for salmon in westward regions, which adds to the unpredictability.

“Particularly north of the Alaska Peninsula and the Bering Sea have been really favorable for salmon production at Bristol Bay, the Yukon, Norton Sound and Kotzebue,” Bowers said. “And we're starting to see salmon move even further into the Arctic. On the North Slope, we're seeing sockeye and pink salmon up there.”

It’s a sign of the times, Bowers added, and the unpredictability brings new challenges to salmon managers.

“It’s difficult to count on traditional run timings,” he explained. “We have so much run timing data for Pacific salmon and Alaska that go back over 100 years for some of the stocks that we rely on for in-season management decisions. With a very compressed run such as at Bristol Bay, even a deviation of a few days creates a lot of uncertainty. Does that mean the run is late or not as large as forecast? So that’s what we’re seeing in the last couple of years, this increased uncertainty in terms of run time and size.”

As salmon fishing winds down, hundreds of boats of all gear types and sizes are going after cod, rockfish, perch, flounders, Alaska pollock and many other species.

Alaska halibut longliners have taken 73 percent of their nearly 18 million-pound catch limit with less than 5 million pounds remaining. Homer leads all ports for halibut landings followed by Seward and Kodiak.

So far 58 percent of the nearly 26 million pound sablefish quota has been caught. Sitka has topped Seward as the usual leading port for sablefish landings, with Kodiak third.

Both the Pacific halibut and sablefish fisheries end on Nov. 14.

Fall means the start of dive fisheries for pricey sea cucumbers. On Oct. 7, divers will head down for nearly 2 million pounds of cukes in Southeast Alaska.

A much smaller sea cucumber fishery of 165,000 pounds opens on Oct. 1 at Kodiak, Chignik and the South Peninsula. Red sea cucumbers last year paid out at over $4 a pound to fishermen.

Also in Southeast Alaska – the Dungeness crab fishery will reopen Oct. 1 in a year that could be the best in a decade.

Here’s a new one: The Alaska Department of Fish and Game has established a season for the commercial harvest of detached kelp that has washed up on beaches in Lower Cook Inlet.

Share personal glimpses of your fishing life in photos, songs, stories, art, poems, musings and mischief in the second Alaska Young Fishermen’s Almanac. The call for submissions is going on now.

“It’s a window into the lifestyle that so many of us live here in Alaska,” said Jamie O’Connor, a fisherman and head of the Alaska Young Fishermen’s Network, an arm of the Alaska Marine Conservation Council.

The almanac is modeled after a publication for farmers that dates back to 1792. Last year’s 141-page inaugural edition featured nearly 60 items from almost every Alaska region. It serves as a “cultural touchstone” for fishermen that reinforces their sense of community, O’Connor said, adding that she’s been pleasantly surprised at how popular the book has been with non-fishing people.

Ultimately, the almanac celebrates the culture and builds understanding of the fishing life.

The Alaska Young Fishermen’s Almanac will be available in mid-November, just in time for holiday gift giving. Deadline for submissions is Oct. 1.

Fish bucks give back

American Seafoods Co. is again offering grants for community programs at Kodiak, the Aleutian and Pribilof islands, Alaska Peninsula, Bristol Bay, Lower Kuskokwim, Lower Yukon, Norton Sound and regions north. The majority of grant awards will range from $1,000 to $7,500 and be based on the need in the community, the number of people who will benefit from the program and the ability to garner matching funding.