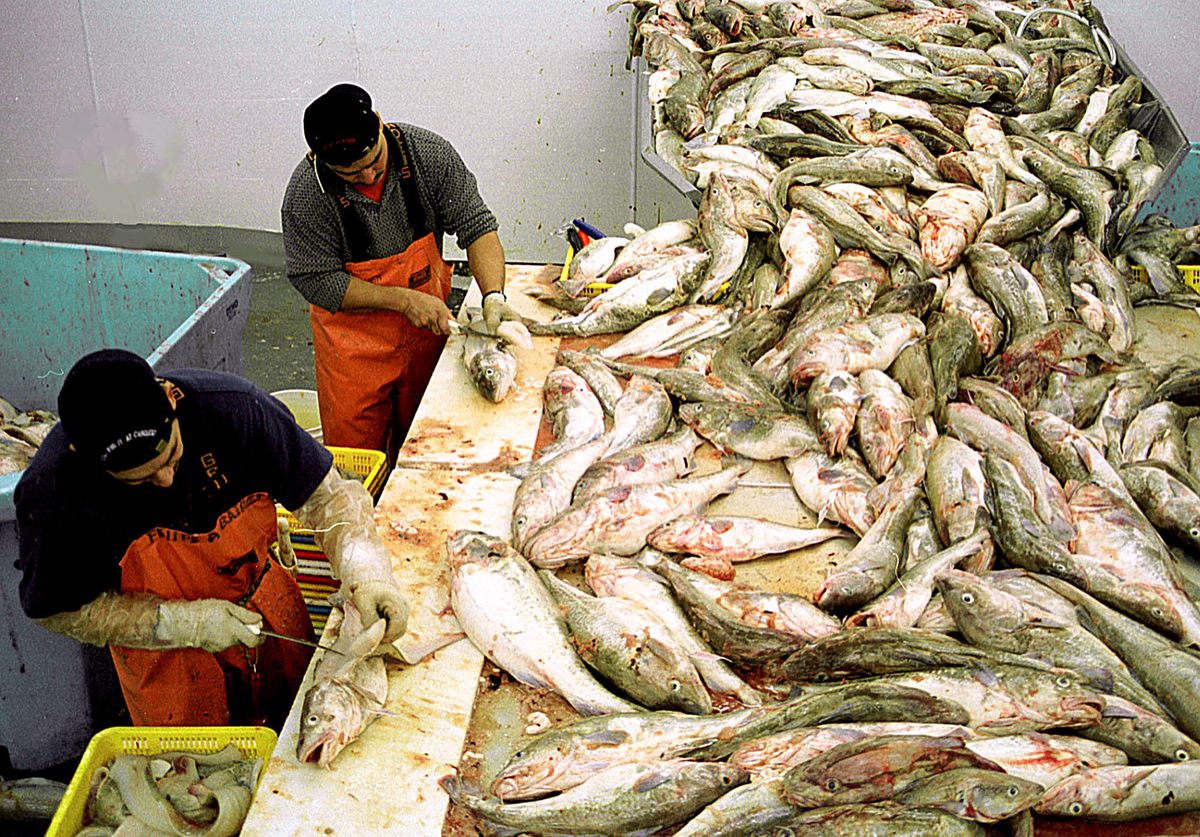 Workers at Island Seafoods in Kodiak fillet Pacific cod in this file photo. A federal disaster was declared for the 2018 Gulf of Alaska Pacific cod season after an 80 percent cut in the harvest quota, and members of Congress and the administration are working on ways to streamline the relief process. (AP Photo/ Marion Owen)

Workers at Island Seafoods in Kodiak fillet Pacific cod in this file photo. A federal disaster was declared for the 2018 Gulf of Alaska Pacific cod season after an 80 percent cut in the harvest quota, and members of Congress and the administration are working on ways to streamline the relief process. (AP Photo/ Marion Owen)

With an increasing number of fisheries disaster requests coming from all over the United States, members of Congress and the federal government are looking for ways to improve the relief process.

Summer 2018 brought disappointing results for many fishermen across Alaska, particularly for sockeye salmon fishermen in the central Gulf of Alaska, but only two fisheries were officially granted federal disaster declarations: the 2018 Chignik sockeye salmon run and the 2018 Pacific cod fishery. While many other fishermen at least got a few fish to fill their wallets, Chignik fishermen had virtually no season, and Gulf of Alaska Pacific cod fishermen saw their total allowable catch reduced by 80 percent from 2017 because of low abundance.

U.S. Secretary of Commerce Wilbur Ross announced a dozen commercial fishery disaster declarations Sept. 25 for the 2018 calendar year. Congress appropriated $165 million for fisheries disaster relief, to be allocated according to the losses in revenue for the selected fisheries.

It’s the second time in recent years there have been disastrously poor returns to some fisheries. In 2016, the failed pink salmon run across the Gulf of Alaska left many fishermen holding empty nets, particularly in Kodiak and Prince William Sound, resulting in a disaster declaration in 2017 and eventually $56 million in relief funds for stakeholders.

However, because of the long federal application and funding process, fishermen just received those disbursements in July 2019, nearly three years after the disaster.

The slow process isn’t unique to Alaska. Senate Bill 2346, introduced by Sen. Roger Wicker, R-Miss., in July, seeks to speed up that process, in part by expediting relief funds being disbursed to fishermen. It also seeks to add avenues for relief for non-commercial fishermen, including charter operators.

Fisheries disasters can be awarded in a variety of circumstances, including natural disasters, undetermined causes or causes beyond the control of fisheries managers. However, the current process only includes commercial fisheries, said Chris Oliver, the assistant administrator for the National Marine Fisheries Service.

“I think the law should provide clarity and direction to us as to whether we could and should include (charter or sport fisheries) revenue losses in the calculation,” he said in a Sept. 25 hearing of the Senate Committee on Commerce, Science, and Transportation.

NMFS is aware of the delay problem and is actively developing regulations for the disaster process that will streamline and improve it, Oliver wrote in his testimony to the committee. He wrote that SB 2346 aligns with many of the federal administration’s priorities for streamlining the process, such as providing deadlines for key steps in the process and clear requirements for what requestors need to submit.

Rachel Baker, the deputy commissioner for the Alaska Department of Fish and Game, wrote in her testimony to the committee that while the process of declaring a disaster is well understood, distributing relief monies is less clear. The delay may make the process seem less useful to stakeholders, she wrote.

“Under the current process, there is little to no guidance for requestors or the public describing the steps in the process or the criteria being used by the federal government to evaluate proposed spending plans for disaster relief funds,” she wrote. “This lack of clarity makes it challenging to navigate the process and inform affected fishery participants and the public about the potential outcomes and timelines for evaluation of a proposed spending plan and the distribution of disaster relief funds.”

During the hearing, Sen. Dan Sullivan asked Oliver if the bill should provide more guidance to the National Oceanic and Atmospheric Administration and NMFS on how to determine disaster declarations and funding.

“I think part of the point of the bill is that NOAA and, significantly, (the Office of Management and Budget) might have too much discretion under current law and not enough direction when it comes to the fisheries disaster process,” Sullivan said. “(Wicker’s) bill remedies that.”

Ron Warren, the director of fish policy for the Washington Department of Fish and Wildlife, wrote in his comments that Washington has seen an increase in both the frequency and severity of fisheries disasters due to natural disasters since 2008, disrupting the state’s significant fishing economy.

The delay in relief funding following the 2015 coho disaster was “especially concerning,” he wrote, as the request from Washington had been fast-tracked.

“Given that NOAA scientists have noted another marine heatwave occurring off Washington’s coasts since June of this year, which may be comparable to that observed in 2014, our fisheries could face another disastrous year in 2020,” he wrote. “If that occurs, the local businesses within our fishing communities cannot wait another three years for any potential relief. These processes must be streamlined and improved — it’s that simple.”

The Washington Department of Fish and Wildlife raised a few concerns about the bill in its current form, noting that the bill should ensure fast-tracked disaster relief funding shouldn’t come from other areas of NOAA operations and that fisheries remain a priority, especially when competing with aquaculture operations, Warren wrote.

In their comments, multiple senators connect climate change impacts with increasing instability in fisheries. Outside Alaska, multiple Florida fisheries have been impacted for the past four years by increasingly pervasive algal blooms, and the flooding in the Mississippi River basin in 2019 led to freshwater incursion into the delta and Lake Pontchartrain, killing the majority of the oysters in the Mississippi Sound.

Warren told the committee that scientists have connected the recent decline in salmon runs to “the Blob,” a persistent ocean temperature anomaly in the Pacific Ocean from 2013-16 that was connected to a number of ecosystem disruptions. Oliver said in answer to a question that NMFS doesn’t have “the specific data” to say whether climate change will definitively increase fisheries disasters, though scientists have generally agreed that warmer ocean waters have contributed to an increase in harmful algal blooms and increased hurricane frequency.

“I think that we are seeing movement of fish from one area to another,” Oliver said. “Whether those particular fish patterns of movements as they’re affected by warm water result in disasters would be difficult for me to speculate. Whether those changes result in fisheries disasters or not, we are in a constant pattern of trying to understand that so we can respond.”